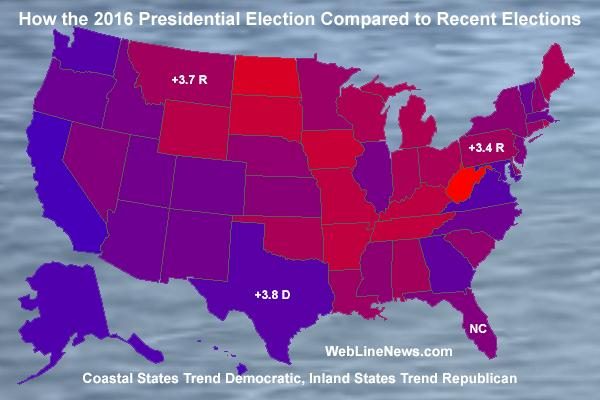 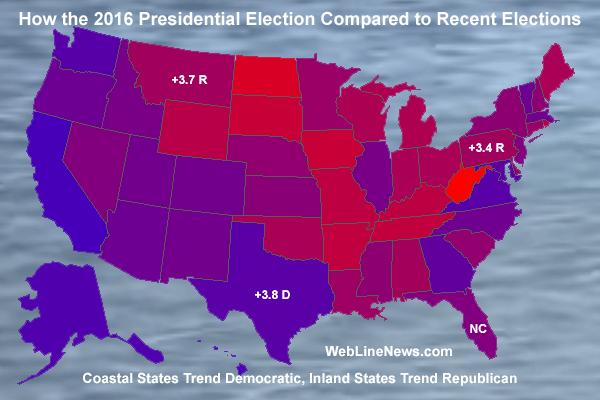 Here’s how it works: the states of Florida, New Jersey and Nevada, moved very little, and represent the purest purple. As states become more blue, the Democrat did better than history suggests, as states become more red, the Republican did better than history suggests. Contrast is amplified ten times to make trends easier to see. A state with a ten percent swing would become pure blue or red.

California went 58.6 Democrat and 41.4 Republican on average in the prior four elections. In 2016, it went 64.2 Democrat and 35.8 Republican. The swing was Democrat +5.6. Therefore, the color for California is just over three-quarters blue to one-quarter red (or blue 184 to red 71 to be exact).

New York went 62 Democrat and 38 Republican on average in the prior four. In 2016, it went 60.8 Democrat and 39.2 Republican, with a swing of +1.2 Republican. For this, the state is slightly red even though it remains a Democratic stronghold.

There are two exceptions. First, West Virginia trends at nearly +14 Republican. For this state only, the color is ‘bottomed-out’ at pure red. Second, Utah had a very large third party vote for Libertarian Gary Johnson that took away from Republican Donald Trump. Because of this anomaly, the two candidates were added together and counted as Republicans. In other states, third parties were ignored and the two major candidates were considered only in ratio to each other, always totaling 100 percent.

Looking at the map, there is a curved region from Texas to Virginia where some states are trending blue, but right above that, interior southern states are trending solidly red: Iowa (7.1), Missouri (6.0), Arkansas (6.4), Tennessee (6.7), Kentucky, and of course West Virginia (13.8).

THE NOTORIOUS BLUE WALL AND NEARBY

The “blue wall” states are traditional manufacturing states where Democrats usually won elections in the recent past. These states have been described also as “rust belt” states. Five of these states trended slightly Republican in 2016 — and this is where most pundits say the slim election victory was won. Here are the trends: Minnesota (+2.4 Republican), Wisconsin (4.4), Michigan (4.7), Indiana (4.2), Ohio (4.2), Pennsylvania (3.4), and Illinois (+0.5 Democrat) which stands out against the trend because it contains the big city of Chicago.

As per the overall trends of coastal and border states trending blue and interior states trending red, the west coast fits perfectly. California is the bluest trending state, gaining 5.6 percent on top of a large majority. Washington (3.9), Oregon (1.8) and Hawaii (5.2) all won by Democrats trend more blue. Alaska (4.6) is also trending blue, but remains 58 percent Republican.

The rest of the states are in the northeast and on the east coast. All went significantly Democratic, except New Hampshire and Maine were very close.