A few days ago, “news” icon The Washington Post (WaPo) was exposed by FAIR.org for campaigning against Democratic presidential candidate Bernie Sanders with a barrage of negative stories before the Michigan primary. The paper responded by defending its 16 negative stories in 16 hours. A summary of these events is below, under the heading “Background.”

Now, The Washington Post has rolled out a black woman writer, Janell Ross, to escalate its obsessive attacks against Bernie Sanders from a racial angle.

News reporter Janell Ross published a story in WaPo entitled “Bernie Sanders’s most vitriolic supporters really test the meaning of the word ‘progressive.’” Janell Ross begins with a short paragraph conceding facts: (1) Sanders may make it to the convention, (2) Sanders won in the important state of Michigan, and (3) Sanders gained more support from the black population in that state than expected. But then, Janell Ross writes:

That’s the good news for him. This post will admittedly not be about that. So, Sanders voters — particularly those keyboard gangsters, frequent commenters and tweeters, and those convinced of a grand media conspiracy to end the Sanders campaign — prepare.

After all that name-calling, Janell Ross invokes an article at The Intercept which found that misogynistic stereotypes of Bernie Sanders by reporters was mostly a “media generated fiction.” The referenced article provided statistics in support of its claim. Nevertheless, Janell Ross reasserts that this “BernieBro” phenomenon is very real.

But the emails, Twitter messages and comments I have received tell a different story. They use a variety of curse words and insults typically reserved for women. More than one has suggested that I deserve to become the victim of a sex crime. They critique the “objectivity” of what is clearly political analysis based on polling data and other facts; they insist that black voters are dumb or that I have a personal obligation to help black voters see the error of their Clinton-voting ways. It is vile… We could print the emails. But those of you who sent them know who you are and the horrendous things said.

Janell Ross bases her claims mostly on personal experience. She says she will only print some of the evidence. She fails to quantify her “different story” with any meaningful numbers. Rather, she uses the same tactic as notorious partisan website Breitbart — pointing at a few things to imply big generalizations.

It is terrible that Janell Ross has been told she should be a sex crime victim. Bernie Sanders would not condone such a statement from his supporters. It is even worse when such an attack would come from “more than one” person. But it is not enough for her to justify using the word “they” repeatedly to describe Bernie Sanders supporters and suggest that all of them are “vitriolic” — as the headline does.

While the above claims are all personal, Janell Ross provides evidence for some of her statements. She describes a Twitter feed hashtag #MississippiBerning which is “arguably tasteless.” Arguments can occur all day long. Numbers cannot be argued so easily. First, searching the hashtag at Twitter and scrolling to the bottom, the entire existing history of the term is apparent. There simply is not that much of it. Compare: Bernie Sanders has 1.65 million followers. Second, reading the actual content of the Tweets indicates far more disapproval than support for use of the hashtag. Janell Ross misses these two points, thereby tagging all Bernie Sanders supporters. Third, anonymous online commentaries may be done by “trolls” anyway, which Janell Ross admits, then continues, “But the fact is that many, many people used it.” 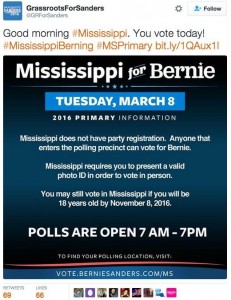 Janell Ross provides an edited screen shot of one offensive post that was deleted. Here is the unedited screen shot. Unlike the picture at WaPo, total Likes (69) and Retweets (66) are not missing on this one. Compare: these numbers are tiny slice of the 1.65 million Bernie Sanders followers on Twitter.

If a person is looking for “vile” behavior to discredit a cause or candidate by pointing to the behavior of a few supporters, it can always be found. Where a “reporter” has actively promoted one candidate over another at a “news” organization that incessantly streams negative stories against the other candidate, some angry people are going to cross the line. Tiny numbers do not support big notions. Notorious partisan site Breitbart uses this tactic everyday.

The accusations by Janell Ross against Bernie Sanders are about as baseless as charges get.

While Janell Ross has made it “vitriolically” clear that she supports Hillary Clinton over Bernie Sanders and does so without objectivity, a review of her Twitter feed indicates a bigger picture. There are zero posts reflecting negatively upon Ted Cruz since March 1 — when primary season kicked into full gear. The feed is full of posts against Donald Trump. Janell Ross is worried about Donald Trump’s rhetoric while she gives the establishment Republican a total free pass on his reactionary policies that affect race and gender issues. Janell Ross seems to be more of an establishment supporter than a rights advocate — regardless of party.

Before anyone tries to make accusations of “vitriol” or “racial cluelessness” here …
For those who would like to learn from someone who is not just an establishment partisan masquerading as a news reporter, try noted black rights author Dr. Joy DeGruy, noted law professor and author Gloria Browne-Marshall, and so many long-time reporters including Glenn Ford or Milton Allimadi, or even white man Tim Wise, etc. There are plenty of activists for the rights of black people who are well-known, well-educated, articulate and far more objective than Janell Ross. WaPo doesn’t have them.

On March 8, the WaPo flood of negative coverage about Bernie Sanders was exposed by Fairness and Accuracy in Media (FAIR). FAIR produced this graphic to punctuate the bias.

After the FAIR graphic was published, and due to extraordinary interest in the expose, WaPo felt pressure to answer the charge swiftly, asking “Has The Washington Post been too hard on Bernie Sanders this week?” FAIR decided to respond to the WaPo defense, noting “Shocker: WaPo Investigates Itself for Anti-Sanders Bias, Finds There Was None.” From the second FAIR article:

Right off, the framing is inaccurate: The scope wasn’t “this week,” it was a 16-hour period after the Flint, Michigan, debate—and following a weekend in which Sanders won three of four state contests with Hillary Clinton. The do-or-die stakes for Sanders in Michigan couldn’t have been higher … The reason the graphic and FAIR’s blog post went so viral is because people can intuitively look at a litany of stories over such a short period and see bias.