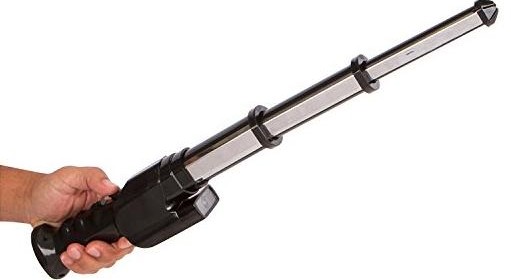 The unanimous Supreme Court, 8-0, overturned the top court of the state of Massachusetts in a summary decision without any hearing, to protect the rights of stun gun owners. The order was marked “per curiam,” meaning that no single Justice signed it. There were no dissents.

The Court based its summary reversal upon two highly-disputed Supreme Court cases. In the 2008 case District of Columbia v. Heller, a divided 5-4 Court ruled for the first time that the Second Amendment protects the rights of people in Washington DC to own hand guns. A local law requiring that all handguns be made inoperable in the city was overturned. Then, in the 2010 case McDonald v. Chicago, a similar law was overturned thereby applying the Heller reasoning to states and municipalities. Here is the entire short decision minus some citation references.

The Court has held that “the Second Amendment extends, prima facie, to all instruments that constitute bearable arms, even those that were not in existence at the time of the founding,” District of Columbia v. Heller, and that this “Second Amendment right is fully applicable to the States,” McDonald v. Chicago. In this case, the Supreme Judicial Court of Massachusetts upheld a Massachusetts law prohibiting the possession of stun guns after examining “whether a stun gun is the type of weapon contemplated by Congress in 1789 as being protected by the Second Amendment.” The court offered three explanations to support its holding that the Second Amendment does not extend to stun guns.

The court next asked whether stun guns are “dangerous per se at common law and unusual,” in an attempt to apply one “important limitation on the right to keep and carry arms.” In so doing, the court concluded that stun guns are “unusual” because they are “a thoroughly modern invention.” By equating “unusual” with “in common use at the time of the Second Amendment’s enactment,” the court’s second explanation is the same as the first; it is inconsistent with Heller for the same reason.

Finally, the court used “a contemporary lens” and found “nothing in the record to suggest that [stun guns] are readily adaptable to use in the military.” But Heller rejected the proposition “that only those weapons useful in warfare are protected.”

For these three reasons, the explanation the Massachusetts court offered for upholding the law contradicts this Court’s precedent. Consequently, the petition for a writ of certiorari and the motion for leave to proceed in forma pauperis are granted. The judgment of the Supreme Judicial Court of Massachusetts is vacated, and the case is remanded for further proceedings not inconsistent with this opinion. It is so ordered.

The Supreme Court said essentially that the Massachusetts court was so obviously wrong that its decision had to be overturned without a hearing. Even though the two prior decisions in Heller and McDonald were 5-4 opinions, the entire Court respected the precedents. The result of this decision is to fortify protection of gun rights against those who may continue to try to find ways around them. Gun rights are now much more secure than they were yesterday.

After a “bad altercation” with an abusive boyfriend put her in the hospital, Jaime Caetano found herself homeless and “in fear for [her] life.” She obtained multiple restraining orders against her abuser, but they proved futile. So when a friend offered her a stun gun “for self-defense against [her] former boyfriend, Caetano accepted the weapon.

It is a good thing she did. One night after leaving work, Caetano found her ex-boyfriend “waiting for [her] outside.” He “started screaming” that she was “not gonna [expletive deleted] work at this place” any more because she “should be home with the kids” they had together. Caetano’s abuser towered over her by nearly a foot and outweighed her by close to 100 pounds. But she didn’t need physical strength to protect herself. She stood her ground. She displayed the stun gun, and announced: “I’m not gonna take this anymore … I don’t wanna have to [use the stun gun on] you, but if you don’t leave me alone, I”m gonna have to.” The gambit worked. The ex-boyfriend “got scared and he left [her] alone” …

By arming herself, Caetano was able to protect herself. And, commendably she did so by using a weapon that posed little, if any danger of permanently harming either herself or the father of her children.

Under Massachusetts law, however, Caetano’s mere possession of the stun gun that may have saved her life made her a criminal.