There is no way to stop Donald Trump from pardoning himself as long as he is not under impeachment. If Donald Trump takes the huge step of self-pardoning, it is done. Despite speculation otherwise, such a pardon would be considered valid under the law. 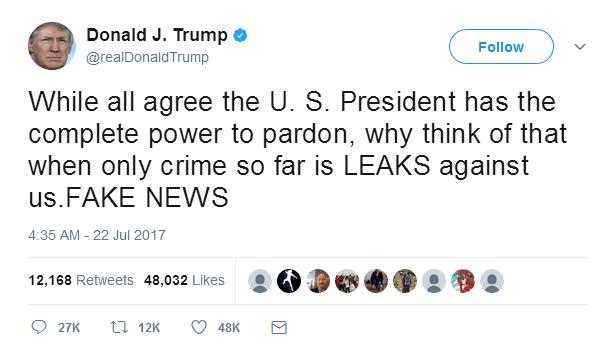 DONALD TRUMP OUT OF OFFICE

If the case must go through appeals, it ends up at the recently renewed 5-4 Republican Supreme Court. This court will protect Republican Donald Trump just like it protected George W. Bush in the 2000 case Bush v. Gore. In that case, five members of the Supreme Court interfered in traditional state law to stop the vote count in Florida and hand the election to George W. Bush.

Three of those five members are off the Court now. Two were replaced by George W. Bush himself and have shown to be more Republican friendly than their predecessors. One Neil Gorsuch was nominated by Donald Trump and approved narrowly by a Republican Senate after refusing to consider the March 2016 Barack Obama nomination of Merrick Garland. This Court will decide in favor of Donald Trump.

Someone could initiate a prosecution for criminal violations. This situation avoids the standing issues above. In such a novel case, Donald Trump would move to dismiss the case by pointing to a “valid” pardon to challenge the prosecution at the outset.

Federal courts are not going to look at any nuance, as the Constitution says plainly, “The President … shall have Power to grant Reprieves and Pardons for Offenses against the United States, except in Cases of Impeachment.” There are no exceptions.

Even if there were exceptions, federal courts will not look at them. Recently, there have been two clear claims of Constitutional violations involving presidential candidates who allegedly failed to meet the Constitutional conditions to run for president. In one 2008 case, Barack Obama was sued [PDF] repeatedly for not being a “natural born” citizen. In the other case during the same election, John McCain was challenged for the very same thing.

In both cases, Constitutional claims were arguably valid. If someone could prove that Barack Obama was born in another country, then the Constitution says he cannot ascend to the presidency. Further, if someone could show that the “natural born” statute extended the definition beyond its meaning in the Constitution, then John McCain too could be excluded eligibility.

But courts did not even look at these questions. Both cases were dismissed for lack of jurisdiction. Courts did not have the power to consider these cases.

Daniel Hemel and Eric Posner wrote an article in The New York Times (NYT) where they proposed, “If Trump Pardons, It Could Be a Crime“:

But could a pardon be a criminal abuse of power? Some would argue that would contradict the founders’ vision of unlimited pardon authority. If a president sold pardons for cash, though, that would violate the federal bribery statute. And if a president can be prosecuted for exchanging pardons for bribes, then it follows that the broad and unreviewable nature of the pardon power does not shield the president from criminal liability for abusing it…

This notion of “founder’s vision” is fanciful. The pardon power exists under the Constitution. As we all know, the Constitution is the “Supreme law” of the nation. A bribery statute is subservient to the law of the land. The Constitutional power to pardon wins. In its next paragraph, NYT rejects this argument anyway, but on different grounds. After the NYT authors agree that their bribery idea would not happen, they come up with another scenario:

This idea has the same problem as the first, but also provides an advisory to Donald Trump should he decide to pardon himself: he should make sure that his pardon plainly covers any possible crimes including obstruction of justice.

Congress may impeach Donald Trump if he pardons himself and remains in office. This is purely a political process. An impeachment and removal of Donald Trump would require extraordinary political circumstances beyond what we see now. In any case, the pardon would still be valid for reasons above, impeachment or not.