With Donald Trump missing from the last debate before the Iowa caucus, other candidates had more time to discuss their plans. The discussion was very illuminating, as one candidate after another rushed to paraphrase from a recent strategy plan white paper by American Enterprise Institute (AEI).

The plan, “To Rebuild America’s Military,” [PDF] was released last October to little coverage. The plan was written by the same authors who penned the “Bush doctrine.” A brief history of this plan, its writers, and prior related ‘military industrial complex’ war plans was covered more extensively in an earlier article.

In last night’s Republican debate, three candidates in particular stumbled over each other in competition to let the war machine know they will “rebuild” the military. Huge sums of campaign funding are on the line for the candidate who best supports this elitist operation.

Nobody on television last night mentioned the report itself. Yet, it was clear that “To Rebuild America’s Military” was the main central plan of the Republican Party for 2016. Here are some quotes.

Marco Rubio ran with it first, using the “rebuild” buzzword twice in a short comment.

MARCO RUBIO: That’s why when I’m president we are going to rebuild our intelligence capabilities. And they’re going to tell us where the terrorists are. And a rebuilt U.S. military is going to destroy these terrorists.

Ted Cruz then described the report in detail, which lamented the “rebalancing” of the military by Barrack Obama, as covered in the earlier article.

TED CRUZ: It is a different, fundamental military strategy than what we’ve seen from Barack Obama. Barack Obama right now, number one, over seven years, has dramatically degraded our military. You know, just two weeks ago was the 25th anniversary of the first Persian Gulf War. When that war began, we had 8,000 planes. Today, we have about 4,000. When that war began, we had 529 ships. Today, we have 272.

Ted Cruz appeared to be attempting to highlight details similar to this chart on page four of the white paper. Although his exact numbers and examples were different, the idea was precisely the same. 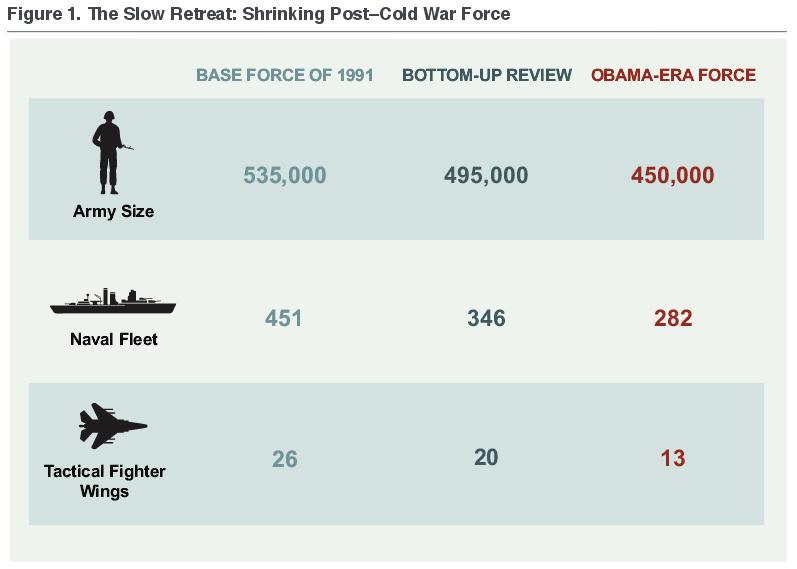 Ted Cruz also mentioned nearly the exact report title in perfect order. He appeared to be speaking directly to elite campaign funders rather than the American people.

TED CRUZ: We need to rebuild the military to defeat the enemy. And we need to be focused and lift the rules of engagement so we’re not sending our fighting men and women into combat with their arms tied behind their backs. (Emphasis added)

MARCO RUBIO: Today, we are on pace to have the smallest army since the end of World War II, the smallest navy in 100 years, the smallest air force in our history. You cannot destroy ISIS with a military that’s being diminished. When I’m president, we are rebuilding the U.S. military because the world is a safer and a better place when America is the strongest military in the world.

WHITE PAPER SUMMARY: No administration since the end of the Cold War has made the long-term investments necessary to sustain the armed forces.

WHITE PAPER: defense spending [in 1961] consumed about 8 percent of GDP … 2016 is less than 3 percent of GDP (page 39) … Congress and the executive branch should set as national policy the longer-term goal of spending, at minimum, 4 percent of the country’s GDP on defense. (page 69).

While the white paper looked at GDP,  this chart looked at the value-added base of production in the United States and found a remarkable spike in the ratio of the military to all production. Viewed this way, the ratio may be unsustainable.

The white paper also discussed military divisions, ISIS, and the need to have a “balance” where the US has the strongest military in all areas throughout, as echoed in the Rubio statement.

Ted Cruz then tied the white paper to other popular issues, synthesizing a broad policy, and mentioning military divisions that were covered extensively in the white paper.

TED CRUZ: What Reagan did is he began with tax reform and regulatory reform, unleashing the engine of the American free enterprise system. It brought booming economic growth and that growth fueled rebuilding the military. I intend to do the exact same thing to defeat radical Islamic terrorism and to devote the resources from the booming economy to rebuilding our navy, rebuilding our air force, rebuilding our army and ensuring we have the capacity to keep this country safe.

Finally, Jeb Bush pointed out that he too will “rebuild” the military. Jeb Bush already had the advantage here, as he has been speaking about this policy since soon after the October white paper came out.

JEB BUSH: As president I will restore and rebuild our military, restore the alliances and keep us safe.

SILENCE ABOUT THE SOURCES OF THESE POLICIES

Despite all the “rebuilding” talk, nobody dared to mention the white paper by name and source — not the candidates — not the hosts. This is a rerun of what happened in 2000, when “Rebuilding America’s Defenses” was the secret white paper that nobody would mention. It was only after the policy was implemented that this earlier report became known. Both reports shared the same authors.

Marco Rubio also used buzzwords from the 2000 white paper by the group Project for a New American Century, whose main paper, “Rebuilding America’s Defenses,” was written by the same authors as the current one. With this performance, it is no wonder why Marco Rubio has been favored by the establishment lately.

MARCO RUBIO: America’s light will shine again and the 21 century will be a new American century. (Emphasis added)

Ted Cruz went way back to cite the Carter era. This too came from the new white paper, but also from the much earlier related policy group, the Committee on the Present Danger.

TED CRUZ: just like Jimmy Carter weakened our readiness, undermined our ability to defend this country, so too has Barack Obama.

THIS IS WHERE THE BIG MONEY IS

American Enterprise Institute (AEI) is the organization that published the white paper. David Koch, one of the two most prolific ‘independent’ campaign funders (along with his brother Charles) is on the board of this group. AEI is funded by the Koch brothers and by some of the most familiar members of the war-promotion complex: Bradley Foundation, Scaife Foundation, Smith Richardson Foundation, and tobacco company Phillip Morris. See the Sourcewatch article.

By paraphrasing this report in the debates, candidates are asking for a big chunk of the promised nine-figure sum that these foundations and those connected to them will provide for the election. By not supporting the white paper, they may be out of the running for the money. For example, Rand Paul should not expect much money from the electioneering billionaires.