Popular website Reddit banned and shut down the user community “Pizzagate” for “the proliferation of personal and confidential information” commonly referred to as ‘doxxing’ which is against Reddit terms. The ban notice also declared, “We don’t want witchhunts on our site.” Users responded by cursing at the account of Steve Huffman, Reddit CEO.

Steve Huffman going by user name “Spez” was then triggered to alter user comments directed at his account, stoking the outrage further. After he was caught meddling with the content of user comments, Steve Huffman admitted it and apologized.

Hey Everyone,
Yep. I messed with the “fv@k u/spez” comments, replacing “spez” with r/the_donald mods for about an hour. It’s been a long week here trying to unwind the r/pizzagate stuff. As much as we try to maintain a good relationship with you all, it does get old getting called a pedophile constantly. As the CEO, I shouldn’t play such games, and it’s all fixed now. Our community team is pretty pissed at me, so I most assuredly won’t do this again.
Fv@k u/spez. 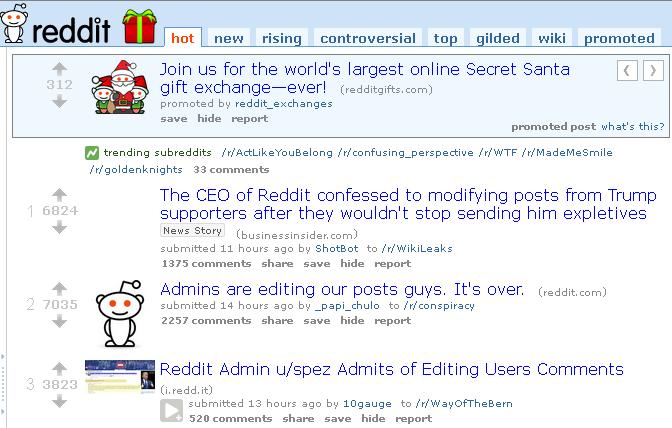 The main community supporting Donald Trump has over 300,000 members. Concerned about a potential shutdown, a post was made warning users:

we do not tolerate doxxing or the release of PII in any way, shape, or form on our subreddit. As it is has been seen with the fate of r/pizzagate, the admins of Reddit take this very seriously, and not closely following this site-wide rule as a community can put any subreddit at jeopardy.

Reddit is a popular social media bulletin board site. Anonymous users post articles and other web submissions to community boards then post comments under the articles. Posts are ordered based on a formula loosely related to age of post and current score or “karma.”

Voat is a similar site that prides itself on virtually unlimited speech. In the past few days, the Voat community Pizzagate has increased from 2565 users to over 4000 as of now.

Pizzagate is internet speculation about a cryptic set of emails released before the 2016 election by WikiLeaks. Some Donald Trump supporters claim that the emails are using terms to hide a pedophilia ring. Hillary Clinton is one of the ringleaders.

TheDailySheeple published a chronicle of apparent connections with some of the strange pizza-related quotes from the WikiLeaks emails:

In the most recent Reddit question and answer session with Julian Assange, he was asked about the pizza emails.

QUESTION: Are those of us investigating the Comet Pizza/Human Trafficking scandal on the right track? And if not, where should we be looking?
EDIT: This is very real and we need to SAVE these kids. If the Wikileaks staff is uncomfortable posting this here, please give us a bat signal somewhere else.

ANSWER: It is curious. So far we dont know what to make of it.

The pizza claims in the emails appear to refer to a fundraiser at a popular pizza joint where powerful people congregate. There seems to some sort of inside joke in the wording of the emails, but the mainstream press has not asked the people involved for full explanations, thereby predictably stoking the fire.