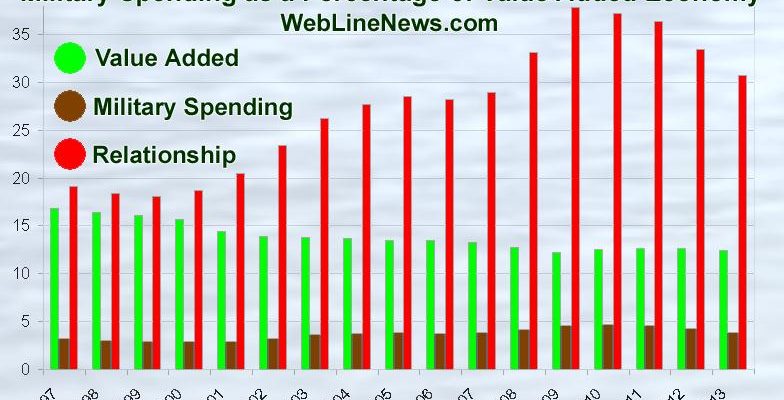 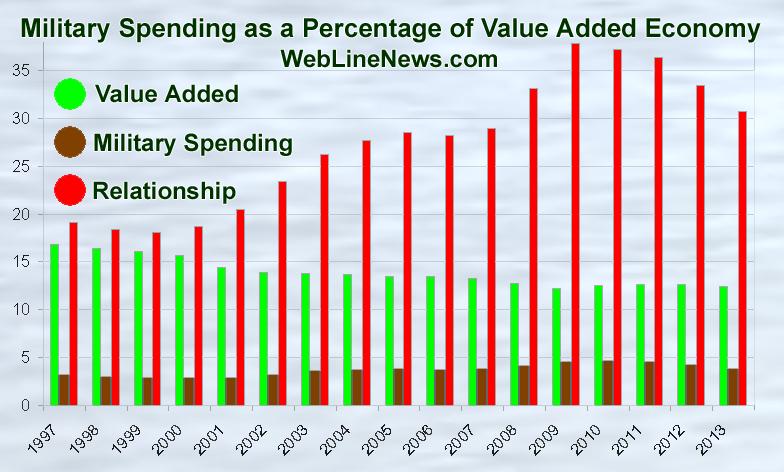 US military spending has often been compared to Gross Domestic Product (GDP). Gross Domestic Product is the total value of goods and services produced in the economy in a year. In fact, GDP does not require that anything actually be produced, rather that transactions take place. Much of GDP (about 87.6%) may be described as overhead of production, services or moving money around.

MILITARY SPENDING AS A PERCENT OF GDP

According to The World Bank, “Value added is the net output of a sector after adding up all outputs and subtracting intermediate inputs. It is calculated without making deductions for depreciation of fabricated assets or depletion and degradation of natural resources.”

VALUE ADDED AS A PERCENT OF GDP

Traditionally, an economy was underpinned by the value or wealth added to society. Without value creation, economic improvement was more difficult. From before 1997 through 2008, value added was on a downward trend. In more recent years, it has steadied out at about 12.4 percent. This trend is shown on the graph by the bluish bars. 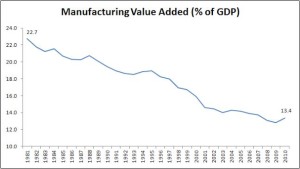 The Economics and Finance Fanatic presented a similar graph with slightly different numbers covering a longer period, with data from 1970 through 2010, right. In 1970, value added was well over 20 percent. Click to enlarge image. The blogger notes:

Very clearly, the long-term trend for industry and manufacturing value added as percent of GDP is declining. In my opinion, this problem needs to be addressed in order to ensure healthier economic growth in the foreseeable future.

Alternatively, the decline in value added compared to GDP may be partially explained by productivity increases, changing to a service economy, ‘outsourcing’ of manufacturing jobs, and the US trade imbalance. Economists may debate these issues, now informed that much more of the manufacturing economy is tilted toward military value, leaving relatively less for everything else. Comments are open below.

US MILITARY SPENDING AS A PERCENT OF VALUE ADDED

From 1997 through 2001, military spending as compared to value added ran at about 20 percent. After 9-11, numbers grew dramatically. The peak in the ratio at about 37.8 percent came in the last budget year of George W. Bush. The ratio has since declined but is still very high compared to historical averages, at about 30.7 percent in 2013. This trend is shown on the graph by the greenish bars.