There is a fancy new minimum wage study circulating on the internet. Minimum wage ideologues are misrepresenting the study in both mainstream media and partisan Republican sites as some grand evidence to prove minimum wages are harmful.

But all the study suggests is that people may cut back slightly on spending at low quality restaurants where minimum wage increases. The report does not say increased minimum wage harms the economy.

First, a look at the new study and what it really means. Second, a run through proper macroeconomic analysis to explain how minimum wage works. Third, graphs to illustrate the concepts.

The 33-page study provides extensive statistical analysis and a generous quantity of charts and graphs. The main concern of the study is that “firms could exit the market altogether.” In other words, when minimum wage increases, restaurants shut down. At first glance, this sounds really bad. Nobody wants companies to go out of business.

Regardless of the “suggestion” that poorly rated restaurants may have slightly higher fail rates, overall jobs increased faster in the most affected area than on average in the state or the nation. If anything, this suggests that higher minimum wages spur growth and jobs as more money circulates throughout the economy, notwithstanding low-rated restaurants.

Bottom line of the study: Poorly rated restaurant owners need to improve quality of their services or risk failure. 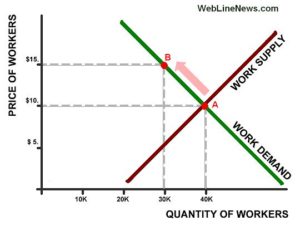 Macroeconomics explains why the point of this study is limited to providing advice for low-rated restaurant owners. When the price of workers increases, the quantity demanded of workers moves up the curve to the left from point A to point B, with fewer workers desired at the higher wage.

Now to Microeconomics for a moment. Often, those who dislike minimum wage laws assume that employers will immediately lay off large numbers of workers when costs rise. This is not true.

When a business becomes unprofitable, the company may shut down. However, a company cannot liquidate immediately. It takes time to sell assets, fulfill or assign lease obligations, and wrap up other loose ends. During this time, the company needs to decide whether to shut down or continue operating.

Note that the cost of shutting down will be a monthly expense and may be rather expensive. Assuming the business started out profitable before the increased minimum wage, increased costs would have to push the company deep into the red to induce immediate shut down.

Therefore, even some of those companies that find themselves losing money will need to operate for some time after the change. During this time, workers earn money and spend that money, stimulating the economy.

Increased minimum wage places pressure on employers to lay off workers. But if they want to get the same job done just as well, they can only fire workers at the outside margins of efficiency. In the short run, businesses will keep more workers than the shift along the demand for workers indicates.

Libertarians and laissez faire capitalists cannot rationally argue otherwise — because they believe in “rational man” who operates business efficiently. Under their own ideology, there is little to no room for job cuts.

Increased minimum wage always brings out inflation fears. Businesses may try to pass along added wage costs to customers. When the costs of inputs increase for a supplier, the company cannot pass the entire cost onto its customers (except in a few extraordinary cases not applicable here). Basic rule: a competitive enterprise does not control the market price. At worst, the increase in cost is split between the company and the customers (based on elasticity of demand).

The good news is that — thanks to the higher minimum wage — consumers have more money to spend right away, and will spend more at local businesses. The net increase in spending power exceeds inflation and spurs job growth. (Note that Marginal Propensity to Consume remains high at minimum wage.)

Before the increase in minimum wage, workers are paid the amount shaded in green, where the price of workers meets the quantity of workers. Price times quantity equals total wage income in the restaurant industry.

After the initial increase in minimum wage, according to the basic theory, the price of workers goes up, while the quantity of workers drops. Still, price times quantity equals total wage income in the restaurant industry. Note that the increase in wages per person may make up for the decrease in workers.

In reality, employers cannot lay off everyone to reach point B right away. Some “surplus” workers remain employed. The lighter green section represents an area where some unknown additional amount of spending money enters the economy.

Despite the small drop for low-rated restaurant firms suggested in the study, the increase in consumer funds shifts the Aggregate Demand Curve to the right, improving the macroeconomy. It makes perfect sense that better funded consumers would prefer to move away from low-rated restaurants. This is the full theory, and real world growth figures above appear to support it.