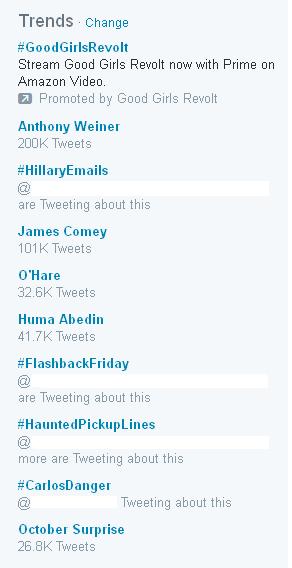 A letter from the Department of Justice (DOJ) and the Federal Bureau of Investigation (FBI) was released today returning the Hillary Clinton email investigation to the agenda. The presidential election is eleven days away, and Hillary Clinton is the poll favorite as this news breaks.

In July, FBI Director James Comey closed an extensive investigation pertaining to the use of a private server by Hillary Clinton where classified information was compromised. Now, the same James Comey writes this letter addressed to various committee chairs:

In my previous congressional testimony, I referred to the fact that the Federal Bureau of Investigation (FBI) had completed its investigation of former Secretary [of State Hillary] Clinton’s personal email server. Due to recent developments. I am writing to supplement my previous testimony.

In connection with an unrelated case, the FBI has learned of the existence of emails that appear to be pertinent to the investigation. I am writing to inform you that the investigation team briefed my on this yesterday, and I agreed that the FBI should take appropriate investigative steps designed to allow investigators to review these emails to determine whether they contain classified information, as well as to assess their importance to our investigation.

Below: Click to see an enlarged version of the full letter below. 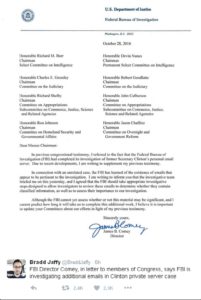 Although the FBI cannot yet assess whether or not this material may be significant, and I cannot predict how long it will take us to complete this additional work, I believe it is important to update your Committees about our efforts in light of my previous testimony.

There are reports that the newly discovered emails were found “on an electronic device shared by Anthony D. Weiner and his estranged wife Huma Abedin.” Anthony Weiner, a former Democratic Congressman, recently got into trouble for sending sex messages and photos to an underage girl. FBI was reviewing his device in the “sexting” investigation.

REACTION BY BOTH CANDIDATES HAS BEEN SWIFT

DONALD TRUMP, the Republican nominee running for president, appeared at a rally, opening with the news.

I need to open with a very critical breaking news announcement. the FBI has just sent a letter to Congress informing them that they have discovered new emails pertaining to the former Secretary of State Hillary Clinton’s investigation.

Crowd starts chanting: “Lock her up.”

And they are re-opening the case into her criminal and illegal conduct that threatens the security of the United States of America. Hillary Clinton’s corruption is on a scale we have never seen before. We must not let her take her criminal scheme into the Oval Office… This is bigger than Watergate…

HILLARY CLINTON rushed to provide a press conference about the announcement, taking questions.

The Director himself has said he doesn’t know whether the emails referenced in his letter are significant or not. I’m confident whatever they are will not reach the conclusion reached in July. Therefore, it’s imperative that the Bureau explain this issue in question whatever it is without any delay…

In the questions, Hillary Clinton said she was not contacted “by anyone.” When asked about trust, she said she thinks people decided “a long time ago about the emails.”