It’s getting mighty close to the election and Twitter is overflowing with top trend #DraftOurDaughters. Memes marked “Paid for by Hillary” are popping up right and left (mostly right however). According to the memes, Hillary Clinton wants to send women to fight a war in Russia.

Whether it is out of resignation that Hillary Clinton is so far ahead of Donald Trump at this late date, or relief now that the presidential election appears pretty much over, or maybe desperation to try to take out Hillary in ways that Project Veritas and WikiLeaks have not been able to do (so far), or most likely — just a viral internet trolling laugh fest.

Update: Right after we posted this, a major development in the Hillary Clinton email scandal occurred. Turns out, this election is not yet over. Read article: Hillary Clinton Email Investigation Returns, Both Candidates Respond In Videos

“Deplorables” are discovering these campaign ads at lightning speed. Some believe the ads are real, some do not. Here are a few. What do you think? (click to enlarge) 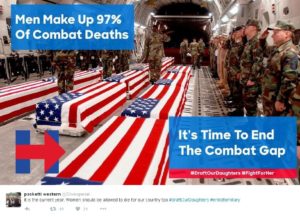 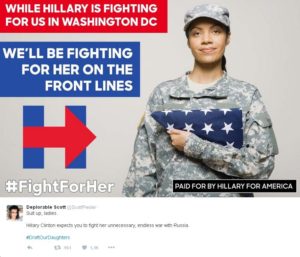 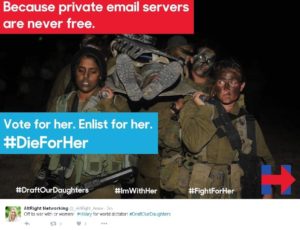 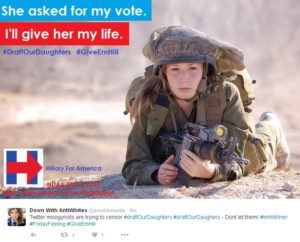 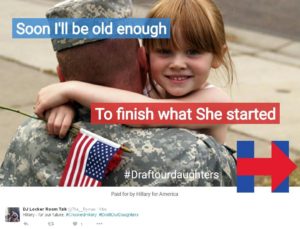 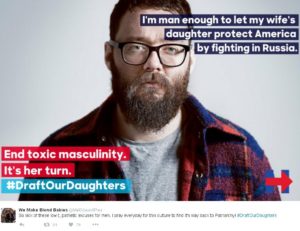 WHO BELIEVES THESE MEMES ARE REAL?

Jay O is not so sure:

#draftOurDaughters is the scariest hashtag I’ve seen. Are these real propaganda ads?

They probably are “real propaganda ads” for some purpose, Jay O, but never mind. You won’t be drafted.

wait the draft age in America is between 18-26, I’ve never been so grateful to be old. Phew.

Trump says naughty things but they are just words. Hillary wants to #DraftOurDaughters. Say no to war! #Drain the Swamp. 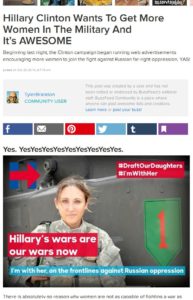 UPDATE: BuzzFeed removed the article, but it still exists here and here.

BuzzFeed writer Tyler Brandon publishes an article finding the #DraftOurDaughters campaign “AWESOME.” Tyler Brandon actually collects a bunch of these memes and issues commentaries. One meme says “Join Hillary to fight Russia with our greatest asset: DIVERSITY.” Tyler Brandon’s commentary: “Heck, I even think most women I know could beat me up.” (left)

We did it ! Buzzfeed thinks #DraftOurDaughters is real! 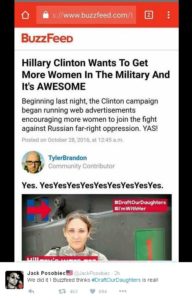 Gloating that they have successfully trolled BuzzFeed, the truth finally comes out in a large way with this tweet confessing the dirty deed (right).

But there is more to the troll than this. Tyler Brandon never posted at BuzzFeed before. This is his first article. A prominent disclaimer appears near the top of the article: “This post was created by a user and has not been vetted or endorsed…” At the bottom of the article, Tyler Brandon says, “Remember to vote November 12th!” The election is November 8.

This all appears fake. Someone tell Jay O please.

But there is some tiny little truth in the whole matter. In a recent article entitled “Hillary Clinton Thinks Women Should Be Included In The Draft,” Hillary Clinton said she would support draft registration for women. She also said:

“I am on record as supporting the all-volunteer military, which I think at this time does serve our country well,” she said. “And I am very committed to supporting and really lifting up the men and women in uniform and their families.”

The article also pointed out that such a measure would be “symbolic” and noted overwhelming support for the big bill that contained it.

But requiring women to register for the draft has become a symbolic measure for many lawmakers, buttressing the argument that there is not an inherent gender component to one’s ability to serve in the military.

The Senate voted 85 to 13 on Tuesday to pass the National Defense Authorization Act, which included the provision requiring women between the ages of 18 and 25 to sign up to serve their country. As HuffPost’s Jennifer Bendery noted, it was a rare demonstration of bipartisan support for such a culturally significant milestone.