In a last minute emergency Order, the Supreme Court again changed the election rules in Arizona, giving the state authority to enforce a new law making it a crime for a person to collect ballots of others and submit them to the state unless that person is a family member, household member, caregiver, or an official like a mail carrier. The Supreme Court Order came down on Saturday, just days before the election. 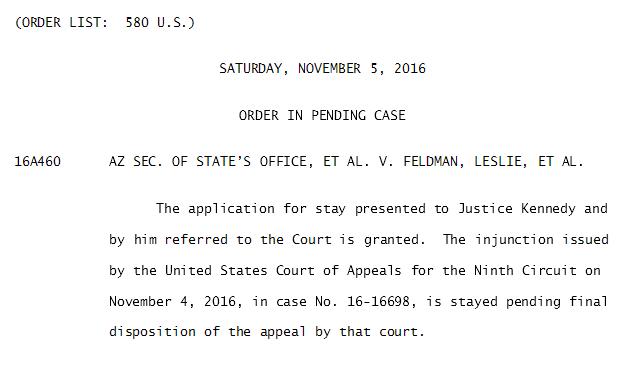 The Saturday November 5, 2016, Order does not provide reasoning for the last minute rule change. Apparently, the Supreme Court Order changing the election was based on a recent rule discouraging courts from changing elections, as detailed below.

The Supreme Court Order came out fast. Just the day before, Friday, November 4, the full Ninth Circuit Court of Appeals issued an Order changing the rule and preventing the state from implementing the new voter restrictions with an injunction. Previously, on Friday, October 28, a panel of the Ninth Circuit Court of Appeals decided 2-1 that the new law may be implemented for the 2016 election, upholding a lower court ruling.

The bill itself, HB 2023, became law after a partisan vote in March of this year. Democrats and voters immediately filed a lawsuit claiming voting rights were violated. As the months went by, the lawsuit wound its way through the courts, ending up with this extraordinary Supreme Court Order just three days before the election.

The new law largely affects Native Americans — especially when considering other obstacles in Arizona. Arizona has closed post offices, required mailed-in ballots, and pushed many Native Americans into a position where they have to hand ballots off to someone to run possibly hundreds of miles to a post office or to a ballot office. Disallowing most people from submitting ballots will suppress their votes.

Many groups banded together to send a public letter to the state. But the state continued to aggressively pursue the law in court.

Court orders affecting elections, especially conflicting orders, can themselves result in voter confusion and consequent incentive to remain away from the polls. As an election draws closer, that risk will increase. (Page 4)

The Purcell case involved voter ID laws and also came from the state of Arizona.

In this case, Feldman v. Arizona, the last decision before the Supreme Court Order compared the Purcell case to the current situation finding, “the factors that animated the Supreme Court’s concern in Purcell are not present.”

1. The new law does not actually affect voter rights or requirements. Rather, those who deliver ballots face felonies. The ballots themselves are still considered valid.

First, the injunction does not affect the state’s election process or machinery. The injunction … would not change the electoral process, it simply would enjoin enforcement of a legislative act that would criminalize the collection, by persons other than the voter, or legitimately cast ballots… The only effect is on third party ballot collectors, whose efforts to collect legitimate ballots will not be criminalized pending our [full] review… [In Purcell voters themselves would be turned away] if they lacked the proper proof of citizenship…

2. The criminalization of ballot delivery is something new and different.

Second, none of the [earlier] cases that caution against federal court involvement in elections involved a statute that newly criminalizes activity associated with voting. This law is unique in that regard.

4. The lawsuit was prompt upon passage of the new law just a few months ago.

Fourth, unlike the circumstances in Purcell and other cases, plaintiffs did not delay in bringing this action…

5. The voter ID law in the Purcell case was cleared by the Justice Department under the Voting Rights Act (VRA); this new law was not. This new law comes after the notorious 5-4 Shelby case which found that “pre-clearance” of state voting restrictions was unconstitutional.

Fifth, Purcell was decided prior to the Supreme Court’s opinion in Shelby Cty, v. Holder … In short, Purcell was decided when the preclearance regime [of the Voting Rights Act] was still intact, and Arizona was a covered jurisdiction… As a result, there was a prima facie reason to believe that the challenged statute was not discriminatory… That same reassurance is absent here…

The new Arizona law is remarkably similar to a prior law that was withdrawn to avoid Voting Rights Act review.

In 2012, Arizona submitted a previous iteration of H.B. 2023 for preclearance. The Department of Justice expressed concern and refused to preclear the bill, S.B. 1412, without more information about its impact on minority voters. Rather than address this concern, Arizona withdrew S.B. 1412 from preclearance and repealed it the following session. Now unhindered by the obstacle of preclearance, Arizona has again enacted this law–a mere seven months before the general election–with nothing standing in its way except this court.

6. The Purcell case was based upon an unexplained “barebones” order. This new case was fully analyzed in detail.

After the Shelby decision eliminating the pre-clearance process, some warned of the dangers lurking in Arizona. For example:

SB 1412, a law that in 2011 made it a felony for a person to deliver more than ten early ballots to a polling place. That bill, also signed into law by Gov. Brewer, was never implemented because the state realized it had little chance of passing through the Voting Rights Act pre-approval process. Ultimately, state lawmakers decided to withdraw the bill from consideration.

ONE FREE ELECTION FOR VOTE SUPPRESSORS

Ian Millhiser, Justice Editor at Think Progress, describes the overturning of the pre-clearance rule in the Voting Rights Act (VRA) as “One Free Election For Vote Suppressors.” Ian Millhiser explains that courts move slowly. When combining the Purcell case refusing to make last-minute changes and the Shelby case no longer permitting pre-clearance with the slow operation of courts generally:

At the very least, vote suppressors will often get one free election when they enact a law making it harder to vote, where the law will go into effect regardless of whether or not it violates the Constitution or federal law.

Ian Millhiser’s report goes on to describe the history of voter suppression in some detail. He predicted this current situation exactly. Jim Crow is back.

We hear all kinds of claims of voter fraud in the media and on the internet. When the pedal hits the medal and those who claim voter fraud is epidemic have to go to courts to prove it, with some of the best and most well-funded attorneys determined to reduce the vote, we find very little to nothing in the cases. They can speak and exaggerate and prop up this or that outrageous example — they just cannot prove it in court. This is most telling.