Ben Garrison is famous for posting unflattering political comics supporting conservative views online. His latest comic, published only hours ago, shows a picture of Hillary Clinton apparently disabled sitting on a stool telling her supporters, “I want you to stand up for America… because I can’t.”

With the ink on his latest popular comic still drying, his home website, GrrrGraphics.com, has been suspended. According to Alexa, the site is in the top 100,000 of all sites in the United States. 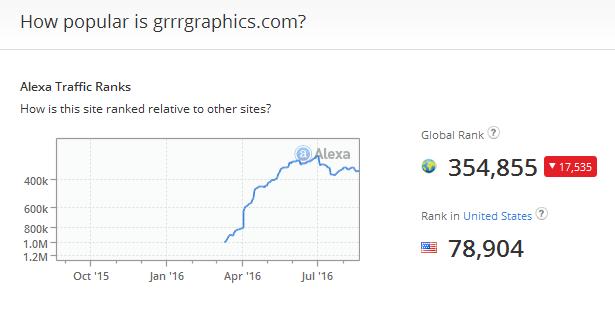 Ben Garrison released a statement at his WordPress blog:

GrrrGraphics.com has been shut down again for the third time! Each time the website was suspended was when a Hillary Clinton cartoon went viral!

On Twitter, Ben Garrison claims that the domain is down for a “third time. Hillary and her operatives hate free speech! We’re working on it.”

Of the 15 replies showing up under the Tweet at press time, all are supportive.

UPDATE: The site was restored by the host company about 12 hours later. Ben Garrison claimed:

Finally, just before midnight, their tech people sent us an email claiming we were overusing bandwidth and hurting other customers on the server. In other words, it’s our fault because we were becoming more successful. They knew they were the ones who shut us down, but they refused to come clean and admit it. No…they’d rather see us stew in darkness for half a day.

Instead of warning us or telling us we could go to a VPN or larger server for which we would have gladly paid extra, they shut us down with the alarming message, “User Suspended.” This made us look like criminals.