NBC News released a story today to expose the fact that “Nearly 70% Of Ad Dollars in 2016 Race Come From Outside Groups.” In the aftermath of the 2010 Citizens United 5-4 Supreme Court ruling and related court decisions, outside groups are literally taking over funding elections from the parties. We checked the NBC math and it seems correct.

NBC minimizes this takeover by promoting a short video entitled “Why Super PAC’s May Not Be As Powerful as They Seem.” In the video, we are treated to a phone-quality announcer, backed up with a slick video. The announcer is Bruce Mentzer, who runs a business that specializes in “GOP Political and Issue Media Placement.” Here is his casual-sounding commentary:

We’re the liaison between the campaign or the super PAC and the media outlet. We’re starting to realize the importance of the hard dollars that the campaign raises because the hard dollars buy more media than the super PAC dollars. The campaign, the official campaign, qualifies for these low rates. Anyone outside of the campaign — the — if it’s an independent expenditure or if it’s a super PAC advertising, they do not qualify for lowest unit rates. They basically are buying at market. And the station at their own discretion can charge honestly whatever they want to charge.

We used to see back in 2008, 2009, 2010, that issue were charged generally 30 to 40 percent more, but what we’ve seen in 2015, the precursor to what’s obviously gonna happen in 2016 — the stations are basically charging astronomical rates. We found that example in Iowa that was I think almost 900 percent increase between the Rubio campaign and the Walker super PAC in that one spot.

And then in our own research we did something in New Hampshire and I think there was about a 230 percent difference. So, it’s all over the board. You know we, we’re, we live in a capitalist society and this is capitalism and they have realized that there’s a lot of money out there — there’s a lot of super PAC money out there. The super PAC’s are going to be able to afford these spots, and they want these posts even though a super PAC can have 50 million dollars — if the campaign has 10 million dollars, the campaign can probably buy as much advertising as the super PAC with 50 million dollars.

NBC has relied upon this video repeatedly as the network source to convince the audience that Super PAC’s are not very important. However, the commentary by this ad buyer who specializes in helping Republicans win elections does not provide any actual study. It is merely a series of anecdotes that we are supposed to take at face value. If these stories are representative, a major company like NBC is in a far better position to run a full-scale study of what are its own practices than this one buyer.  NBC needs to release its inside information on this subject if NBC would like to make this point. Why not?

NBC GRAPH IS A GROSS DISTORTION OF REALITY

The original sized graph from the NBC website shows two circles. The Republican circle is about 410 pixels in diameter. The Democratic circle is about 352 pixels. Here is some math. Area of a circle is ¶r².

The area of the circle of the Republican graph is about 414770 pixels.

The area of the circle of the Democratic graph is about 305721 pixels.

Then, there are the actual numbers. The numbers are ridiculously small and hard to read, but it looks like 123,688,268 was spent by Republicans and 25,231,244 was spent by Democrats. Converting to a percentage, Republicans spent 83 percent while Democrats spent 17 percent. Republicans spend far and away more than Democrats and the picture distorts that grossly.

Here is a better graphic to describe the situation. 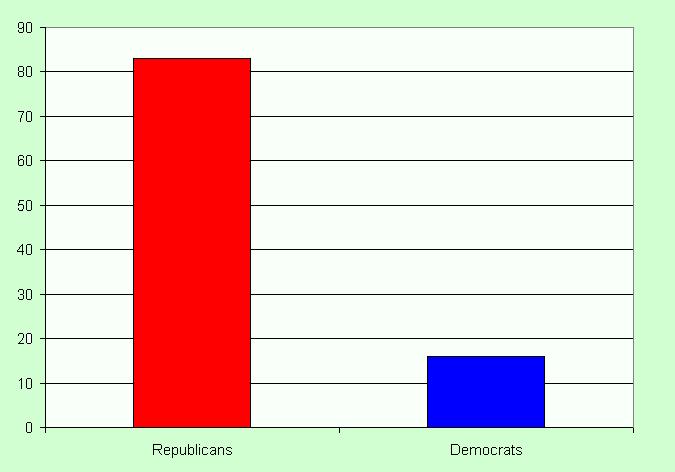 No wonder the numbers were hard to read.

To review, NBC claims that Super PAC money is not as effective as some think. NBC relies on a few anecdotal stories. Those stories come from a GOP guy. NBC has some of the best internal information but refuses to use that.The attempted effect of this NBC propaganda is to minimize how important Super PAC money is. Minimizing its importance could slow down actions to change the Citizens United rule.

Then, NBC fails to display the difference between Republican versus Democratic spending except in tiny, hard-to-read numbers. Rather, NBC produces a graphic that is grossly distorted.

Conclusion: NBC takes positions on both of these issues most favorable to Republicans.