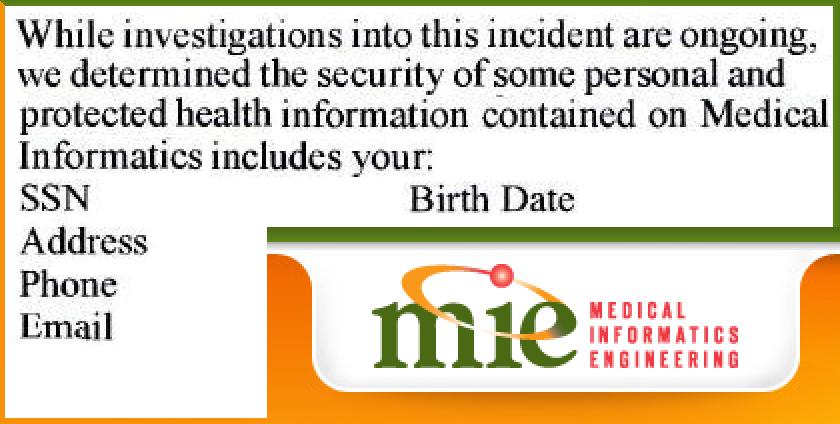 MIE is Medical Informatics Engineering, an Indiana company that has been handling sensitive medical data online since 1995. The company provides services nationwide. Patients are affected by this breach everywhere, even if they have never heard of this company. A July 17, 2015, letter was released to health consumers. The letter states, “The affected information includes your: SSN Birth Date Address Phone Email” and “the security of some protected health information.” The letter does not say how many patients have been affected.

According to a report at Department of Homeland Security, “Data of 4 million patients lost in MIE hacking. The Indiana Attorney General announced that an estimated 1.5 million State residents and 3.9 million individuals from 11 healthcare providers and 44 radiology clinics nationwide may have been impacted.” (Emphasis in original)

Patients are consoled in the MIE company letter with promises of internal and other investigations, and a free subscription to an Experian credit protection service.

Meanwhile, a class action lawsuit has been filed. According to the law firm website, “Cohen & Malad, LLP filed a class action lawsuit on behalf of more than 3.9 million consumers whose medical information was stored by Medical Information Engineering (MIE), a medical software company that contracts with numerous healthcare facilities across the United States.”