Update August 22, 2016: The meeting of the commissioners on Monday as a result of the #StartCounting campaign yielded a 9-0 vote of the board to order counting of the petition signatures.

As the late September deadline to gain access to the 2016 election ballot looms closer, a petition for referendum with 127,000 signatures languishes in Miami-Dade County, Florida. The referendum involves a Citizens United inspired campaign funding reform. A bipartisan group and a union sponsor the drive.

Laws require counties to act upon referendum petitions with the signatures of four percent of the voters. This petition has more than double that required number.

The elections supervisor will not start counting the signatures. The mayor’s office will not order the counting. The Board of County Commissioners has the duty to order the count, but the board is in summer recess. A special meeting is scheduled for Monday. Meanwhile, a lawsuit has been filed to demand the count.

To press the county to begin reviewing the petitions, the #StartCounting hashtag has been launched on social media sites.

The petition is sponsored by An Accountable Miami-Dade, a bipartisan group attempting to reduce money in politics:

An Accountable Miami Dade came together under the bipartisan leadership of Monica Russo President of SEIU Florida Counci[l] and Bettina Rodriguez Aguilera, Republican former Vice Mayor of Doral and former Florida President of League of United Latin American Citizens (LULAC). Russo and Aguilera will serve as Co-Chairs of the PAC.

@GeniusOfDespair published this image of the referendum proposal: 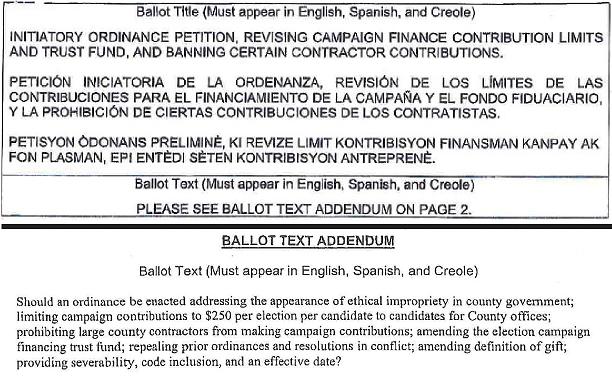 On August 2, 2016, the 127,000 signatures were presented to the Supervisor of Elections. Counting has not started. State law requires action upon the referendum petition within 30 days. The deadline to gain access to the November 2016 ballot is in September. The “election clock” is running, but there are delays at every official level.

ELECTIONS SUPERVISOR WILL NOT #StartCounting

According to the The New Times, a request was made under Florida’s “sunshine laws” to obtain information from the county involving the referendum. The request asked for various county communications “between August 1 – August 9 regarding a petition for campaign finance reform.” The county responded:

Your public records request will require 150 searches which will take 300 hours to complete at the rate of ITD personnel, $72 per hour, for a total cost of $21,600.

MAYOR GIMENEZ WILL NOT ORDER A COUNT

Miami-Dade Mayor Carlos Gimenez claims that he does not have the authority to order the elections supervisor to start counting, even though the mayor appointed her.

In 2011, Republican Carlos Gimenez became mayor in a special election by a slim margin after a billionaire-funded recall ousted Republican Mayor Carlos Alverez for supporting an unpopular tax increase in the first-ever successful county recall. In 2012, he won a regular election with 54 percent.

Mayor Carlos Gimenez’s reelection effort has received about 52 cents of every dollar raised in all eight races, and his $3.3 million tally promises to make this the most expensive election cycle in the history of Miami-Dade politics.

While a poll last spring found Carlos Gimenez carrying a wide lead with “soft” support, The Miami Herald just declared the 2016 race to be the “ultimate test” for him. The same article said his campaign funding is now over four million dollars.

Another poll shows that Carlos Gimenez will hurt his re-election chances by stalling or blocking the referendum:

An overwhelming, bipartisan majority of Miami-Dade voters agree that the Supervisor of Elections should start and complete counting the over 127,000 petition signatures submitted by An Accountable Miami-Dade to ensure the citizen-driven initiative is on the November ballot, and a full 51 percent are less likely to vote for Mayor Carlos Gimenez knowing that he refused to order the petition count to begin, according to a new survey released by An Accountable Miami-Dade. The survey makes clear that voters will hold their elected officials accountable for their inaction at the ballot box. (bold added)

A county attorney has issued a legal opinion stating that the mayor “does not have the authority” to order the count under the county charter. 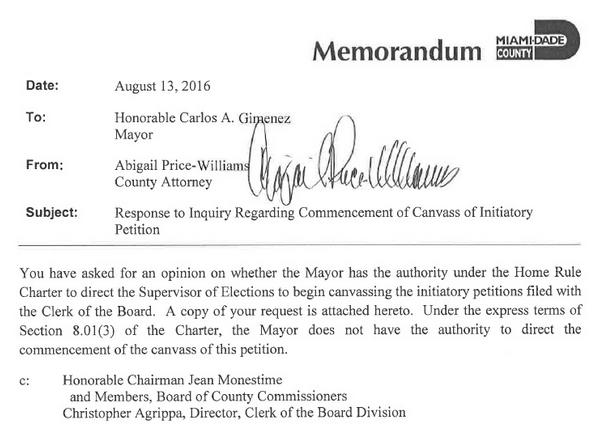 The referendum process is governed by Article 8 of the Miami-Dade County Home Rule Amendment and Charter [PDF]. Under the law:

The signed petition shall be filed with the Board [of County Commissioners] which shall within 30 days order a canvass of the signatures thereon to determine the sufficiency of the signatures… If the Board does not adopt or repeal the ordinance as provided above, then the proposal shall be placed on the ballot without further action of the Board.

But the Board of County Commissioners is on summer recess. The mayor may transact certain Board business during recess under the law:

During the Board’s annual summer recess period, as determined by the County Calendar approved by the Board, the County Mayor or County Mayor’s designee shall administer County business requiring approval of the Board, including the award of contracts and approval of change orders required to maintain essential health and safety activities pursuant to approved County procedures; application for grants; execution of grant agreements, related memoranda of understanding, and other intergovernmental cooperation agreements; application and execution of grants and agreements; receipt and expenditure of funds under the American Recovery and Reinvestment Act of 2009 and authorization to perform any and all requirements of said Act; and receipt and expenditure of other funds which will be put in jeopardy, if not received and expended during the summer recess period. All summer recess items not otherwise excepted from committee review will be scheduled for the appropriate committee of jurisdiction and will be placed on the Board’s agenda for ratification at the first regular meeting in the month of October.

From the above, it does not appear that the mayor can in fact order the count. A simple matter of rubber-stamping the count has become a major political football.

BOARD OF COUNTY COMMISSIONERS

The Board of County Commissioners is on summer recess. An August 9 special meeting of the board was “canceled due to the lack of a quorum.” One county commissioner suddenly canceled last minute.

A second try at a special meeting has now been scheduled for Monday, August 22. As it stands now, seven county commissioners say they will be there for the meeting. They have not all committed to order the count. All the board has to do is show up and order the count.

SEIU Florida announced on its Facebook page (archive link) a lawsuit to “ensure” that the elections supervisor #StartCounting:

“Over the past two weeks, the County has erected a bureaucratic barricade to obstruct the will of hundreds of thousands of Miami-Dade County residents, we are therefore resolute with respect to pressing forward with our lawsuit to ensure that the Supervisor is forced to start counting!” Service Employees International Union Florida President and campaign co-chair Monica Russo said.

The organization An Accountable Miami-Dade will not withdraw the lawsuit until counting begins.

In the meantime, the will of the people to speak and initiate democratic action through the petition and referendum process is being delayed by the bureaucracy — all for the sake of extra speech time to the wealthy.