Stepping back from the partisan noise, there are 10 Reasons the Email Server Scandal is Pure Bunk. Also, the Clinton Foundation Scandal is Dangerous Hypocrisy. Both scandals are covered on this page.

Hillary Clinton made a mistake and mixed her personal emails with official government emails on a private server. Then, when partisan Republicans in Congress wanted her to release all her personal emails, some of the emails were deleted. 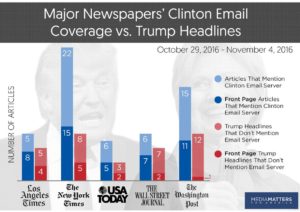 This has been the overriding topic of conversation in the last days before the election. Let’s look at this in perspective.

1. There is too much classification in government. With hundreds of thousands of documents classified per day, it is hard to take seriously a few documents marked as such, or as FBI Director James Comey might say, that should be known as such. Just because Hillary Clinton had a few classified items on her devices does not mean that they should have been classified or that they should be kept secret.

2. Prosecuting Hillary Clinton condones opaque government. The “crime” Hillary committed was not to properly secure classified information. This view implies support for the national security state. We cannot later turn around and say that we want transparent government or that we don’t trust the government. Instead, we wind up supporting the establishment that we claim to oppose.

This is especially true with a mere technical violation. Unless someone can show that authentic hacking occurred and that real harm was done, Hillary deserves nothing more than a speeding ticket — 63 in a 55 zone.

3. Nobody can seriously say that properly classified servers are safe. Computers are hacked everywhere — including in the government where the premiere intelligence gathering organization, National Security Agency (NSA), has been hacked.

4. The investigation calls for releasing the documents. Oh, the irony here. Republicans in Congress want to see the classified documents from the White House while claiming secrecy is so important. More likely, they just want to take political advantage of access to Hillary Clinton’s personal conversations.

5. The email “scandal” is purely partisan. If Republicans in Congress were not parading the Benghazi tragedy for yet another investigation, there would be no “email scandal.” This email issue came to light as a result of this defunct and discredited investigation — sort of like the Bill Clinton impeachment was the last remaining claim in a sea of alleged scandals that were also discredited.

6. The email “scandal” is not important. Even if the worst allegations against Hillary Clinton were true, it amounts to very little in the scheme of things. A person hides personal information from those trying to discredit her then she does not tell the truth about it. So what. It’s like the Bill Clinton tryst that led to the impeachment — fully expected and completely understandable. It is no accident that the “I” word has been hitting the talk circuit: it is pure power politics. The pied piper.

7. Relevant issues to the people are lost in the noise. While pundits and partisans pontificate upon the “Constitutional crisis” that would come from an indictment of Hillary Clinton, and while they build baseless wild speculation about pardons for Hillary Clinton, the real world is practically on fire. Anything even remotely resembling issues is lost in the last days before the election. There are real substantive policy differences between the candidates. Let’s remember those.

8. The real Constitutional crisis is at the Supreme Court. In an unprecedented partisan power grab, Republicans have blocked a proper nominee from Senate consideration, claiming that nominees should not be considered in an election year. Now, with a Hillary Clinton victory seeming likely, some are saying that no seats will be filled for her entire term. Republicans controlled the Supreme Court from 1970 through 2015. To avoid the Constitutional process that would finally shift the balance of the court, all rules are out the window.

9. Donald Trump is not likely some kind of Republican insurgency. Lately, when people are sick and tired of both parties, Republicans put out an unknown quantity so they can sell the reformed party to enough of the very people who would reject the establishment to get that same establishment back in. The insurgent candidate is very seductive — it feels good to vote against the establishment.

Only six years ago, there was a Republican insurgency called The Tea Party. Those people were supposed to “take over” the Republican Party and bring resistance to government. It did not happen then. It won’t happen now. Even where Donald Trump may be a legitimate alternative, his power would exist mostly within that small area where his ideas intersect Republican ideas. That is not making change.

10. Hillary Clinton gained practically nothing from the server. Crimes generally require some harm or benefit. The only benefit Hillary Clinton got out of this whole situation was — one less device to carry. Not a big deal.

The Clinton Foundation situation is another partisan political scandal. The argument goes that The Clinton Foundation takes donations from people with government business or in foreign countries. The recipients then use government power to do favors for the donors. Worse yet, they use the money for things other than charity. This, of course, is “corrupt” and may even be “illegal.”

Aside from the obvious problem that Republicans pass huge sums of political money around (often without transparency), the basic problem with this “scandal” is the end result.

The Republican plan was to further deregulate the corporate speech industry with the Wisconsin “John Doe” case, but history had another thing in mind: They lost their majority on the Supreme Court.

By discrediting Hillary Clinton and using the foundation scandal to take power back, Republicans would assure their Supreme Court majority and continue to extend this Constitutional contortion that the First Amendment protects unlimited political funding against actual free speech.

Once that takes place, nobody is going to need a charity or foundation to do exactly the kinds of things involved here. They will be able to use unlimited corporate speech rights instead. So, while Hillary Clinton sits there in prison, the very things she did become protected Constitutional rights.