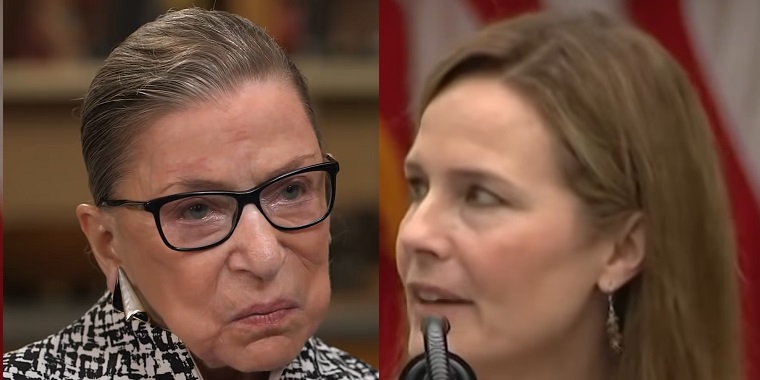 It all fits together. First part: Republicans play confirmation games for political and policy reasons. Donald Trump appears to be on his way out, but Republicans like rulings from a Republican Supreme Court. They want to keep and grow partisan Supreme Court power. Second part: Therefore, Republicans violate both precedent and the United States Constitution to fill the seat.

Donald Trump is expected to lose the election. Democrats are running on a very progressive agenda. Presently, a 5-4 partisan Republican Supreme Court slows and reverses American policies, with 37 purely partisan decisions in the past three years. A 6-3 Court will grind any progressive agenda to a halt.

DONALD TRUMP IS EXPECTED TO LOSE THE ELECTION

Republicans rush to confirm a sixth Republican from the Federalist Society dream list before the election because Donald Trump is very unpopular:

The next two years promise a progressive agenda like not seen since Lyndon Johnson’s Great Society more than half a century ago. The Democratic agenda is waiting in the Senate with many bills passed:

Not a few. Not dozens. We’re talking hundreds. Hundreds of bills that received (at least some) bipartisan support that would improve the health, welfare, and economics of everyday Americans. All dead. And McConnell has no qualms about it.

If Democrats take the White House and the Senate, most or all of these bills will be passed again, and this time signed into laws (although it may take until 2023 after Democrats win more Senate seats when Democrats will gain seats due to a favorable map). A 6-3 Republican majority Supreme Court would slash and cancel as much of the agenda as they could, while turning back previous gains as done in 5-4 opinions eliminating campaign regulations and cutting voting rights. This is why Merrick Garland was denied with consent — in a word, policy.

More than a year after Merrick Garland was blocked, the Senate confirmed Donald Trump nominee Neil Gorsuch to the Supreme Court. Over the next three years the Supreme Court issued 37 purely partisan decisions with Neil Gorsuch casting a deciding vote affecting every aspect of society. Example:

Neil Gorsuch gives lip service to law over policy. In a critical 5-4 partisan case using a 1925 law to force each American worker into individual privatized arbitration when the company violates federal law, Gorsuch cites a “liberal federal policy favoring arbitration.” But the original Supreme Court case in 1953 said the opposite — that arbitration cannot be forced upon workers when federal law is broken. Gorsuch calls that case a “temporary exception since overruled.”
Dissenting, Ruth Bader Ginsburg notes that the Supreme Court itself created the “liberal policy favoring arbitration” in 1983.
The specific 1953 issue concerning companies violating workers rights against federal law was not directly overturned until 2018 when Gorsuch overturned it with “policy” then he accused the dissent of doing policy: “the dissent retreats to policy arguments.”

During those same three years, Ruth Bader Ginsburg cast a deciding 5-4 vote with the majority in 19 cases. She cast deciding votes for issues including upholding abortion, protecting DACA, protecting Native American sovereignty, preserving cell phone privacy, preventing unjustified changes in the Census, etc. Most of those cases did not go the way Republicans wanted, so replacing Ginsburg with an ideological Republican would tighten up the agenda.

The agenda is to delay and revert change — in other words, the main definition of the word “conservative.” A 6-3 Court will have more power to block progress — potentially another 19 cases flipped over the next three years.

BREAKING PRECEDENT AND THE CONSTITUTION

In 2016, Republicans broke precedents and the Constitution. Now in 2020, Republicans reverse their own 2016 false precedent plus they break more historic precedent.

2016: HOLDING A SEAT OPEN TO KEEP THE MAJORITY

In March of 2016, Barack Obama nominated Merrick Garland to replace Antonin Scalia who died suddenly. Republican Senate Majority Leader Mitch McConnell blocked the nomination with a new “rule” of giving the people a “voice.” Republicans took his rule back almost as soon as he fabricated it, promising first to hold the seat open for an entire term of Hillary Clinton then to fill a vacancy in 2020 once Donald Trump took office.

The Senate filled the vacant seat with Donald Trump nominee Neil Gorsuch more than a year later by breaking the filibuster on a near partisan 54-45 Senate vote. Cynically, Republicans blamed Democrats for ending the filibuster on lower court nominations even though Republicans blocked those seats in a policy of total obstruction. Those seats eventually went to Donald Trump too.

See Only Six Empty Supreme Court Seats Were Not Filled by the Sitting President for complete details on the seats.

The Constitution states the president “by and with the Advice and Consent of the Senate, shall appoint … Judges of the supreme Court … ” Barack Obama nominated the individual Merrick Garland “with the Advice” of the Senate. He did his part. Senate Majority Leader Mitch McConnell blocked all activity on the nomination, leaving the nominee and the seat entirely without consent. Consent does not mean that a particular nominee must be confirmed or even that there be a vote — it means that the individual be considered. The Constitution says ‘with consent,’ not ‘without consent.’ But there is no enforcement mechanism for the Constitution.

2018: RUSHING A SEAT CHANGE BEFORE THE ELECTION

In 2018, Anthony Kennedy decided to retire not long before the midterm elections. Donald Trump nominated Brett Kavanaugh, a known partisan operative involved in the impeachment of Bill Clinton. Kavanaugh had used stolen Democratic emails to game judicial nominations under George W. Bush and committed perjury in Senate hearings. Kennedy’s family turned out to be longtime associates with the Trump family.

During the Brett Kavanaugh hearings, allegations of attempted rape and other illegal sexual acts came out, but such allegations were given little consideration. The first woman who alleged wrongdoing was given time to testify. No other witnesses were called, and the vote was rushed. Accuser Dr. Christine Blasey Ford was hung out to dry while Kavanaugh threatened revenge. Brett Kavanaugh was confirmed with the lowest level of support ever, a 50-48 vote.

Throughout American history, vacancies occurring in election years by June 10 under popularly elected presidents were filled before the next election — but not later vacancies, even under popular presidents. Examples:

The real “rule” is: Republicans use raw power to pack the Supreme Court any way they can. A 6-3 Republican Court will last as long as Republicans can hold it — with carefully timed strategic retirements, indefinitely.