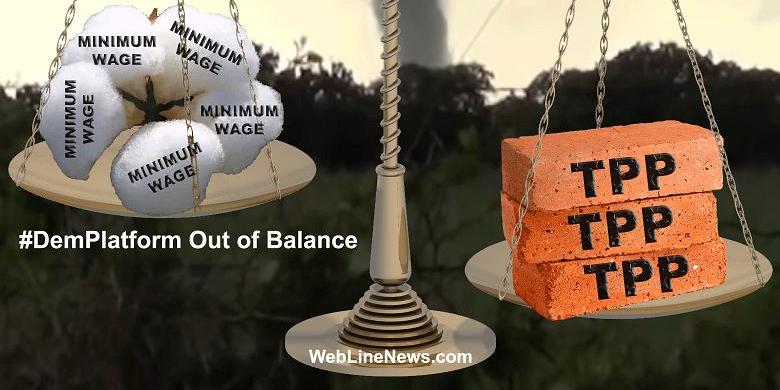 The Fight For 15 movement has been working to secure a higher minimum wage — something closer to a living wage — in the United States for years. This weekend, thanks to the unexpected popularity of independent Bernie Sanders in the Democratic primaries, the party accepted a platform with a $15 minimum wage. Not only that, but the wage will be indexed to inflation to help assure that purchasing power remains intact in the future.

Even though the top two candidates — Hillary Clinton and Bernie Sanders — apparently both oppose the Trans-Pacific Partnership (TPP), the platform committee voted to support it, albeit with a few conditions.

Yesterday, CNN published an article entitled “In platform fight, Sanders loses on trade but wins on minimum wage.” From the article:

By keeping specific opposition to the Trans-Pacific Partnership out of the platform, Democrats avoided embarrassing President Barack Obama, whose administration has spent most of his two terms negotiating the massive 12-nation trade deal.

That’s right. Dropping any TPP support from the platform would embarrass Barack Obama and hurt his feelings. CNN failed to note the overwhelming objections by groups across the political spectrum. See our Tweets from last year using the hashtag #WhosAgainstTPP. CNN also failed to note that opposition to the TPP is a major contributor to the support of Republican candidate Donald Trump. TPP in the platform would net votes to Donald Trump. But most importantly, CNN did not consider the obvious question:

What happens if both minimum wage is increased and the TPP becomes the law of the land?

From the advocacy group Stop The TPP:

TPP – just like most other U.S. trade agreements – would provide significant incentives to multinational corporations to off-shore even more investment and jobs to countries that pay poverty level wages or engage in forced labor.

To answer the question, if TPP becomes law and jobs are lost, minimum wage will be blamed. Vast amounts of propaganda blaming job losses upon higher wages will proliferate the internet, and tremendous political pressure will be released to either rollback the wage gains or avoid the increases. “Third way” Democrats like Hillary Clinton would be the first to concede to the popular “economics” — especially since Hillary Clinton was one of the last Democrats to come along and support the minimum wage increase.

Of course, the TPP issue could become moot if Barack Obama decides to support it after the election in the lame-duck session, as some have suggested. That would leave Hillary Clinton off the hook. But where would that leave the promise of a higher minimum wage?