With the new P-word leak coming out, Republicans running for the United States Senate are under pressure to take a stand on Donald Trump. In the past few days, there has been a rush to change positions at the last minute. Many are suddenly calling for Donald Trump to drop out.

This report will look at the views of every candidate for Senate. Here are two maps. The first one shows their current stances. The second one shows their prior stances. Green is support for Donald Trump. Red is opposition. Yellow is hedging — those who refuse to take a solid stand. 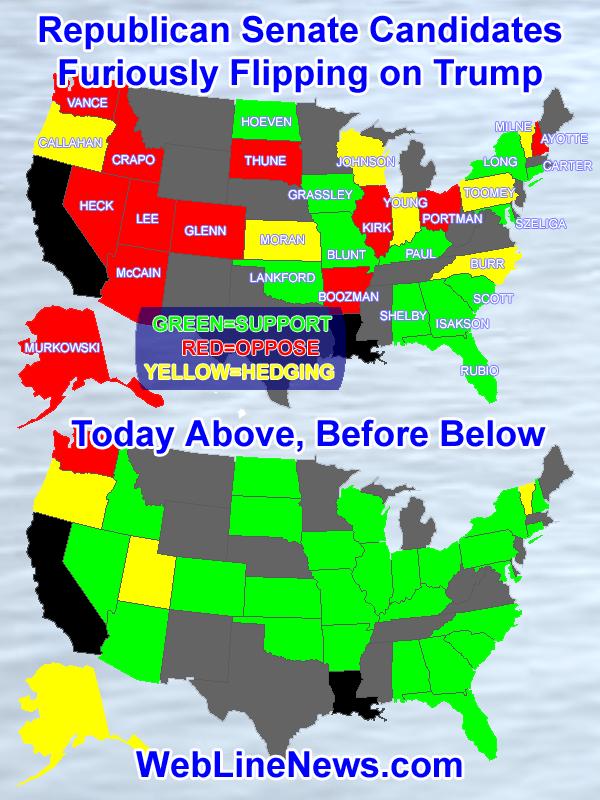 Donald Trump himself said he will not drop out for some ten-year old “locker room banter.” Here is how it shakes out.

In California, thanks to its “jungle primary” system, there is a 2016 contest with no Republican running. In Louisiana, candidates have not yet been selected. In Hawaii, there is no answer yet.

By the time this leak happened, Donald Trump was quite well known. It is hard to imagine that invocation of the word “pussy” could make such drastic changes this late in the game, but it has. Many of those who are hedging happen to be in tight races.

There is a certain amount of judgment in these calls, as many candidates are frankly — not very frank. For example, threatening to punch Trump in the teeth would indicate opposition, while calling his remarks “disgusting” would not be considered a change of the prior view. Here they are:

ROY BLUNT is trailing in his run for re-election as the Senator from Missouri against Jason Kander. He remains supportive of Donald Trump. He wants the presidential candidate to “make people believe he’s sorry,” but more importantly, he opposes a “third Obama term as an unacceptable alternative.”

MARCO RUBIO is comfortably ahead in his contest for re-election as the Senator from Florida against Patrick Murphy, but it is not a sure thing. Fairly quickly after the leak, Marco Rubio described the words as “vulgar egregious & impossible to justify.” Previously, Marco Rubio endorsed Donald Trump. Three days later, the endorsement apparently still stands.

RAND PAUL is solidly ahead in Kentucky to keep his Senate seat against challenger Jim Gray. Rand Paul found Donald Trump’s leak comments “offensive and unacceptable,” but he did not withdraw support.

CHUCK GRASSLEY is running to hold his Senate seat for Iowa in a fairly easy race against challenger Patty Judge. As a Donald Trump supporter, Chuck Grassley has been avoiding the leak issue. His latest comments have been supportive of Donald Trump but he will not say the name.

A BLOCK OF THREE incumbents from contiguous southern states — all big favorites to win re-election — support Donald Trump through it all.

JAMES LANKFORD is running for re-election as Senator from Oklahoma against weak challenger Mike Workman in a blowout race. Despite calling the leak comments “disgusting,” James Lankford and most Oklahoma Republicans have not withdrawn support. James Lankford liked the Mike Pence choice for vice president.

DAN CARTER is challenging Richard Blumenthal in a long shot to take the Senate seat from Connecticut. Dan Carter is concerned that Donald Trump’s leak comments indicate a “notion that women are objects to be conquered.” But Dan Carter also describes the presidential candidates as “bad and worse,” and previously supported Donald Trump.

WENDY LONG is running in a token challenge to incumbent Chuck Schumer for Senator from New York. As of now, she still supports the “Women for Trump” group.

KATHY SZELIGA is also running in a difficult contest to unseat Chris Van Hollen as Senator from Maryland. Kathy Szeliga maintains her support after she described the leak as “appalling.”

JOHN HOEVEN is ready to slaughter challenger Eliot Glassheim for another term as Senator from North Dakota. John Hoeven said, “Donald Trump’s comments were offensive and wrong. He not only needs to apologize, he needs to show through his words and actions that he does not believe in the views expressed in the video.”

JOHN McCAIN is running with a wide margin to maintain his Senator seat from Arizona against Anne Kirkpatrick. Finding “no excuses for Donald Trump’s offensive and demeaning comments in the just released video,” John McCain has pulled his support for Donald Trump.

JOE HECK is running for an open seat in the Senate representing Nevada against Catherine Cortez-Masto. The race has been close, but Joe Heck is slightly ahead. “I cannot in good conscience continue to support Donald Trump nor can I vote for Hillary Clinton,” he said.

KELLY AYOTTE is running for Senate re-election from New Hampshire in a tight race against Maggie Hasson. The leak has changed her mind on supporting Donald Trump. She “cannot and will not support a candidate … who brags about degrading and assaulting women.” She will write in Mike Pence.

LISA MURKOWSKI is the incumbent Senator from Alaska leading challengers in a three-way race by a comfortable margin. Lisa Murkowski ends her hedge and calls for Donald Trump to “step aside.”

ROB PORTMAN is solidly ahead in his race to maintain the Senator seat from Ohio against Ted Strickland. He has turned away from Donald Trump, issuing a statement: “While I continue to respect those who still support Donald Trump, I can no longer support him. I continue to believe our country cannot afford a Hillary Clinton presidency. I will be voting for Mike Pence for President.”

MARK KIRK is the incumbent Senator from Illinois running against challenger Tammy Duckworth. Mark Kirk has the unfortunate distinction of being the incumbent most likely to lose his a seat in 2016. He is calling for Donald Trump to “drop out.”

JOHN BOOZMAN is well ahead running to hold his Senate seat from Arkansas against challenger Conner Eldridge. John Boozman reacted to the leak by saying, “If I never heard anyone speak this way about [my relatives], they would be shopping for a new set of teeth … I am focused on saving the Senate.” This is plain opposition after earlier support.

CHRIS VANCE is running as challenger for Senator from Washington against incumbent Patty Murray who is comfortably ahead. Chris Vance opposed Donald Trump months ago. He now adds that Republicans “believed that character matters and such misconduct disqualifies one from holding the nation’s highest office.”

MIKE LEE is running for re-election as Senator from Utah against Misty Snow. His lead is overwhelming and there is heavy opposition against Donald Trump in the state. He asks Donald Trump to “step aside” so that someone can run to “defeat Hillary Clinton.”

MIKE CRAPO is running for re-election as Senator from Idaho against Jerry Sturgill in an easy-win race. Mike Crapo withdraws support for being “disrespectful, profane and demeaning.” He calls for Donald Trump to “step aside.”

JOHN THUNE is running for re-election as Senator from South Dakota against Jay Williams. Last election, John Thune ran unopposed. This is the most lopsided 2016 Senate election race. “Donald Trump should withdraw,” John Thune flipped before anyone else, recommending Mike Pence to replace him.

States with Senate candidates who appear to be hedging upon supporting or opposing Donald Trump are colored in yellow.

By default, it makes sense to assume that those who supported Donald Trump as a candidate in the past but have not specifically withdrawn support are considered supporters still. But there is a bit of judgment here. Some of the statements are far enough away from support to change state colors from green to yellow. The line was drawn between Marco Rubio whose condemnation was mild enough to keep him on the supporter side and Ron Johnson whose condemnation was strong enough to push him over to the uncertain side. Colors will be updated as positions become clear.

PAT TOOMEY is the incumbent Senator for swing state Pennsylvania against Katie McGinty. He is slightly ahead in the 2016 Senate race. He described comments in the leak as “outrageous and unacceptable.” Pat Toomey has never been very warm to Donald Trump, and the leak has not changed anything so far.

RICHARD BURR is running in a tight race for Senate re-election in swing-state North Carolina against Deborah Ross. He called the comments “inappropriate and completely unacceptable.” He will wait to decide on the ultimate question until he sees Donald Trump’s “level of contrition.”

TODD YOUNG is a federal representative running for an open seat to become Senator from Indiana in a very close race against former Senator Evan Bayh. As of last night, he called the comments “terrible … offensive and inappropriate,” but stopped short of taking a stand: “I’m not sure yet.”

RON JOHNSON is the incumbent Senator from Wisconsin. In a rematch of 2010, he is facing deposed Senator Russ Feingold who is the favorite to win. So far, Ron Johnson has ignored the issue entirely, not mentioning the leak — not even mentioning Donald Trump.

MARK CALLAHAN is running for Senator from Oregon against incumbent Ron Wyden in as a clear underdog. He has not supported or opposed Donald Trump to date.

JERRY MORAN is running for a second Senate term from Kansas, nicely ahead of challenger Patrick Weisner. Previously, Jerry Moran supported Donald Trump weakly; but as of now, he has not specifically withdrawn support despite calling the leak comments “Disgusting, discouraging, and damaging.”