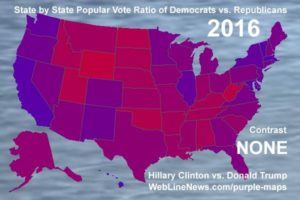 The State by State Popular Vote Ratio of Democrats vs. Republicans purple map depicts at a glance in standard party colors how the citizens of every state voted in the 2016 presidential election. Click image to enlarge. States that voted about evenly like Florida and Michigan are mixed evenly with Democratic blue and Republican red to make a near perfect purple color. States that are more on the blue side voted in greater percentages for Hillary Clinton. States that are more on the red side voted for Donald Trump.

This video shows the familiar fully contrasted map at the beginning. Contrast is reduced as the video progresses. At the end, all extra contrast is gone and a picture emerges about how the citizens voted.

While some states lean strongly toward one party or the other, every state has many supporters of each party. There is no dividing line. This is a picture the Electoral College map does not show.

The most blue states are Hawaii, Vermont, Massachusetts, California, and Maryland. The most red states are Wyoming, West Virginia, Utah, Oklahoma, and North Dakota. Six “swing states” are right in the middle: Michigan, Wisconsin, New Hampshire, Pennsylvania, Minnesota, and elector-rich Florida. Everything else is a sea of purple, some more blue and some more red.

The purple map without contrast was created by adding together votes for Democratic and Republican candidates, adjusting totals to equal 100 percent, then coloring the map in perfect proportion to those totals. Third parties were excluded as inconsequential except in Utah. In Utah, Republican Donald Trump was heavily opposed and Libertarian Gary Johnson gained 22 percent of the vote. The total of these two were combined to come up with a more realistic ratio of Republicans to Democrats.