There will be “peace through strength” as he expands military action to defeat “ISIS and other radical Islamic terrorist groups,” rebuilds the military, and adjusts alliances.

On the rebuilding of the military, the announcement provides:

Our Navy has shrunk from more than 500 ships in 1991 to 275 in 2016. Our Air Force is roughly one third smaller than in 1991. President Trump is committed to reversing this trend, because he knows that our military dominance must be unquestioned.

This language is familiar, standard Republican think-tank language that Donald Trump has now adopted straight from the pro-war establishment. In the latest version of this policy, the American Enterprise Institute (AEI) has led with a recent white paper called “To Rebuild America’s Military”:

American Enterprise Institute … provides a detailed plan to rebuild American military strength and capabilities by identifying the strategy, forces, and budgets needed to protect US interests through the next four years and decades to come. It contains a quantitative assessment of the nuclear, land, air, maritime, missile defense, special operations, space, and cyber capabilities demanded by a three-theater standard. 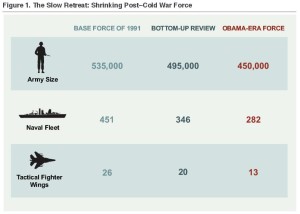 The AEI report includes specifics very similar to those described in the White House announcement and described by other Republican candidates.

See the original detailed report on the AEI policy paper and its PNAC predecessor here.

On the subject of alliances, Donald Trump notoriously suggested warmer relations with Russia, but he has also escalated opposition talk and threats to other nations. Before the election, Donald Trump appeared to oppose war generally, but there were signs that his comments were merely rhetoric. After the election, and in the first few hours of his White House term, he is already talking about expanding wars and growing the military.

Donald Trump is not against war and international actions. Lately, he has been escalating threats against China. This makes perfect strategical sense for a warrior: (1) lighten up on Russia, (2) convince Russia to support action against China, (3) take China down as much as possible, (4) double cross Russia when it is convenient.

When the military is “rebuilt,” it is built to use. It will be used. Shuffling of relations is merely a tactic. The war policy continues.

Donald Trump officially ended the Trans-Pacific Partnership (TPP) that would have created a “free trade” block with Asian nations and the United States. TPP was on its way out, but now it is gone indefinitely. Donald Trump made a strong statement to renegotiate North American Free Trade Act (NAFTA):

This strategy starts by withdrawing from the Trans-Pacific Partnership and making certain that any new trade deals are in the interests of American workers. President Trump is committed to renegotiating NAFTA. If our partners refuse a renegotiation that gives American workers a fair deal, then the President will give notice of the United States’ intent to withdraw from NAFTA.

NAFTA opened a “free trade” block between the United States and its nearest neighbors Canada and Mexico. The deal was negotiated by three successive presidents, Ronald Reagan, George Bush, and Bill Clinton. It was passed into law by Bill Clinton in 1993.