Even before the latest news from the privately run bipartisan Commission on Presidential Debates (CPD) that only the Democrat and the Republican will be in the first debate, many were clamoring for more voices and more views.

Joshua Fauver is a member of the Green Party National Committee. Thursday, the Louisiana resident posted a petition to Change.org to ask for signatures to support less restrictive requirements for inclusion of candidates into the 2016 presidential debates. The first debate is scheduled for September 26. From the petition:

We understand that not every presidential candidate running in 2015 can participate in a presidential debate. We understand that their must be some form of criteria that will limit the number of presidential candidates who will be allowed to participate in the debate. But, again, the mantra of the Free and Equal Election Foundation is “More voices, More Choices.” It is in that spirit, with that high calling in mind, that we express that we would not like the debate to unduly limit the amount of candidates who are able to participate.

With two unpopular candidates and two highly notable “third party” candidates, what better time could there be to allow new faces and new policy ideas into the debates?

The Presidential Debate Commission (CPD), despite its governmental sounding name, is actually a private nonprofit group run by a partisan Republican and supported by partisan Democrats. The “commission” was created to undermine and replace the prior sponsor of debates, the League of Women Voters (LWV).

In 1960, the first televised debates took place with Democrat John Kennedy versus Republican Richard Nixon. After three consecutive elections without national debates, LWV managed to convince the parties to resume debates starting in 1976. LWV established the modern television debate system, where there would be three debates between the presidential candidates before the election.

President [Jimmy] Carter chose not to participate in the first one because independent candidate John Anderson was included. Carter’s opponent, Ronald Reagan, did show up at that debate — and even though Carter appeared at the one subsequent debate that fall, Reagan went on to win the election.

The League of Women Voters sponsored one more debate in 1984. After that, the two big parties got together to create their own “commission” and a dispute arose.

The League continued to sponsor the presidential and vice presidential debates every four years through the 1984 elections. Following that election cycle, the Democratic and Republican national parties came together in a decision to move sponsorship of the debates under the purview of the parties.

Between 1985 and 1987 the League challenged this move and sparked widespread public debate on the matter. The LWVEF argued that a change in sponsorship that put control of the debate format in the hands of the two dominant parties would deprive voters of one of the only chances they have to see the candidates outside of their controlled campaign environment.

In 1987 the parties announced the creation of the Commission on Presidential Debates. The Commission chose LWVEF to sponsor the last presidential debate of 1988, but placed so many rules and restrictions on the possible format of the debate that the LWVEF was finally unable to agree to participate. In a press release at the time, Nancy Neuman, then LWVUS President, stated that the League had “no intention of becoming an accessory to the hoodwinking of the American public.”

Ultimately, LWV was shut out of what was described as a “fraud.”

“The League of Women Voters is withdrawing its sponsorship of the presidential debate scheduled for mid-October because the demands of the two campaign organizations would perpetrate a fraud on the American voter,” League President Nancy M. Neuman said today.

The League of Women Voters continued to prepare for debates in 1988, but the candidates went with the new party approved “commission” instead. The 1988 debates went on with only the major parties again. 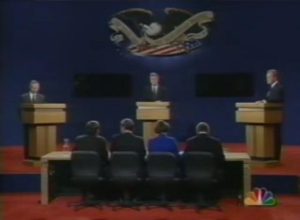 In 1992, independent candidate Ross Perot was polling in double-digits. The CPD included him in the debates. Ross Perot attained nearly 19 percent of the votes on election day. It is notable that Ross Perot scored this highly despite a major blunder in his campaign — he dropped out of the race, then returned.

Over the next few years, at least two of Ross Perot’s major policies were enacted. The budget deficit was reversed and the tax upon Social Security benefits was increased for those over certain income limits.

The extraordinary performance of Ross Perot created a myth that he was a “spoiler” for George Bush. This was untrue but the claim enhanced the popular notion that citizens should vote for ‘the lesser of two evils.’

In 1996, Ross Perot ran again. He was not polling as high, so he was left out of the debates despite calls to include him. As The New York Times article “Let Ross Perot Debate” indicated:

Four years ago [in 1992] there was no question that Mr. Perot deserved to be included. His poll ratings were in the double digits and he ended up getting 19 percent of the vote, an impressive achievement for a third-party candidate. This year, however, his candidacy has had more trouble getting off the ground. Nevertheless, he is expected to be on the ballot in all 50 states, and he has qualified for $29 million in Federal matching funds. Allowing him to debate seems minimally fair. It could also be instructive to voters, since Mr. Perot is raising issues on trade and campaign finance reform that are not being discussed by others.

Without the benefit of inclusion in the main debate event, Ross Perot still received over eight percent of the vote. The CPD then made a hard rule: each candidate must “have a level of support of at least 15 percent of the national electorate as determined by five selected national public opinion polling organizations.”

This rule would have kept Ross Perot out of the debates, and now it blocks Libertarian candidate and former New Mexico governor Gary Johnson, who appears as popular today as Ross Perot was in 1992. The bipartisan “commission” need not consider much of anything outside its desires. And despite lawsuits, the courts have not helped.

The most recent court case [PDF] found that Libertarian and Green party candidates had no right to sue at all “because antitrust laws govern commercial markets and not political activity.” Also, “the First Amendment guarantees freedom from government infringement … [not] private parties” who can censor all they want.

It is up to those who want to see more than the usual Democratic and Republican candidates in the debates to speak and to speak loudly.