Paul Joseph Watson is a commentator for the notorious Alex Jones “conspiracy” site Prison Planet. Today, with Donald Trump indicating possible support for regime change in Syria, Paul Joseph Watson posted to Twitter: “I’m done with my support for Trump if he allows Tillerson to ensnare the west in another Middle Eastern quagmire.”

UPDATE: Just minutes after this story came out, Donald Trump sent 50 to 60 missiles into Syria as a result of the chemical weapons attack. 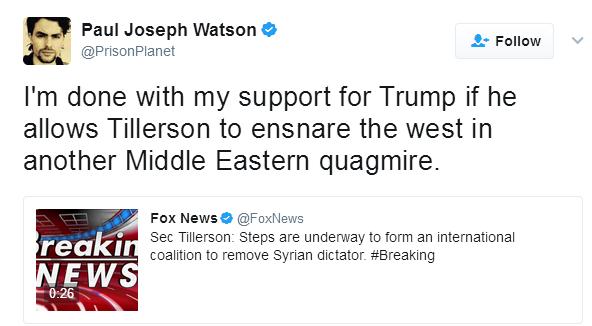 Before the 2016 election, Donald Trump did some fine grandstanding against war, particularly targeting Jeb Bush for signing onto the infamous war document “Rebuilding America’s Defenses” and supporting the disastrous Iraq War. At the same time, Donald Trump’s messages were so mixed up that his anti-war message should not have rung true. But many people, desperate for change, were willing to give him a try.

A gas attack or release occurred in Idlib Provence, Syria, killing about 60 people and injuring many more. Despite a lack of evidence so far concerning the “means of delivery” of the chemical agent, western media and intelligence insist that the attack was done by Syria or Russia. Russia denies it. UN Ambassador Nikki Haley warned that the United States may be “compelled to take our own action” against Syria without the United Nations.

When you kill innocent children, innocent babies — babies, little babies — with a chemical gas that is so lethal — people were shocked to hear what gas it was — that crosses many, many lines, beyond a red line. Many, many lines…

And I will tell you, that attack on children yesterday had a big impact on me — big impact. That was a horrible, horrible thing. And I’ve been watching it and seeing it, and it doesn’t get any worse than that. And I have that flexibility, and it’s very, very possible — and I will tell you, it’s already happened that my attitude toward Syria and [Syrian President Bashar al-]Assad has changed very much…

I’m not saying I’m doing anything one way or the other, but I’m certainly not going to be telling you…

Donald Trump previously asked for 54 billion dollars of increased military spending, right in line with the latest plan by American Enterprise Institute. His new “attitude” about Syria coupled with his push to “rebuild” the military has many Donald Trump supporters thinking about regime change.

Replies to the Paul Joseph Watson post are very mixed.

Some are concerned: “What’s disappointing is that DJT even said he wouldn’t do this.“ 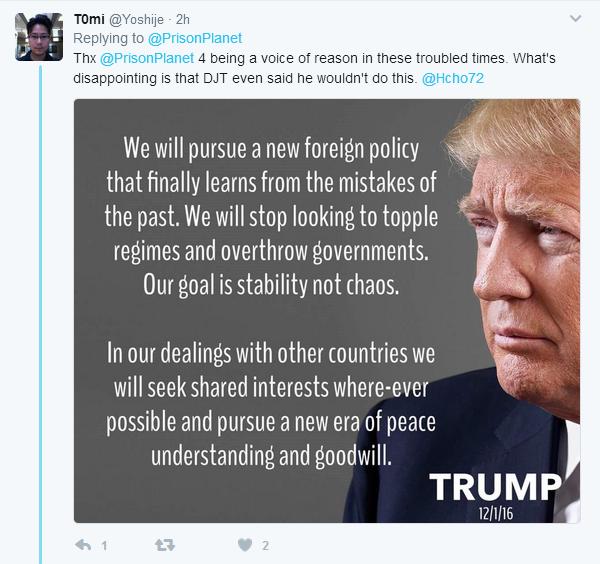 Some think this is a false flag: “Can nobody recognize a false flag? Rebels blow themselves up at the drop of a dime and won’t hesitate to sacrifice their own to blame Assad.” Hash Tag #SyriaHoax is trending on Twitter as false flag speculation increases.

Some believe the swamp swallowed Donald Trump: “Trump has been drowned in the swamp. It is every American for him/herself now.”

Some feel duped: “if he does this, he would be stabbing us all in the back.”

Some are cautiously awaiting evidence: “Usually it’s good to get absolute proof before starting ANOTHER war. This would bring us in direct confrontation with Russia as well.”

Finally, some may remain with Donald Trump no matter what: “How can Trump supporters bail? We must show our support in Trump and his administration.”