Probably his greatest claim to fame in being an outsider who would take on the establishment by Republican presidential candidate Donald Trump is his stated opposition to continued wars. For those who are supporting Donald Trump because they believe he is going to end wars, better think again.

1. Donald Trump was for the Libya war before he was against it. Just five years ago, Donald Trump prepared his video “From the Desk of Donald Trump,” an official announcement that the United States needed to go to war. Donald Trump declared, “We should go in, we should stop this guy… Immediately go into Libya …” Now, he says it was all a mistake, a “disaster.”

2. Donald Trump claimed he voted for George W. Bush in 2004 despite opposition to the expanded Iraq war. Donald Trump said, “I voted for Bush because I think he got certain things that are excellent, including a tax policy … But I am not a big fan of the war … ” Even assuming we believe Donald Trump on those occasions where he says he was against the war, just hand him a generous personal tax cut and he condones expanding wars.

3. Donald Trump wants to increase defense spending which implies more war. It gets worse: Donald Trump now uses the very same language devised by those behind the George W. Bush agenda. The military is “not ready” and needs to be “rebuilt.” This standard Republican neocon language is a direct appeal to the war loving neocons. Recall that George W. Bush went to war literally just days after the last budget year of “not ready” Bill Clinton ended. The war machine that crushed Afghanistan was built in the Bill Clinton years, and it did the job just fine. The additional “rebuild” is needed only to expand wars.

4. Donald Trump comments about nuclear attack and nuclear proliferation do not inspire peace or security. (a) By remaining “unpredictable” about nuclear preemption, Donald Trump aligns with a neocon policy that originated with Republican George Bush and was picked up later by Democrat John Kerry. (b) By cutting off military support for allies, Donald Trump inspires nuclear development in additional countries. Donald Trump says those countries including Saudi Arabia will obtain nukes anyway, but history largely differs. (c) Donald Trump wants to renegotiate the fresh Iran deal. This is much like when George W. Bush continued to insist on greater threats against Iraq even though Saddam Hussein was abiding in substance with the mandates against weapons of mass destruction (WMDs). And we all know how that went.

5. Donald Trump promises more war against ISIS. The candidate who is against war contradicts himself directly with promises more war. Donald Trump claims that ISIS is now in 32 countries. Attacking ISIS in different nations would expand wars, expand terror attacks, and further entrench the 2001 Authorization to Use Military Force (AUMF) that essentially permits the United States to bomb any country in the world. (list continues below) 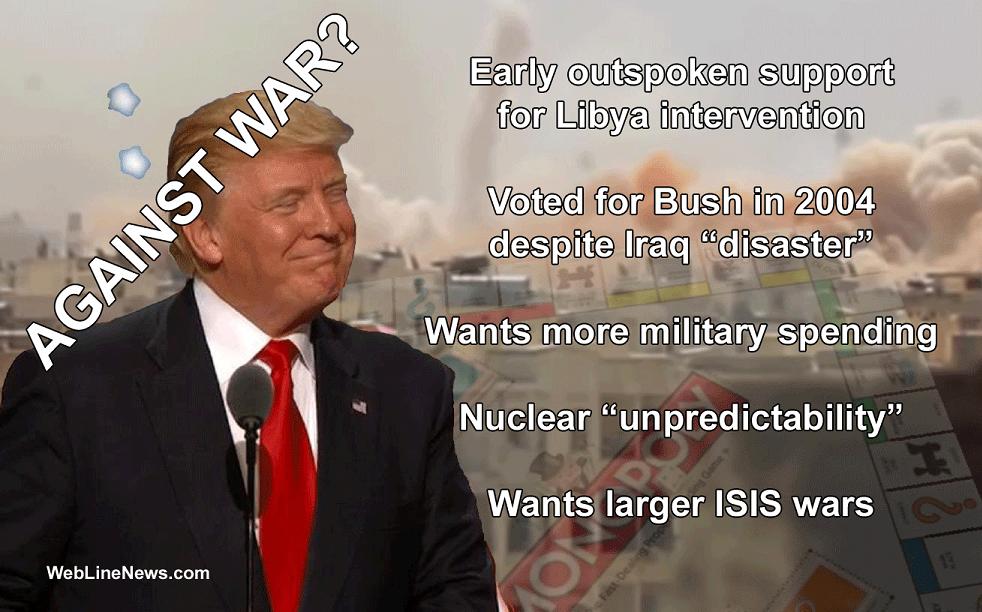 6. Donald Trump could be convinced or pressured into war with great ease. The Congress would have much the same bipartisan war supporters. The press would continue to be a tool for convincing the public to go to war. Under this pressure, Donald Trump would “cave in.” Another terror attack is inevitable. Once it occurs, Donald Trump will rush to be the first to push for military action — like he did in Libya.

9. Donald Trump domestic policies are the natural compliment to war support. His need to increase “law and order” is of most concern here. Opposition to wars has been one of the greatest inducements for protesting. Once a law and order crackdown applies to African Americans and immigrants, it will be used analogously against war protestors. Recent Republican Supreme Court Justice appointments John Roberts and Samuel Alito have nearly perfect records of supporting police powers over Fourth Amendment rights. These are the kinds of Justices Donald Trump would nominate. During and after Donald Trump, there will be no court protection to stop such crackdowns.

10. Donald Trump’s word simply cannot be trusted. Besides his obvious flip-flops on Iraq and Libya, his word is virtually meaningless. Donald Trump has changed positions too many times to discuss here. Too much has been said on this.