A few days ago, Julian Assange head of WikiLeaks sat down with John Pilger for an interview. After a few days of teasers, the interview is being played on Russia Today today. Russia Today is a government sponsored television station available on cable services and online.

Julian Assange says claims that Russia was behind the John Podesta emails are “false.” He talks about Barack Obama and how CitiBank helped choose his cabinet. He describes intervention in Libya as Hillary’s war. Julian Assange also tells us what he finds to be the most important release from the Podesta emails. (Interview highlights below)

Here are direct quoted highlights from the interview. See an entire transcript here. 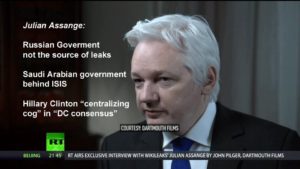 Julian Assange talks at length about his confinement in the Ecuadorian Embassy. He notes that he was cleared of the original rape charges that pushed him into the embassy. Now, people are “pretending” that he has been charged with a crime.