The Donald Trump government may try not be very transparent, but the adolescent activities of the White House occupant are plain as day. Yesterday, multiple members of the administration got into some trouble when his son Junior provided “Two Different Explanations for Russian Meeting“:

In less than 24 hours, President Trump’s eldest son, Donald Trump Jr., has given two different explanations for a meeting he held during the 2016 campaign with a Kremlin-connected Russian lawyer who promised to provide damaging information about Hillary Clinton.

First, Donald Trump, Jr., said that the meeting involved discussing adoption. Faced with contradictory claims from Donald Trump’s advisors, Junior changed his story to say he was promised “information helpful to the campaign.” He said the information provided was not “meaningful.”

Some of the details of the Russian meeting was revealed in an earlier story the same day:

Donald Trump Jr., was promised damaging information about Hillary Clinton before agreeing to meet with a Kremlin-connected Russian lawyer during the 2016 campaign, according to three advisers to the White House briefed on the meeting and two others with knowledge of it.

There was also another article about the meeting on the prior day. For the past three days, the internet has been chock full of Donald Trump, Jr., collusion stories.

With Donald Trump’s son under the pressure of fresh Russia collusion allegations by members of Trump’s own team, there was only one thing to do — deflect to someone else’s child — a daughter with last name Clinton. 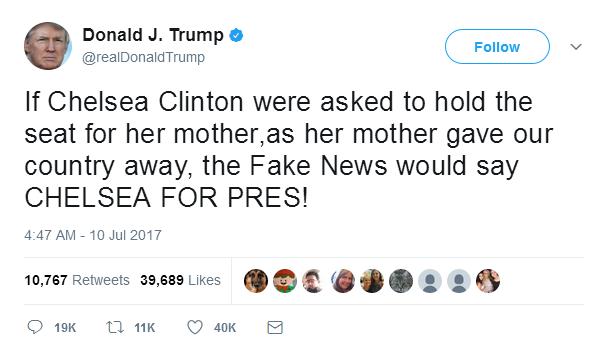