“Social Security is $32 trillion in the red, in terms of unfunded net future liabilities, which is $6 trillion more than reported last year… ”

Social Security is not in the red currently, and holds a net asset of $2.9 trillion, which is enough to cover expected shortfalls through 2034. After that date, SSA will continue to receive enough money to pay about three-quarters of benefits through 2090 assuming no program changes. These predictions are about the same as last year, very slightly improved. The $6 trillion more applies to the period after 2090, called the “infinite horizon.”

The Trustees Report explains the total projected shortfall of $32.1 trillion: “The $20.7 trillion increment reflects a significant financing gap projected for OASDI for years after 2090 into perpetuity.” In other words, funding is short by $11.4 trillion for the next 75 years, through 2090, and short $20.7 trillion more forever.

This shortfall to infinity assumes a GDP (Gross Domestic Product) of $2361.4 trillion ($2.4 quadrillion), and a gross wage base subject to Social Security of $801.4 trillion. The difference of $1560 trillion will go to people who make money but are exempt from paying the Social Security tax. Let’s graph these numbers. 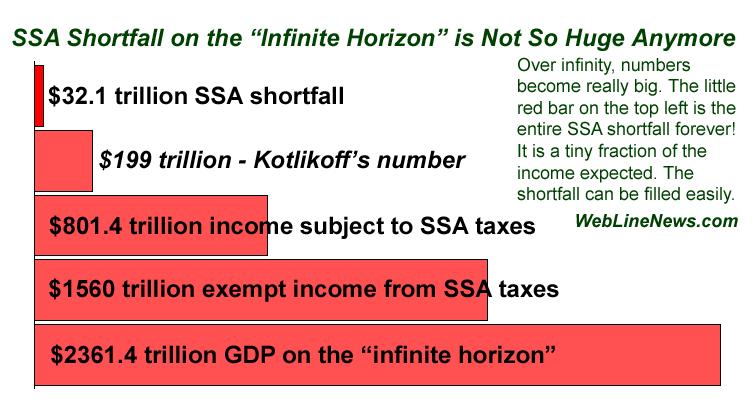 The Trustees Report explained the $6 trillion increase over last year’s projection. “The major change affecting the infinite horizon unfunded obligation for this report is the reduction in the ultimate real interest rate from 2.9 percent to 2.7 percent, which provides more weight to annual shortfalls in the more distant future.” A small interest assumption change 75 years out and beyond has a big effect.

Laurence Kotlikoff does not think this money can be found. “Make no mistake, while the Federal Reserve has printed a few trillion already, it cannot print $199 trillion to bail out the economy. That would produce the mother of all hyperinflations.”

As mentioned above, $11.4 trillion will fill the entire SSA hole for 75 years. From 2008 through 2014, the Federal Reserve Bank “purchased almost $4.5 trillion in Treasury and mortgage bonds.” This policy would eat up $11.5 trillion in just 16 years. Even with this spending, inflation was kept fairly low by historical standards. Inflation worries only apply to disfavored spending like retirement — not to bank and asset bailouts.

Somehow, Laurence Kotlikoff tied the $11.4 trillion over 75 years and the additional $20.7 trillion to infinity with this $199 trillion of who-knows-what. That number sounds really large! We added it to the graph above earlier.

There are many ways and combinations to fill the hole. The entire shortfall is “1.4 percent of GDP.”

We could also place an SSA tax upon unearned income.  In the 2009 Patient Protection and Affordable Care Act, a medicare surcharge of 3.8 percent was added to those who received unearned income over $250,000. The next year, the Trustees Report showed a 12-year improvement in the Medicare fund. Something like this would work just fine for Social Security — or there are dozens of other ways to take care of our seniors.