“Walk Away” leader Brandon Straka joined the r/WalkAway community at Reddit as a moderator and set up an Ask Me Anything (AMA) event. AMA is Reddit terminology for pages set up by well known people to take questions from the general public. Brandon Straka has received much notice lately for claiming to be both a gay man and a Democrat who “walked away” from that party and joined Republicans. The AMA did not go as hoped …

On Twitter, Brandon Straka announced that he believed in “free speech” and supported Alex Jones and InfoWars against a service ban:

Brandon Straka (The Unsilent Minority) @usminority
…@RealAlexJones has been a friend and supporter to me and #WalkAway Campaign. I believe in free speech and open platforms for people to decide for THEMSELVES what they want to hear and see and read. It’s time to stand up. #WalkAway 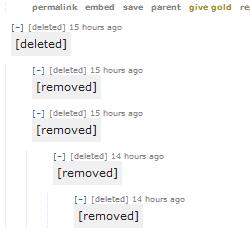 But over at the Reddit WalkAway community, “free speech” moderator Brandon Straka engaged in or permitted the removal and ban of users who asked tough questions or who disagreed. Reddit moderators including Brandon have the power to censor, ban, or allow user comments. Turns out, the AMA was a festival of censorship. Ultimately, Brandon Straka and the team of WalkAway moderators locked the page down so that nobody could comment anymore.

INVITATION FROM THE MAIN POLITICS COMMUNITY

The AMA was advertised at the Politics community, where a cross-post submission was created, which was immediately locked from user comments:

[–]likeafox[M] – stickied comment
This is a crosspost, approved at the request of the community moderators at r/walkaway. We encourage users to head over and ask questions of their AMA guest, but please be certain to follow the community rules.

ASK ME ANYTHING, BUT NOT THAT

Thanks to archive services, we can see what questions and disagreements were censored by “free speech” Brandon Straka and his WalkAway friends:

DC25NYC20 enters concerns about sources of the WalkAway movement:

If it’s so successful how have I not heard anything about it other than in right wing subreddits that are often flooded by Russian trolls?

After being personally insulted by other users, DC25NYC20 finally comments again:

So im a f[]ing Moron for looking for existence of this movement outside of this sub and right wing subreddits? It’s not like I live in a highly liberal area and would probably hear about this movement being that people on here said this movement has “close to 500k followers”

The final response? Censorship. Comments are removed and users banned from the community:

Banned me for asking why despite living in nyc/northeast aka a very progressive area, I have only heard of this “movement” on right wing subreddits. Despite a user claiming this movement has around “5OOK FOLLOWERS” all of this despite the fact the very sub only has 6k users.

Skeptical user NeonGKayak, asks directly why we should believe that Brandon Straka was ever “truly a liberal”:

The way you throw around the word liberal makes it seem like 1. You were never truly a liberal, 2. Are actually a Republican, 3. Are pushing propaganda and a narrative that doesn’t exist. For example”we want our country back” from liberals? Because it’s the republicans that are actively destroying it.
So, my questions are:
Why should we believe you when you say you’re a liberal but do not hold any liberal views?
How do we know you are a liberal in the first place? Is there proof such as who you voted for in the past, posts promoting democrats and liberals, etc. or is this more of a take your word for it?

Again, user questions are censored. A person who has changed his view would normally welcome such questions, and try to convince the skeptics. But not here. Censored. Even this innocent question by user Aschebescher is left unanswered:

What policies did you believe in back when you were a liberal?

This simple question by SeatedLiberty4 is not only unanswered, but also removed:

Have you received funding from any Republicans politicians or PACs?

A simple ‘yes’ or ‘no’ would suffice, Brandon. Throughout the AMA, Brandon speaks warmly to those who agree, repeatedly consoling others with comments like “I am so sorry for what you have endured, but you are not alone!” But tough questions — or even questions that are not totally one-sided — remain unanswered, with so many removed and users banned.

The language of Brandon Straka is quite revealing. It is the same old Republican propaganda that has often been described euphemistically as “trolling”:

Liberals begin with the assumption that they are more spiritually and emotional evolved than conservatives, and that conservatives are deficient in moral character… once they have dried their tears … we are so grateful to Alex and everyone else who has helped to contribute to the success of our campaign… [etc.]

User vincethered responds to the “assumptions” of “liberals”:

Isn’t that a sloppy over generalization? Surely you’re not suggesting that “all liberals are this way”.

Brandon Straka warns that some Republicans are not very good, but all Republicans should be supported no matter what:

I think there is much of the old guard of Republicanism that needs to take a seat, however, we don’t currently have the luxury of making that our priority.

Brandon Straka’s Twitter account goes back to 2009, but his oldest available post is from February 2017. Every Tweet since then is like an advertisement for Donald Trump, with no thoughtfulness, no introspection, and no reasoned analysis. His only serious attempt to explain his transition in the AMA was this:

My #WalkAway was a process that unfolded over the course of months. It began with a realization that the media on the left had been SO dishonest and deceptive about Donald Trump and his supporters during his campaign and after his election.
This set me on a path of research for the truth.
The final straw, when I knew I had to #WalkAway was when Rachel Maddow went on a tweeting frenzy assuring us that she had his tax returns and implying that this smoking gun would put Trump under.
What happened next was an hour of television more boring and irrelevant than amateur women’s golf.

He was bored by Rachel Maddow, so he flip-flopped on all of his beliefs; or as another Reddit user described it, “The dude said he completely changed his political view points because he didnt like Rachel Maddow.”

On Twitter, Brandon Straka posted a whole string (aka “tweetstorm”) of one-liners to prop up the hashtag “TriggerALiberalin4Words” before the WalkAway campaign began. Most of his Tweets had exactly one Twitter “like,” awarded by Brandon Straka to Brandon Straka: 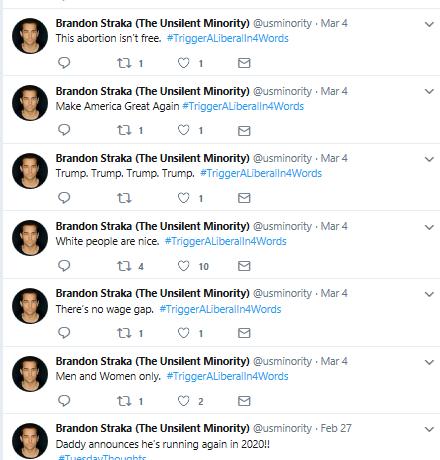 His self-liked Tweets were posted before Alex Jones, Fox News and partisan spam machines began to pay Brandon Straka money and promote the WalkAway advertising. Now, his once floundering online presence is a big success. As he describes it in the AMA:

I just spent time in L.A. and D.C. to support Dinesh D’Souza’s new movie, “Death of a Nation”, and I was recognized by everyone at both events. That was fantastic!

Ironically, after his excitement about being “recognized,” he claims that he reversed his views to be true to himself:

The question I asked myself was, “What is more important? Being true to myself, or being well-liked?”

The fact is that Brandon Straka is a star now because he became a full-fledged Republican partisan with a novelty shtick — the gay liberal who walked away from the Democrats — eligible for political-viewpoint affirmative action and promotion. Before that, he was essentially ‘nobody.’ He says he is now a full-time Republican partisan because he “had to stop working to focus on #WalkAway”:

I have not been taking clients for about six weeks. I decided about a month and a half ago that saving America AND doing blowouts was just too much!

Too much money? Too much fame? Enough to no longer have to work, apparently. Next, he is going to get his singing career off the ground — all for a good cause, himself, just like Donald Trump.

If there is any truth to the Brandon Straka campaign to Walk Away from Democrats, let him show us the evidence. Where are the seven years of Tweets preceding his Trump support, or anything else?

I don’t support censorship in any way. This is why I think Reddit is a cool concept. Let the free market decide how people feel about other people’s comments. 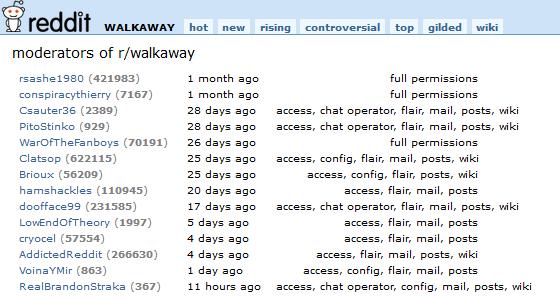 If that’s true, then he must restore all the censored comments, and remove all the bans on the users at the “official” Reddit site of his Walk Away movement, a place where he is the moderator and has both the official and actual power to do so. Also, unlock the AMA and let the free speech flow.