The Brennan Center released a new report this week entitled Purges: A Growing Threat to the Right to Vote [PDF]. The detailed report shows excessive voter purging in all 50 states. A stunning 16 million voters were purged before the 2016 election: 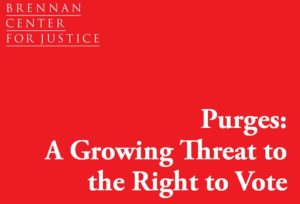 We found that between 2014 and 2016, states removed almost 16 million voters from the rolls, and every state in the country can and should do more to protect voters from improper purges… Almost 4 million more names were purged from the rolls between 2014 and 2016 than between 2006 and 2008… This growth in the number of removed voters represented an increase of 33 percent — far outstripping growth in both total registered voters (18 percent) and total population (6 percent).

The Brennan Center report finds that voter purging increased markedly in states that were freed from the “preclearance” requirement of the 1965 Voting Rights Act after a 2013 opinion by a 5-4 Supreme Court overturned the rule. For 48 years, states with a history of discriminatory voter purges had to get “preclearance” from the Department of Justice before making changes. Since 2013, states can make any changes they want, and run them right through the election as they languish in court challenges.

In the end, 16 million previously registered people lost their right to vote. This was before the new Supreme Court decision in Husted v. Philip Randall Institute. [PDF]

Larry Harmon voted in presidential elections. He voted in 2004 and 2008. In 2012, he was not happy with the candidates, so he refused to vote. Then, in 2015, he wanted to vote against a marijuana legalization initiative. Larry Harmon found out that he was no longer registered to vote.

Larry Harmon skipped six years of elections. The State of Ohio sent him a “confirmation” postcard after two years. The card directed him to confirm his address by returning the card or voting within four years or lose his right to vote. Larry Harmon claims he did not receive the card. The card looks like junk mail and most people do not return it.

Larry Harmon contacted a voting rights group and sued for his right to vote. At the trial court, he lost. At the appeals court, he won. Then, the case arrived at the Supreme Court.

Last month, just before the report that 16 million people were purged came out, the Supreme Court decided in a 5-4 opinion that the National Voting Rights Act (NVRA) and the Help America Vote Act (HAVA) permit purging of people who skip elections then fail to return a “confirmation” card in the mail.

In a 21-page opinion, Samuel Alito harps on every possible angle of interpretation of the law. But he makes one huge mistake right at the beginning that renders his entire analysis an absurdity: he literally quotes the law then changes the language before his arguments begin. He analyzes the language he imagines — not the language in the law.

To explain the Samuel Alito slight-of-hand, we need to look at the law itself. The law is divided into four parts or subdivisions summarized here:

It is clear from the bolded language above that a voter may not be purged unless and until conditions in both subsections (c) and (d) are met.

Samuel Alito has no problem quoting the law correctly many times, then abruptly contorts it:

The first is a prohibition that was included in the NVRA when it was originally enacted in 1993. It provides that a state program “shall not result in the removal of the name of any person . . . by reason of the person’s failure to vote.” Ibid.
The second part, added by the Help America Vote Act of 2002 (HAVA), 116 Stat. 1666, explains the meaning of that prohibition. This explanation says that “nothing in [the prohibition] may be construed to prohibit a State from using the procedures described in [§§20507](c) and (d) to remove an individual from the official list of eligible voters.” §20507(b)(2). These referenced subsections, §§20507(c) and (d), are the provisions allowing the removal of registrants who either submitted change-of-address information to the Postal Service (subsection (c)) or did not mail back a return card and did not vote during a period covering two general federal elections (subsection (d)). (Bold added)

Samuel Alito suddenly twists ‘(c) and (d)’ to ‘either (c) or (d)’ — literally the single dumbest thing a lawyer could do to interpret language. The word “and” means all conditions must be met. The word “or” means only one condition must be met.

Hence, Samuel Alito may now skip right past the subsection (c) requirement to get information from an outside source like the postal service, and jump right to subsection (d) to run the purge process all by itself. He concludes that the purge process may be run on everyone who skips elections.

Perhaps any lawyer, even one of the highest esteem at the Supreme Court, is capable of making a dumb mistake at some point. But Samuel Alito was directly warned of his misunderstanding. During oral argument, Mr. Smith, attorney for the voter, pointed out specifically that the law requires both subsection (c) and subsection (d) before voters could be purged:

Mr. Smith told Samuel Alito exactly what the law said — “and” not “or” — but Alito denied it and contorted it anyway. From this basic error, all of his further analysis — all 21 pages — fails. Samuel Alito writes the opinion, and a purely partisan 5-4 Court of Republicans sign on — Chief Justice John Roberts, Anthony Kennedy, Clarence Thomas, and Neil Gorsuch.

They all sat there and heard the argument over whether the law required ‘(c) and (d)’ or ‘either (c) or (d),’ and somehow, they got it plainly wrong. This is called result-oriented analysis.

STEPHEN BREYER AND THE DISSENT

Stephen Breyer wrote the dissent and Ruth Bader Ginsburg, Sonia Sotomayor, and Elena Kagan signed on. Stephen Breyer noted that both subsections (c) and (d) must be followed. He also noted that subsection (d), the “confirmation” process, must actually confirm something:

The procedures described in subsections (c) and (d) consist of a two-step removal process in which at step 1, the State uses change-of-address information (which the State may obtain, for instance, from the Postal Service) to identify registrants whose addresses may have changed; and then at step 2, the State must use the mandatory “last chance” notice procedure described in subsection (d) to confirm the change of address… you cannot confirm that an event happened without already having some reason to believe at least that it might have happened.

Samuel Alito eventually analyzes subsection (c) on its own, admitting that it means something:

Subsection (c) says that “[a] State may meet” its obligation “to remove the names” of ineligible voters on change-of-residence grounds by sending notices to voters who are shown by the Postal Service information to have moved, but subsection (c) does not even hint that it imposes any sort of minimum reliability requirement for sending such notices. §§20507(a)(4), (c). By its terms, subsection (c) simply provides one way–the minimal way–in which a State “may meet the [NVRA’s] requirement[s]” for change-of-residence removals. §20507(c). As respondents agreed at argument, it is not the only way. Tr. of Oral Arg. 53.

OTHER OPINIONS IN THE CASE

The final Supreme Court decision came out with Samuel Alito and four Republicans on one side, and Stephen Breyer and three Democrats on the other — a perfect 5-4 partisan split. Additionally, Clarence Thomas wrote a solo concurrence where he questioned federal power to regulate state elections, and Sonia Sotomayor wrote a solo dissent describing the purposes of voting laws.

Clarence Thomas writing for himself says the Court’s outcome is acceptable, but he would take the opinion further. The National Voting Rights Act (NVRA) “would seriously interfere with the States’ constitutional authority to set and enforce voter qualifications.” States have the “authority to verify” voter qualifications, not the federal government. To support this view, he quotes generously from his own prior writings.

Stephen Breyer disagrees. Looking at cases dating from 1880 to 2013, he notes that the federal government has “the constitutional authority to enact ‘regulations relating to registration.'”

Clarence Thomas would disagree too if the case involved overruling a state supreme court, stopping a vote count and installing a candidate into the White House — as long as the candidate was one that he liked. That’s what he did in the 2000 case Bush v. Gore.

In addition to the Stephen Breyer dissent, Sonia Sotomayor wanted to say more about the reason the laws were updated in 1993:

Congress enacted the NVRA against the backdrop of substantial efforts by States to disenfranchise low-income and minority voters, including programs that purged eligible voters from registration lists because they failed to vote in prior elections. The Court errs in ignoring this history and distorting the statutory text to arrive at a conclusion that not only is contrary to the plain language of the NVRA but also contradicts the essential purposes of the statute, ultimately sanctioning the very purging that Congress expressly sought to protect against…
Ohio’s Supplemental Process [subsection (d), the “confirmation” process] reflects precisely the type of purge system that the NVRA was designed to prevent. (Bold added)

The dissents have a policy disagreement, not just with Ohio, but with Congress. But this case presents a question of statutory interpretation, not a question of policy.

Actually, “distorting the statutory text” describes a matter of “statutory interpretation” — not a “policy disagreement.” But apparently, Samuel Alito cannot be wrong. In the end, he throws an insult to the four Justices who disagree: “no sensible person would read the Failure-to-Vote Clause as prohibiting what subsections (c) and (d) expressly allow.”

This year who knows how many more than sixteen million voters will be purged. The number will be huge. Representative democracy hangs in the balance.