In that opinion, Supreme Court Justices Anthony Kennedy, John Roberts, Antonin Scalia, Clarence Thomas, and Samuel Alito declared that money equals speech and that freedom of the press equals freedom of the corporation to spend unlimited money on buying campaigns.

10 must-know facts from before and after the Citizens United v. FCC case

1. In 1991, the advocacy group Citizens United was created for the purpose of campaigning to promote Clarence Thomas to the Supreme Court. He may have owed his narrow victory in the Senate vote (52-48) to this advocacy.

3. In 1998, David Bossie was forced to resign from a campaign funding investigation into the Bill Clinton administration for releasing misleadingly edited interview tapes. He went on to become the president of Citizens United.

4. Citizens United attempted to use FCC rules to block advertising of a movie. In 2004, Citizens United filed a complaint to the FCC against the Michael Moore commentary movie Fahrenheit 911 because promotions mentioned a candidate’s name (George W. Bush) too close to an election. The film was permitted to continue.

5. The object of the Citizens United case was Hillary Clinton. In 2008, Citizens United released its own “electioneering” movie, Hillary, The Movie. The movie was advertised close to an election under the FCC rule. This time, Citizens United found itself on the other side of the speech issue.

7. The new electioneering entity created became known as the Super PAC. According to Open Secrets, Super PAC funding went from zero before the case to nearly a billion dollars so far this year just four federal election cycles later. 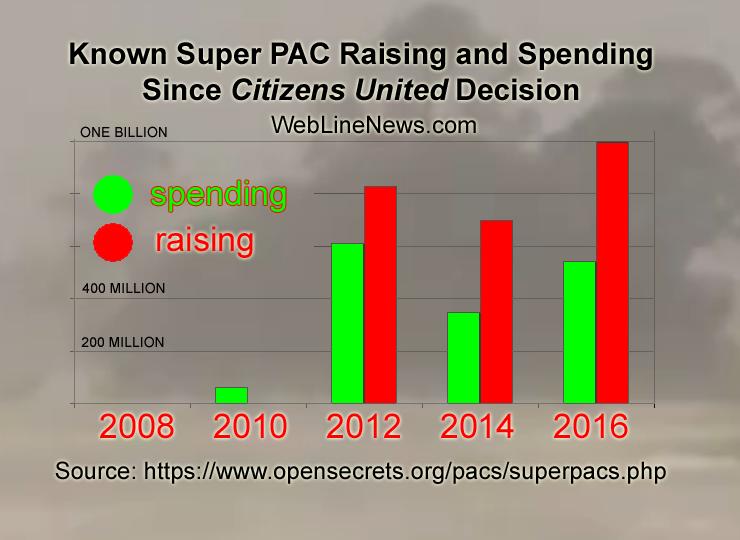 9. The Supreme Court drew a line at campaigns for judges. In a 2015 case, a 5-4 Court upheld a law preventing elected judges from directly soliciting campaign funds. However, judges may still have their campaigns ask directly for those funds, and judges may still review lists of the donors. The crossover Justice was John Roberts, who wrote the decision.

10. Four Justices who voted against Citizens United indicated that they may overturn or narrow the decision [PDF] given an opportunity to do so. In a 2012 Supreme Court Order, Stephen Breyer, Ruth Bader Ginsburg, Sonia Sotomayor, and Elena Kagan dissented from the Order to say that they would “reconsider Citizens United or, at least, its application in this case.”

With Donald Trump hiring the chief of Citizens United, his earlier comments opposing Super PACs as a “totally phony deal” will need revisiting.