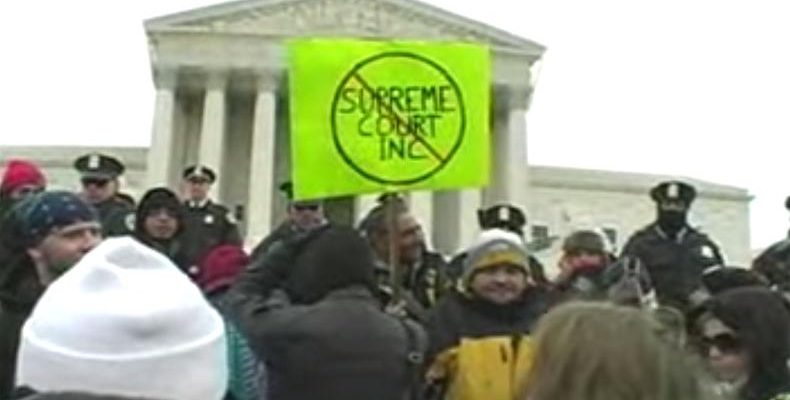 “Super PACs” (Political Action Committees) are nonprofit political organizations that are permitted to “electioneer” for candidates. Electioneering consists of spending money on advertising and promotion for favored candidates. Super PACs are required to be “independent” of the candidate’s official campaign. This means they are not allowed to coordinate electioneering activities directly with the candidate. More broadly, Super PACs are a form of “outside spending” groups.

In January 2010, the Supreme Court of the United States decided the campaign electioneering case Citizens United v. Federal Election Commission (FEC) by a 5-4 vote. The Court declared that “independent” groups including business corporations were entitled to a First Amendment “speech” right to spend unlimited money on “electioneering” — as long as the Super PAC does not coordinate with the official campaign. Other deregulation decisions followed, including SpeechNow v. FEC, which removed donation limits.

As a direct result of the Citizens United decision and its progeny, Super PACs were created. Super PACs did not exist prior to the 2010 decision. Since then, Super PAC spending has increased in both dollar terms and as a percentage of all election funding.

A new special report from Wesleyan Media Project looked at all of the election advertising data available for the period from 2000 through 2016 and created this stunning graph.

In the first few months of deregulation, big changes took place. The 2010 midterm elections saw an increase in the ratio of outside spending to total spending to about as high as the 2004 presidential election year. Normally, in a non-presidential year, spending would be less.

The very year that big money was given freedom, the “Tea Party Revolution” took place. From then on, spurred by Super PACs, outside spending skyrocketed to unprecedented levels. Disclosure of donors has been tardy or sketchy. As of August 2016, outside groups are responsible for nearly a third of all election spending.

INDEPENDENCE IS WORSE THAN COORDINATION

The strangest thing of all is the mindless acceptance of the notion that “independent” expenditures are somehow valid, but coordinated spending with campaigns is not.

Essentially, this philosophy fails to consider that campaigns and politicians have virtually no say in making policy decisions different than those promoted by outsiders with money. The outsiders decide what is important and which policy viewpoints or emphasis is rewarded — and the politicians have no say! If a candidate wants money from these massive Super PAC sources, they will say what those with the big funds want to hear, period.

Then , the competition starts. Once one candidate is willing to say something like “global warming is fake” to gain eight or nine figure sums, the others must compete with greater outlandishness for the pot of money. Eventually, mainstream candidates are declaring things like “Obama was born in Kenya.”

On the other side, there is far more latitude to do the bidding of traditional funding sources, which also happen to be super wealthy people — and to appear relatively “moderate.” One party heads inevitably toward insanity while the other heads comfortably to a new corporate “middle.”

Throw on top of this massive campaigns of negativity filling the airwaves and the internet, and democracy can go take a hike. Boil it over with 89 percent issue-free “mainstream” media coverage and doom looms.

As the legendary 1800s saying goes, “corporations have been enthroned” — through unlimited funding by big corporate wealth holders. Next thing we know, all the candidates are saying crazy things or taking massive corporate money from traditional sources and making their own Super PACs.

THE BOOM-BUST CYCLE OF ELECTIONEERING

Welcome to 2016. Donald Trump and Hillary Clinton are the most unpopular pair of candidates in living memory. The Koch brothers and others were so wildly successful in selecting politicians that the schism between the people and the government heads toward a breaking point — just like when stock price-earnings ratios rise to stratospheric levels of “irrational exuberance.”

Just as surely as the stock market falls, the political system crashes. This is the result of the new boom-bust cycle of unlimited electioneering courtesy of Anthony Kennedy, John Roberts, Antonin Scalia, Clarence Thomas, and Samuel Alito — the five Justices who overturned the campaign laws.

Americans on both the conservative and liberal side are furious, and for good reason. The star candidate of the 2016 campaign, Jeb Bush, flops like a pancake onto the floor despite his warchest with the most outside money in history — and the rest of the field had to be so crazy to rise up to the level of presidential candidate that none of them can be sold anymore. All the promotion in the world won’t sell rotten eggs either. So Donald Trump catches on like wildfire, and no amount of money can stop him.

On the other side, a “socialist” insurgent who is not even a member of the official party gives the chosen candidate a run for her money. The anointed candidate squeaks out a victory as the corporate media does a complete about-face: perhaps for the first time during the two year cycle, Hillary Clinton’s coverage goes net positive.

Pundits fabricate a new reality with two major points of propaganda. First, the media supports the Democrats, and second, campaign funding does not decide elections. Neither of these things are true, but the narrative must continue.

First, the media does not support Democrats. This is the same media that promoted plainly false charges against Iraq about its stockpiles of weapons of mass destruction (WMDs). Rather, the media supports war. The presidential candidate of the Democratic Party has long been a major war supporter, even while others were noting the plain and blatant LIES about WMDs. In this election, and given the anti-war rhetoric of Donald Trump, the Democratic candidate appears to have suddenly become the establishment favorite.

Second, campaign funding has always been one of the main indicators to decide elections, with incumbency the other major determinant. This year is anomalous only for the presidential election and only because the pool of candidates pandered to the whims of the Super PACs to such an extreme that they went bust. Just as the stock market returned to record highs after the 2008 crash, the unregulated money will be back again to control the presidential candidates more tightly.

In the meantime, those vast sums of money will not be wasted — they will be used to push for an even more wealth-friendly Congress and spent in state and other elections. Until the Super PAC funding sources regroup and do it all again, the boom-bust cycle of electioneering is the new normal — just as certainly as the stock market will crash.