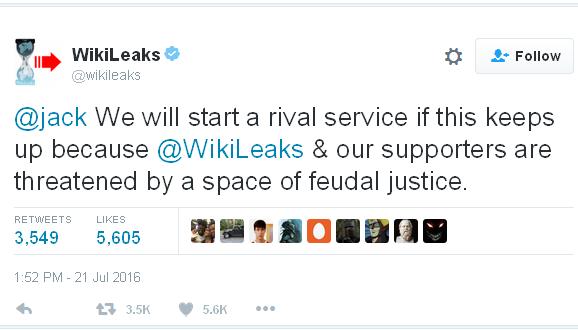 Twitter banned Milo Yiannopoulos without detailed explanation, but Milo had posted a fake tweet to Ghostbusters actress Leslie Jones which placed the bigoted word “kike” in her mouth. Leslie Jones left Twitter but returned to post again after Milo was suspended.

After Milo Yiannapoulos (user name @Nero) was “permanently suspended” from his account, the official WikiLeaks account (user name @WikiLeaks) with over three million followers weighed in to oppose the suspension strongly — at one point suggesting that WikiLeaks could create a rival service to Twitter.

WikiLeaks began by calling the ban “cyber feudalism,” invoking Twitter founder Jack Dorsey by his user name @Jack, and complaining that he “banned conservative gay libertarian @nero for speaking the ‘wrong’ way to actress @Lesdoggg” referring to the user name of Leslie Jones, actress in the movie Ghostbusters.

Jack Dorsey replied to WikiLeaks: “we don’t ban people for expressing their thoughts. Targeted abuse & inciting abuse against people however, that’s not allowed.” The founder’s vague comment was unsatisfactory to users who were looking to #FreeNero from the ban and to those who wanted specific information to support the ban.

WikiLeaks continued with a series of Tweets. “Who has access to justice? Many have had vastly worse. What’s the appeal mechanism? What’s the transparency of the process?” These are all very good questions that apply to all of the social networks. Unfortunately for those who would like actual transparent rules and appeals processes to prevent free speech censorship, there is no obligation for a corporation to provide such due process — no matter how important its service becomes to society or employment.

WikiLeaks then warned, “We will start a rival service if this keeps up because @WikiLeaks & our supporters are threatened by a space of feudal justice.”

Jack Dorsey responded, “all fair points. We are working to get here.” Most of the users’ replies found this response inadequate, but WikiLeaks eased off, declaring “Good news.”

WHAT MILO ACTUALLY DID

Milo Yiannapoulos, Twitter user name @nero, sent out unflattering Tweets about Leslie Jones, supporting his followers as they posted nasty comments against the actress. But one Tweet Milo sent stood out. 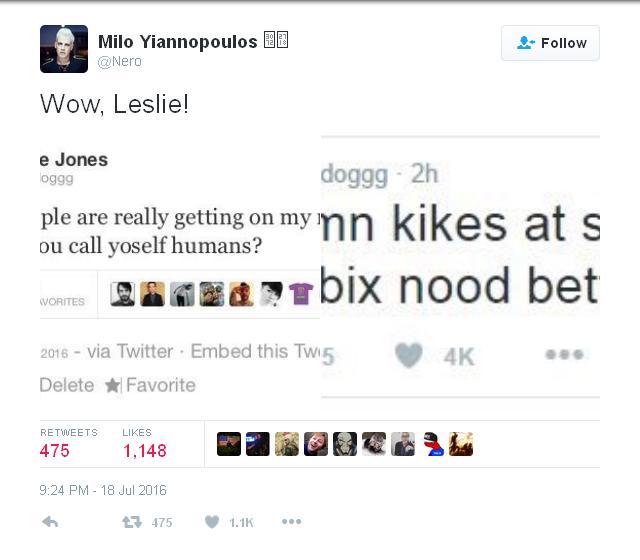 In this Tweet, Milo egged-on those attacking Leslie Jones by spreading a fake Tweet — a fraud — a lie — accusing her falsely of using the word “kike” to describe Jews — a well-known term of bigotry. Here is the deleted Tweet at the Internet Archive.

It is curious that neither WikiLeaks nor Jack Dorsey mentioned this Tweet in their conversation. Perhaps neither knew about it at the time. Meanwhile, at partisan sites like Breitbart.com who took the side of Milo and wanted to #FreeNero from the “permanent suspension” for the sake of “free speech,” the exact nature of this fraudulent Tweet was not disclosed.

Breitbart, the employer of Milo, attempting to minimize the “kike” Tweet, put it this way. Milo:

Shared a fake screenshot (made clear with the lack of a verification check mark) someone made to depict Jones tweeting insults like ‘kikes.’

Since it was “made clear” that the Tweet was fake, Breitbart is admitting that “reporter” Milo either deliberately shared a fake Tweet or Milo missed the obvious clarity — wrongdoing or incompetence.

RISK TO THE FREE SPEECH OF WIKILEAKS

In a side conversation, user @kadybat noted, “Keep in mind that WikiLeaks is defending someone who has consistently insulted Chelsea Manning in his reporting.” Chelsea Manning, formerly known as Bradley Manning, was responsible for releasing the notorious video of “collateral murder.” For this leak, Manning received a 35-year prison sentence. WikiLeaks supported Manning.

WikiLeaks responded, “We’re not defending @Nero. We’re defending ourselves. If @Twitter is a place of censorship @WikiLeaks will be censored.”

This is precisely why Twitter needs to implement some sort of transparent standards, equally applied, with some form of due process when users are suspended. If it turns out that Milo was suspended for his fraudulent Tweet, WikiLeaks has nothing to fear.