The special prosecutor Robert Mueller released an indictment of 13 Russian individuals and three Russian organizations. The allegations include a Russian controlled Twitter account with over one hundred thousand followers masquerading as the Tennessee GOP, with user name @TEN_GOP. From paragraph 36 of the Indictment:

Our stance regarding the Twitter account impersonating the #TNGOP has not changed. Our staff reported the account multiple times and have willingly provided those records to media when inquired. 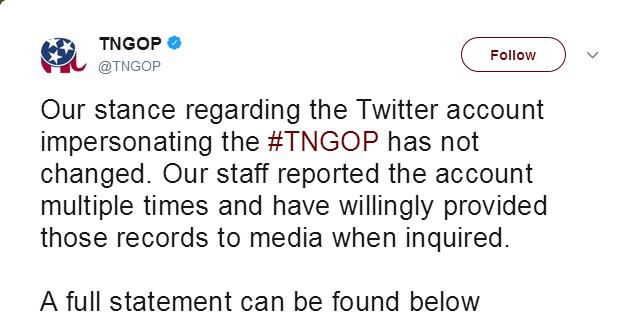 The Tennessee GOP reported the fraud to Twitter privately. Republicans did not take a public “stance” on the issue until news of the indictment broke. In that respect, the GOP “stance” on the account has changed. Now that the election is over, and now that the account has been shown to be fake, the Tennessee GOP finally issues a public statement — something that could have been done any time.

According to the indictment, the fake @TEN_GOP account was active in the summer before the election, posting allegations of voter fraud by the Hillary Clinton campaign and similar items. The Tennessee GOP said nothing.

A major organization such as the most powerful political party of a state has available tools to disrupt such a fraud. For example, these authorities could have reported the fake account to themselves and used the full power of the state to force removal of the account. Even without such power, the least the Tennessee GOP should have done was to go public and denounce the account, making sure such confusion about its ownership would be minimized. The official account could even have responded directly to the Tweets of the fraud account.

But the Tennessee Republican Party did nothing except complain secretly to Twitter. Now, the state party is trying to pass all the blame to Twitter.

A number of replies to the official Tennessee GOP announcement were not buying the story:

What’s appalling is how little you did to alert the authorities to this pernicious imposter. Can you produce a record of ANY of your complaints to Twitter? Or did you just sit back, marvel at TEN_GOP’s follower count and happily play along?

So you say you reported it to Twitter, and when Twitter did nothing you stopped. As long as TEN_GOP was beneficial to your cause and had hundreds of thousands of followers, you never considered taking the matter higher.

When the president’s son and campaign manager were retweeting information from that account, why didn’t you publicly say anything?

The Tennessee GOP Chairman is Scott Golden, pictured above, promised “greater transparency” when he won a close party election in December of 2016.

Attached to the Tweet is a more detailed statement:

“As such, the Tennessee Republican Party, on multiple occasions, filed official reports with Twitter regarding the @TEN_GOP account. Each report was either dismissed by Twitter or never responded to. It is deeply disappointing knowing the true intentions and the depth of deception this account was created for, and that despite our multiple attempts to have the account suspended by Twitter, it remained active on the social media’s website.

“It is our hope that Twitter, and other social media websites, enforce stricter verification rules, and take more seriously the impersonation of political parties, organizations, and candidates in the future.”

Documentation of reports to Twitter and their response are available to the media upon request.

The poor, helpless Tennessee GOP could not do anything about the big bad Twitter account, except complain privately to Twitter and request — directly against Republican ideology — that they regulate more.