MAPS UPDATED MARCH 8. On Super Tuesday, 11 states had primaries or caucuses for each of the two main parties. Front-runners emerged. For the Democrats, Hillary Clinton is leading. For Republicans, Donald Trump is ahead. Candidates were assigned colors. Colors were mixed in the exact percentages of the voter totals for each contest to date for visual comparison. Each state was colored according to the mix.

The more red a state is, the better Hillary Clinton did.  The more blue, the better Bernie Sanders did. The purest purple is a tie, with Iowa being the closest example.

See the updated story with a two-man color map here 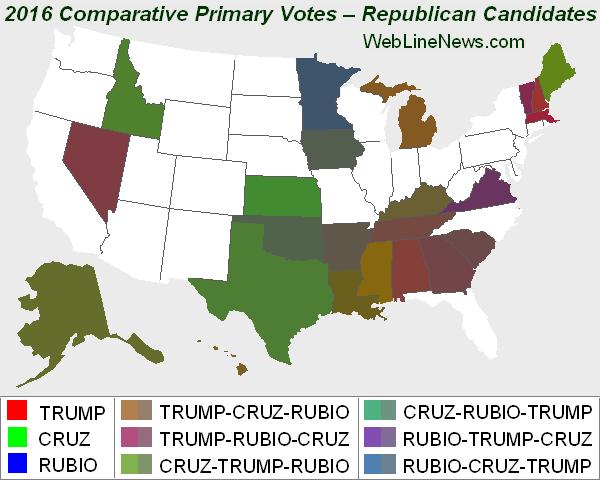 See the guide at the bottom of the chart. The color boxes represent what would be seen where the candidates came in first, second and third respectively. There are two shades. The shade to the left is a blowout win. The shade to the right is a more balanced race.

The map is full of shades of brown which indicate how well Donald Trump is doing. As brown turns more purple, Marco Rubio is more competitive. As the color heads toward green, Ted Cruz does better. Ted Cruz won the greenest states. Finally, as the color turns toward blue, Marco Rubio is strong. Marco Rubio won only Minnesota to date.

While Ben Carson has announced that he will not appear at the next debate, John Kasich has not been counted out.  This map will be revisited after more primaries.