In 1983, major changes were made to make Social Security (SSA) able to meet its full obligations for 75 years. Once a year since then, the “trustees” have issued an actuarial document called the Trustees Report where the numbers were crunched and a new 75-year estimate of “actuarial balance” would come out. In reality, except for 1983 itself, the numbers were always deficits.

For this, much has been said about “fixing” Social Security or eliminating the program as too expensive. Some have called it a “ponzi scheme” and insisted that the program be eliminated. Many have attached SSA to the deficit and claimed that the money has all been spent. None of these things are true.

This report will show that SSA predictions have been extremely accurate and that the current deficit is still greatly exaggerated. We will go step-by-step, showing mathematically that estimates from way back in 1983 have been amazingly accurate.

WHAT CAUSES CHANGES IN ESTIMATES?

There are three items that may change the 75-year estimate from year-to-year.

HOW GOOD HAVE ESTIMATES BEEN OVER THE PAST 33 YEARS?

CHART 1. The first graph is simply the 75-year predicted deficit as a percentage of SSA taxable wages taken from each Trustees Report from 1983 through 2016. In 1983, immediately upon the enactment of the amendments, the trustees expected there to be a surplus of two one-hundreds of a percent. That would be the last year a surplus would be predicted.

In the first few years, the trend was toward larger deficits, peaking at 2.23 percent of payroll in 1997 before steadying out for many years, then slipping again. By the 2016 report, the deficit was 2.66 percent of payroll, but it had steadied out again. 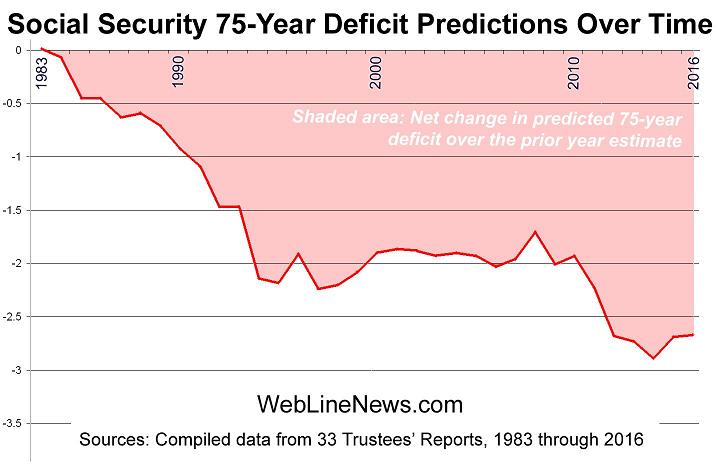 CHART 2. In calculating the 75-year deficit each year, the trustees change the valuation period. For example, in the 1983 report, the 75 years ran from 1983 through 2067, while the 2016 report ran from 2016 through 2090. By changing the valuation period, each report measures slightly different things. It was always expected that the deficit would become larger over the years. From the 1990 Trustees Report page 80:

In the absence of other changes, the long-range actuarial balance will tend to worsen slowly in future annual reports, as the valuation period moves forward and additional distant years of deficit are included in the valuation. The actuarial deficits in the later years of the 75-year projection period are caused primarily by the demographic trends described above, in combination with a flat contribution rate schedule.

The trustees calculated the expected difference for the dropping of the last year and the addition of a distant future year as the “valuation period.” For example, in the 2016 report, by dropping year 2015 and replacing it with year 2090, there was an expected increase in deficit of 0.05 percent. The yellow section added to the graph represents each valuation adjustment for each year. 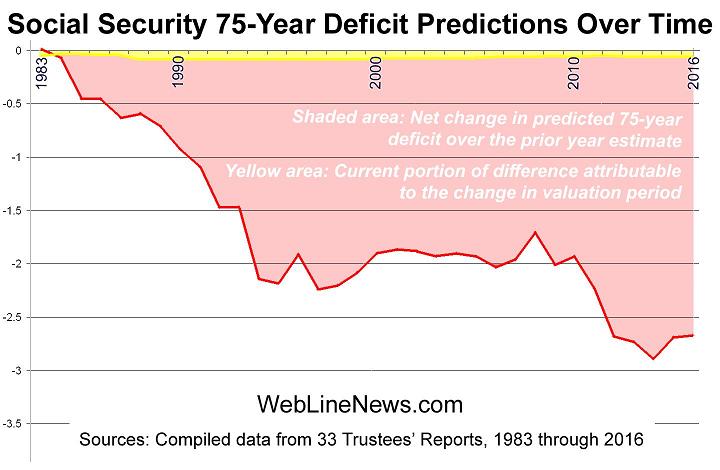 CHART 3. The “valuation period” adjustment occurs every year, and it is cumulative. By adding up each adjustment and graphing the result, it becomes obvious that changing 75-year period is the main driver of increasing deficits. In fact, most of the 2016 deficit of 2.66 percent of payroll occurred just by moving ahead in time. This moving period must be excluded when comparing predictions back in 1983 to predictions today. The shaded area represents the net change in the deficit after eliminating the “valuation period” to revert back to what was expected in 1983 and make it comparable. 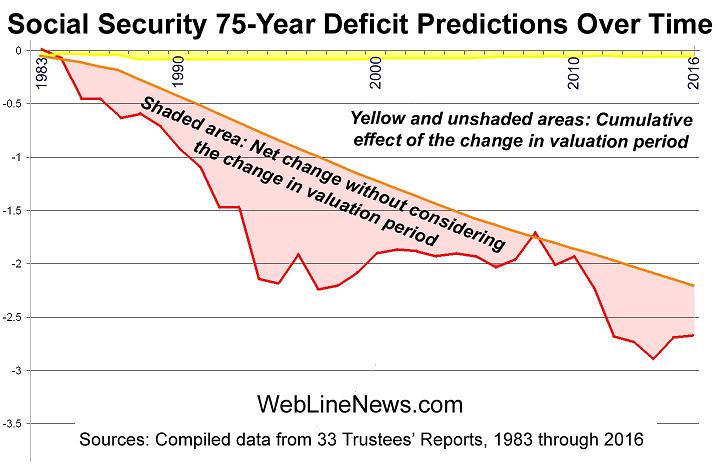 CHART 4. By subtracting the cumulative valuation period adjustment from the predicted deficit each year, the graph becomes simpler to understand. Now we can see that the cumulative expected surplus of 0.02 percent by 1983 standards became a deficit of 0.46 percent in 2016 — or less than half a percentage point different after so much else that occurred. 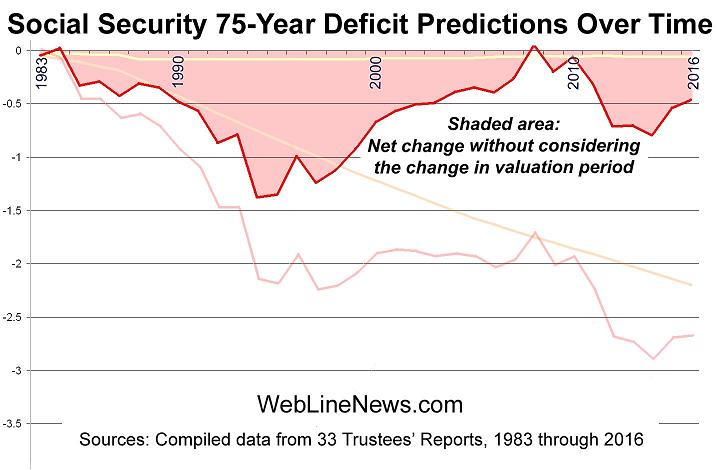 But this is merely theoretical. It is 2016 and the projected deficit is 2.66 percent.

Instead of starting at the beginning and moving forward to find that after 33 of 75 years, the accuracy was within half a percent, the calculations should run backward from the present.

CHART 5. This time, start at the end in 2016 and subtract the valuation period adjustment backward to 1983. It’s the same process. The yellow annual valuation adjustment is at the top. The cumulative valuation adjustment comes up to zero at the present and the original numbers get pushed down to simulate the 2016 through 2090 deficit by 1983 standards, and for each year following.

Now we can see that the cumulative expected deficit of 2.66 percent by 2016 standards would have been a 2.12 percent deficit in 1983 — or just over half a percentage point different for all that occurred. 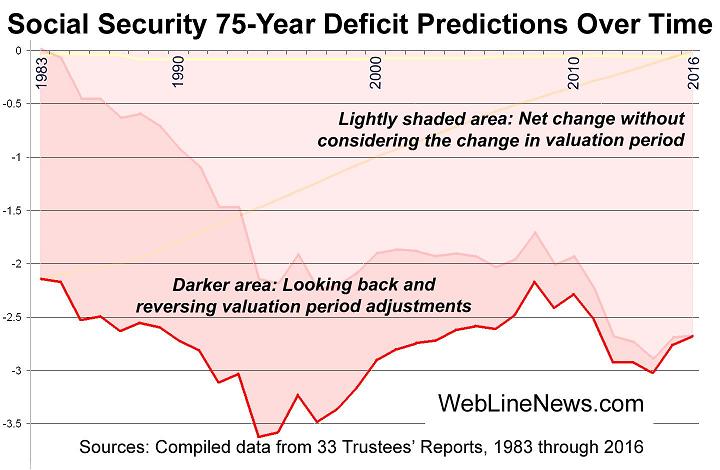 CHART 6. Finally, we need to make one more key adjustment. The 2.66 percent deficit for the next 75 years from 2016 through 2090 is a percentage of SSA payroll. But Social Security is predicting that SSA payroll will be only one-third of income of Gross Domestic Product (GDP) in future years.

If we are really going to look at whether changes to maintain fully-promised retirement and disability benefits to tens of millions of people are possible, we ought to look at all of GDP income.

By multiplying the SSA deficit by 33 percent, we convert it to a percentage of GDP. In the recent past — years 1984 through 2015 — SSA payroll has averaged 37 percent of GDP, with SSA payroll dropping to under 36 percent in the most recent three years.

Chart 6 uses the 37 percent number. This higher number is less favorable to the long range deficit forecast than the SSA 33 percent number, but it may be more accurate given history. 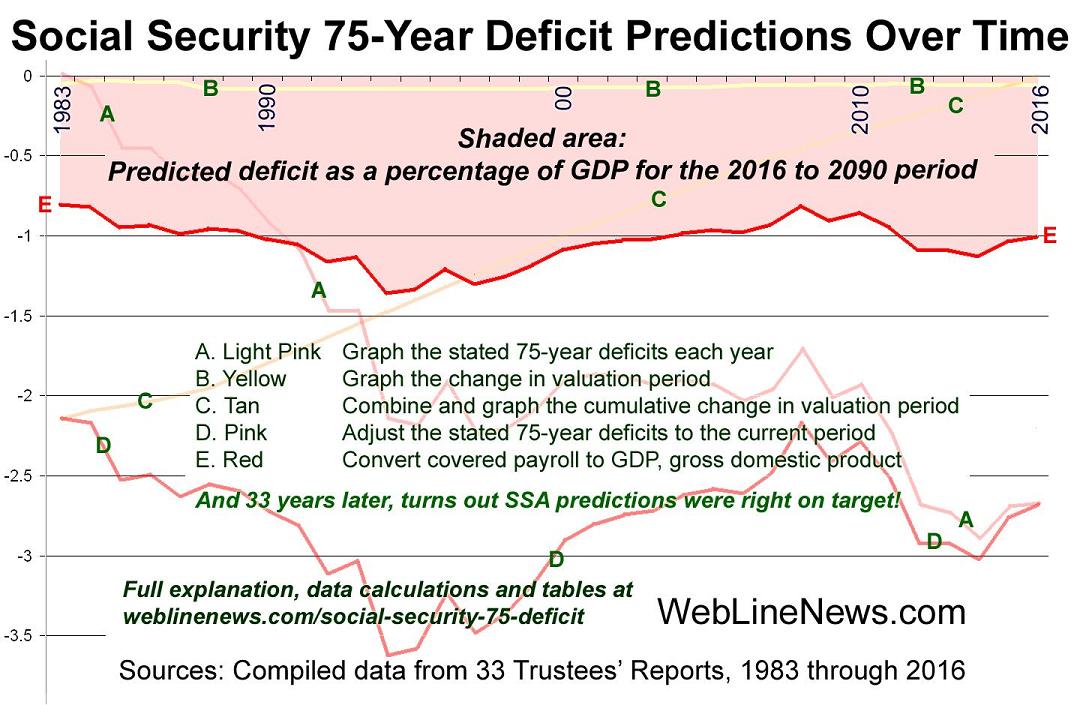 The final result is the 75-year deficit prediction for years 2016 through 2090.  In 1983 terms that deficit would have been 0.78 percent while the actual 75-deficit estimate for the same period is now 0.98 percent — still under one percent. That is the cumulative adjustment for most everything that the trustees considered. 33 years out, that is quite a crystal ball. Right on target!

To save Social Security, we only have to find a penny for every dollar in the economy. For that small price, we can protect our seniors and ourselves in the coming years.