Under this ideology, corporations may dictate their own religious rules to employees and customers — under threat of taking away jobs or refusing service. Corporations become the main form of governance over people.

The government should know automatically — magically — and assume corporations are exempt from any and every law that could possibly be religiously objectionable. This is about as logical as the worst partisan memes on Twitter, but it passes as legal analysis for Neil Gorsuch and quite a few other Republicans on federal courts.

CORPORATE THEOCRACY AT THE DOORSTEP

All of the individual legal rules necessary to arrive at this end game of corporate theocracy are already in place or underway. When combined, the recent 5-4 rulings in Supreme Court cases Hobby Lobby and Citizens United plus a ruling that would please Neil Gorsuch in the pending case Little Sisters (aka Zubik) equals corporate theocracy.

First, in the notorious case of Hobby Lobby, a privately held business corporation was granted Constitutional religious rights. Because the owners of the company claimed a religious view, the company was exempted from providing mandated health benefits to its employees. A polarized 5-4 Supreme Court decided the case, upholding a Neil Gorsuch decision. Details are in an earlier report.

The third case — Little Sisters — is in the courts now. This case has been around long enough to show the hand of Neil Gorsuch. 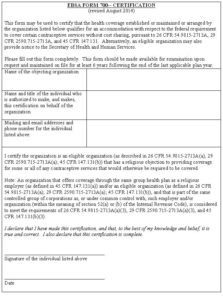 Under federal health laws, employers are required to provide birth control benefits to their employees or face noncompliance penalties. Religious affiliated organizations may gain exemption from requirements by filing a simple form with the government. Once the form is submitted, these organizations do not have to provide birth control coverage and they cannot be fined for violating the law. (Click form image to enlarge)

Little Sisters of the Poor and others including religious universities (“the organizations”) sued the government to object to the exemption form. They argued that filling out a form to exempt them from the requirement makes them complicit in assisting the government to obtain coverage for the employees elsewhere. They also argued that filling out the accommodation form would be a “substantial burden” upon them.

The organizations asked for a temporary court order blocking the government from requiring the form. The first panel of the appeals court rejected the order:

If the plaintiffs wish to avail themselves of a legal means–an accommodation–to be excused from compliance with a law, they cannot rely on the possibility of their violating the very same law to challenge the accommodation. (55-56) … Opting out sends the unambiguous message that they oppose contraceptive coverage and refuse to provide it, and does not foreclose them from objecting both to contraception and the Mandate in the strongest possible terms… Plaintiffs’ only involvement in the scheme is the act of opting out. Plaintiffs are not substantially burdened solely by the de minimis administrative tasks this involves. All opt-out schemes require some affirmative act to free objectors from the obligations they would otherwise face. (66-68, emphasis in original)

The organizations lost. The main basis for the court’s decision was the Religious Freedom Restoration Act (RFRA). RFRA was a noncontroversial act that was passed to protect the religious practices of people who “ingested peyote for sacramental purposes.” Over time, RFRA application strayed far from its original purpose. Since the 2010 Citizens United case granted Constitutional personhood to corporations, the RFRA law has been applied to corporations.

The organizations also tried to argue First Amendment free exercise of religion and freedom of speech. They lost on those issues too.

NEIL GORSUCH DISAGREES WITH THE COURT

The case then moved to the full panel of the appeals court, which refused to look at it again. Some appeals court judges dissented. Neil Gorsuch signed on to the dissenting opinion:

Fortunately, the doctrine of the panel majority will not long survive. It is contrary to all precedent concerning the free exercise of religion. I am aware of no precedent holding that a person’s free exercise was not substantially burdened when a significant penalty was imposed for refusing to do something prohibited by the person’s sincere religious beliefs (however strange, or even silly, the court may consider those beliefs). (3)

Breaking down this paragraph:

Fortunately, the doctrine of the panel majority will not long survive.

Neil Gorsuch expects this ruling to be overturned. He seems to know something about the future.

It is contrary to all precedent concerning the free exercise of religion. I am aware of no precedent holding that …

The appeals court looked at many precedents. The decision is loaded with them. Neil Gorsuch supposedly believes they are all wrong.

… (however strange, or even silly, the court may consider those beliefs).

A “strange, or even silly” religious belief could be literally anything — giving organizations unlimited power to be exempt from laws.

The Little Sisters case was appealed to the Supreme Court. It was consolidated with other cases and became Zubik v. Burwell. The evenly divided 4-4 Supreme Court fooled around with changing the question, then suddenly decided to send the case back down to the lower courts on a side issue. It never decided the ultimate questions. The case may return to the Supreme Court again. Neil Gorsuch may be on the bench by then.

PUTTING IT ALL TOGETHER

Using simple logic, the combined effects of the three cases Hobby Lobby, Citizens United, and Little Sisters, would place all corporations above the law. If Neil Gorsuch ultimately casts a deciding vote at the Supreme Court on the Little Sisters case, or on another similar case, all these three things would follow.

FIRST, religious rights would apply to all organizations:

SECOND, corporations would be able to claim exemption from any law under Little Sisters:

With this test, corporations could gain exemptions from all taxes and regulations, including minimum wages, working hours and safety, participation in benefits programs, nondiscrimination laws — anything that can be declared a religious view — literally anything. Corporations could also require religious allegiance or compliance of workers. (Exemptions like these may also be applied to customers.)

THIRD, corporations would have the ability to immediately and totally ignore any law without notice to anyone, under Little Sisters.

FOURTH, over time, corporate theocracy would be enforced through economics.

The first three of these items would happen immediately by simply combining the three cases. Nothing more is needed. The economic effects of the fourth one would occur over time.

Both the Hobby Lobby and Little Sisters cases are based mainly upon the Religious Freedom Restoration Act (RFRA). They are not primarily based upon the Constitution itself. Modifying the RFRA law to take out unintended corporate personhood protection may go a long way to prevent or reverse the corporate theocracy in these cases.

However, it would not prevent the general trend. By showing his hand with the Little Sisters case, Neil Gorsuch has made it clear that he will do whatever he can to create corporate theocracy.

The Constitution requires the Senate to provide “advice and consent” to Supreme Court nominees. But last year, Republican Senators created a novel interpretation of the provision. They said that the Senate would not provide any “advice and consent” in an election year even where a popularly elected president nominates someone for the Supreme Court before the election. This has never happened before. Adding all those interpretive words and new constraints to the Constitution must be considered “judicial activism.”

Nevertheless, Neil Gorsuch accepted the nomination. Despite the notion that he is a “conservative” and an “originalist,” the fact that he would accept such a nomination under these circumstances indicates that he has no problem with “judicial activism” where the ends justify the means.

Neil Gorsuch is not fit to sit on the Supreme Court.