An audio recording of veteran reporter Seymour Hersh appeared online Tuesday. Seymour Hersh has an inside source at the FBI who told him of a report indicating that deceased DNC staffer Seth Rich contacted WikiLeaks from his computer about the “DNC Leaks.”

The audio recording was posted to account “DeBunking Rod Wheeler,” and promoted by WikiLeaks to counter a bombshell lawsuit claiming that the White House was involved in approving a later retracted Fox News story. The audio post appears to be the work of banker and Republican operative of Benghazi notoriety, Ed Butowsky, who edited the recordings for partisan purposes.

“Mainstream media,” often referred to as MSM, ignores the details of the Seymour Hersh audio recording, simply accepting his response that it is all about “gossip.” MSM has a history of criticizing Seymour Hersh, so it is no wonder that there would be no further inquiry. Nevertheless, MSM silence opens the door for the “narrative” to be dominated by the alternative media (as usual). 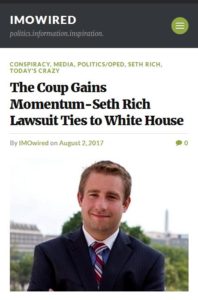 In the “independent” media, legitimate questions arise, chief among them — demands for Seymour Hersh to explain the recording.

While the whole purpose of Republican partisan sites is to promote or defend the Republican Party and attack or ridicule the Democratic Party for political gain, independent sites should know better. Unfortunately, too many do not. Some of these “independent” sites may not be very independent. Too many of the alternative reports jump to overarching conclusions that do not follow.

There are two people right now who could confirm or deny whether Seth Rich was the source of the DNC Leaks:

Those who are demanding answers from Seymour Hersh are right to do so too. Regardless, more information is coming, and we need not jump to big conclusions that do not follow.

The internet is filling with stories by so-called reporters or bloggers proclaiming headlines or content declaring conclusions including:

1. The statements by Seymour Hersh are confirmation,
2. Seth Rich provided the DNC files to WikiLeaks,
3. Claims of Russia hacking the DNC are debunked, and
4. The entire “Russia-gate narrative” is debunked.

July 10, 2016, Seth Rich was killed in a “botched robbery” according to police. Seth Rich had been working for the DNC. The case is not solved. Since then, many stories have popped up claiming that the DNC killed Seth Rich because he was the source for the “DNC Leaks” revealed by WikiLeaks.

May 15, 2017, Monday, a local Fox News affiliate publishes a report with a quote from Fox News contributor and private investigator Rod Wheeler. The quote is verified the next day in a television interview:

“I have a source inside the police department that has looked at me straight in the eye and said, ‘Rod, we were told to stand down on this case and I can’t share any information with you.’ Now, that is highly unusual for a murder investigation, especially from a police department. Again, I don’t think it comes from the chief’s office, but I do believe there is a correlation between the mayor’s office and the DNC and that is the information that will come out [Tuesday]. (Brackets in original)

May 16, the national Fox News network picks up the story online, with this additional quote:

“My investigation up to this point shows there was some degree of email exchange between Seth Rich and WikiLeaks,” Wheeler said. “I do believe that the answers to who murdered Seth Rich sits on his computer on a shelf at the DC police or FBI headquarters.”

The local affiliate updates the story to provide “an important clarification” claiming that Rod Wheeler “backtracked.” There is video of Rod Wheeler answering the question, “You have sources at the FBI saying that there is information?” His answer, “Absolutely. Yeah. That’s confirmed.”

May 23, the national Fox News network deletes the story and issues a statement:

On May 16, a story was posted on the Fox News website on the investigation into the 2016 murder of DNC staffer Seth Rich. The article was not initially subjected to the high degree of editorial scrutiny we require for all our reporting. Upon appropriate review, the article was found not to meet those standards and has since been removed. We will continue to investigate this story and will provide updates as warranted.

The Seymour Hersh audio recording was posted to YouTube weeks in advance of a lawsuit where Fox News contributor Rod Wheeler sued the network for making up quotes. Rod Wheeler seeks defamation damages from the company for harming his reputation. This is the legal story.

Read the entire Complaint for yourself here.

55. During his conversation with Butowsky, Mr. Hersh claimed that he had received information from an “FBI report.” Mr. Hersh had not seen the report himself, but explained: “I have somebody on the inside who will go and read a file for me. And I know this person is unbelievably accurate and careful. He’s a very high level guy.”

56. According to Mr. Hersh, his source told him that the FBI report states that, shortly after Seth Rich’s murder, the D.C. police obtained a warrant to search his home. When they arrived at the home, the D.C. police found Seth Rich’s computer, but were unable to access it. The computer was then provided to the D.C. police Cyber Unit, who also were unable to access the computer. At that point, the D.C. police contacted the Cyber Unit at the FBI’s Washington D.C. field office. Again, according to the supposed FBI report, the Washington D.C. field office was able to get into the computer and found that in “late spring early summer [2016], [Seth Rich][made] contact with Wikileaks.” “They found what he had done. He had submitted a series of documents, of emails. Some juicy emails from the DNC.” Mr. Hersh told Butowsky that Seth Rich “offered a sample [to WikiLeaks][,] an extensive sample, you know I’m sure dozens, of emails, and said I want money.” (Brackets in original)

Butowsky says he became convinced that the FBI had a report concluding that Seth Rich’s laptop showed he had had contacts with WikiLeaks after speaking to the legendary reporter Seymour Hersh, who was also investigating Rich’s death. According to the transcripts in the lawsuit, Butowsky says Hersh had an FBI source who confirmed the report. In an interview this week, Hersh sounds unconvinced. “I hear gossip,” Hersh tells NPR on Monday. “[Butowsky] took two and two and made 45 out of it.”

The NPR story also notes that Fox News reported an “anonymous federal investigator who said an FBI investigation found that Rich had been in contact with Gavin MacFadyen.”

Questioned about the NPR report, Sarah Huckabee Sanders says, “The president had no knowledge of the story [pre-publication].” She dismisses further questions: “It’s ongoing litigation that doesn’t involve anybody in the building.” Hours later, WikiLeaks promotes the prepared recordings that were posted to YouTube weeks earlier. Ed Butowsky deletes his Twitter account.

Finally, on the same day, Christopher Wray is confirmed to become the new FBI Director, following a June 7 nomination. 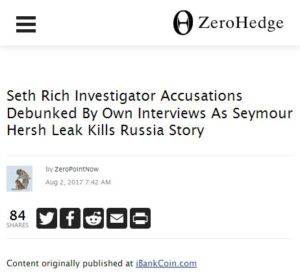 Four critical conclusions assumed to follow the release of the Seymour Hersh audio recordings do not follow from the recordings or the related facts. This is not to say with certainly that these conclusions are independently false. Based on the data presented, we don’t know for sure.

Articles that begin with facts from the Seymour Hersh audio recordings and the lawsuit should not leap to these four conclusions. But many do. Here are their conclusions and explanations why they are wrong.

The first unproven leap by the “journalists” is to believe that Seymour Hersh statements are confirmation that Seth Rich was the source of the DNC Leaks. The argument goes like this:

This conclusion is false because: 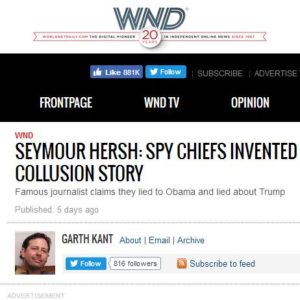 Proper Conclusion: It is possible that the information Seymour Hersh discussed in the recording is true, but not proven. Full recordings are needed — not just “debunking” edits from one partisan side. More investigation is needed, and more will come out.

Independently, it appears that WikiLeaks and Julian Assange can resolve the source mystery any time they feel like it, but it looks like they are fooling around with the issue:

Any day now, Julian Assange can confirm or deny that Seth Rich was the source of the DNC Leaks. All he needs to do is say it.

Conclusion 3. CLAIMS OF RUSSIA HACKING THE DNC ARE DEBUNKED. 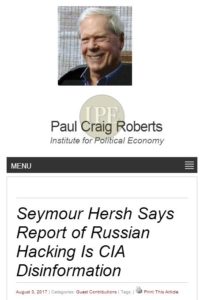 This leap builds upon incorrect Conclusion 1 above. But pretend for a moment that statements by Seymour Hersh are all correct, that there is an FBI report indicating Seth Rich was in touch with WikiLeaks, and that he provided the DNC Leaks to the organization…

There is still a huge problem. Seth Rich leaking the information cannot preclude Russia from hacking it too. Both things can happen independently. This conclusion is impossible. It does not follow at all. The Complaint itself makes this point in paragraph 57:

57… Mr. Hersh cautioned Butowski that the information … even if true, it did not preclude the possibility that that the Russians also hacked the DNC.

Incredibly, some reporters and bloggers leap to the conclusion that Russia did not hack the DNC, even after being handed the proper logic through the Complaint. Some even publish paragraphs 55 and 56, and ignore 57.

Those who insist that the entire “Russia-gate narrative” is debunked by Seymour Hersh need not wonder why most people don’t take them seriously. After leaping through the three conclusions above, this one is completely off the radar — the most impossible of all. 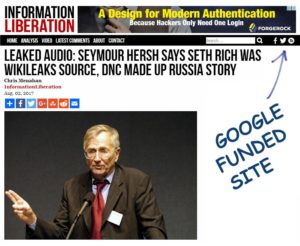 Whether Seth Rich is the source of DNC Leaks and whether Seth Rich is part of the “Clinton body count” or not, other comments Seymour Hersh makes about ‘Russia-gate’ are merely his opinions about people or about “hacking.” They do not cover all alleged Russian connections.

Before the election, information about Russian collusion was very weak, as illustrated in this report. That was then. Today, information suggesting Donald Trump and other Republicans were working with Russian operatives is growing.

OTHER CONSPIRACIES NOT YET DEBUNKED

While we are drawing conclusions that do not follow from the facts, here are two related story ideas for great internet journalists:

Russians, Republicans or WikiLeaks killed Seth Rich to pin it on Democrats and add to the ‘Clinton body count’ for political purposes just before the 2016 election.

These are as good as others. Post links to your stories in the comments …