It was a busy week for the Dakota Access Pipeline. The main event: In a stunning reversal of position, the Justice Department called for a halt to construction Friday, right after a federal judge refused to order an emergency injunction to stop it. (featured picture: Democracy Now)

This was a crazy week surrounding the construction of the Dakota Access Pipeline. Here is what happened:

The Standing Rock tribe sued the Army Corps to stop the pipeline, as it cuts through land allegedly taken from the tribe and there may be burial grounds in or near the path and other sacred sites. Also, it goes through the Lake Oahe area and may risk the water supply. Construction actually continued while awaiting an answer, even during the Memorial Day holiday weekend.

Tuesday: State of North Dakota permits “non-lethal” weaponized drones for enforcement. The law reads, “A law enforcement agency may not authorize the use of, including granting a permit to use, an unmanned aerial vehicle armed with any lethal weapons.” In other words, so-called non-lethal weapons are allowed. An article at website Steemit explains:

The original bill as it was written was designed to limit the use of drones for surveillance and intelligence-gathering… [and] to ensure that drones couldn’t be used for surveillance without a warrant.

But the North Dakota Peace Officer’s Association was allowed to change the language. The site continues with two questions:

So where does that leave private citizens not wanting to be electrocuted in the ass while minding their own goddamn business? Worse yet, what’s going to happen at the North Dakota Pipeline protests now that this law is on the books?

Court records show [Jill] Stein was charged Wednesday in Morton County with misdemeanor counts of criminal trespass and criminal mischief. The same charges have been filed against her running mate, Ajamu Baraka. 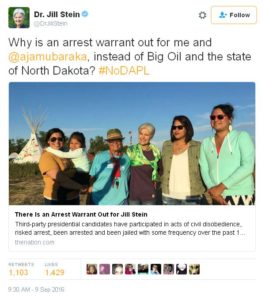 Jill Stein responds on Twitter, “Why is an arrest warrant out for me and @ajamubaraka, instead of Big Oil and the state of North Dakota? #NoDAPL [Dakota Access Pipeline].”

TELEVISION AVOIDS COVERAGE OF THE PIPELINE 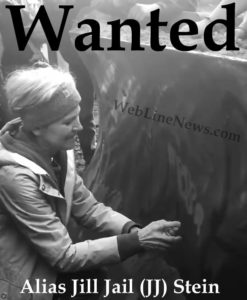 Wednesday: A Fair.org comprehensive review of the three broadcast television networks finds that they “have aired exactly one report on the Dakota Access Pipeline protests … since April.” The one report was on CBS at four in the morning. It was 48 words.

Despite the lack of TV coverage, protestors and internet coverage has reached a critical peak where the press and the national government can no longer ignore the pipeline controversy. This pipeline may be on its way to becoming the next Keystone Pipeline, which was finally abandoned after high-profile coverage. Read on.

The Secretary shall not grant an easement for the Lake Oahe crossing for the Dakota Access Pipeline until the date on which an environmental impact statement with respect to the easement is completed.

Friday: In the federal case Standing Rock Sioux Tribe v. US Army Corps of Engineers, the Sioux Tribe wants a preliminary injunction to stop the construction because it risked “irreparable harm.” The court said no [PDF]:

The Tribe fears that construction of the pipeline, which runs within half a mile of its reservation in North and South Dakota, will destroy sites of cultural and historical significance. It has now filed a Motion for Preliminary Injunction, asserting principally that the Corps flouted its duty to engage in tribal consultations under the National Historic Preservation Act (NHPA) and that irreparable harm will ensue. After digging through a substantial record on an expedited basis, the Court cannot concur. It concludes that the Corps has likely complied with the NHPA and that the Tribe has not shown it will suffer injury that would be prevented by any injunction the Court could issue. The Motion will thus be denied.

Friday, minutes after the court decision came down, the Justice Department releases a surprising statement. Here is most of it.

“We appreciate the District Court’s opinion on the U.S. Army Corps of Engineers’ compliance with the National Historic Preservation Act. However, important issues raised by the Standing Rock Sioux Tribe and other tribal nations and their members regarding the Dakota Access pipeline specifically, and pipeline-related decision-making generally, remain. Therefore, the Department of the Army, the Department of Justice, and the Department of the Interior will take the following steps.

The Army will not authorize constructing the Dakota Access pipeline on Corps land bordering or under Lake Oahe until it can determine whether it will need to reconsider any of its previous decisions … Therefore, construction of the pipeline on Army Corps land bordering or under Lake Oahe will not go forward at this time. The Army will move expeditiously to make this determination … In the interim, we request that the pipeline company voluntarily pause all construction activity within 20 miles east or west of Lake Oahe.

“Furthermore, this case has highlighted the need for a serious discussion on whether there should be nationwide reform with respect to considering tribes’ views on these types of infrastructure projects. Therefore, this fall, we will invite tribes to formal, government-to-government consultations on two questions: (1) within the existing statutory framework, what should the federal government do to better ensure meaningful tribal input into infrastructure-related reviews and decisions and the protection of tribal lands, resources, and treaty rights; and (2) should new legislation be proposed to Congress to alter that statutory framework and promote those goals.

“Finally, we fully support the rights of all Americans to assemble and speak freely. We urge everyone involved in protest or pipeline activities to adhere to the principles of nonviolence…

“In recent days, we have seen thousands of demonstrators come together peacefully, with support from scores of sovereign tribal governments, to exercise their First Amendment rights and to voice heartfelt concerns about the environment and historic, sacred sites. It is now incumbent on all of us to develop a path forward that serves the broadest public interest.”

Saturday: North Dakota presses on with more intimidation anyway. Journalist Amy Goodman faces arrest warrant for reporting from the scene. From the Democracy Now website where she reports:

An arrest warrant has been issued in North Dakota for Democracy Now! host and executive producer Amy Goodman. Goodman was charged with criminal trespassing, a misdemeanor offense…

“This is an unacceptable violation of freedom of the press,” said Amy Goodman in a statement. “I was doing my job by covering pipeline guards unleashing dogs and pepper spray on Native American protesters.”