After consultation with my Generals and military experts, please be advised that the United States Government will not accept or allow Transgender individuals to serve in any capacity in the U.S. Military. Our military must be focused on decisive and overwhelming victory and cannot be burdened with the tremendous medical costs and disruption that transgender in the military would entail. Thank you.

Trump’s “trans out of the military” is an obvious political distraction attack. “liberals” leap on the bait and do exactly what Trump wants. Trump baits “liberals” into campaigning for more people to join the US military psychologically endorsing its growth i.e this: 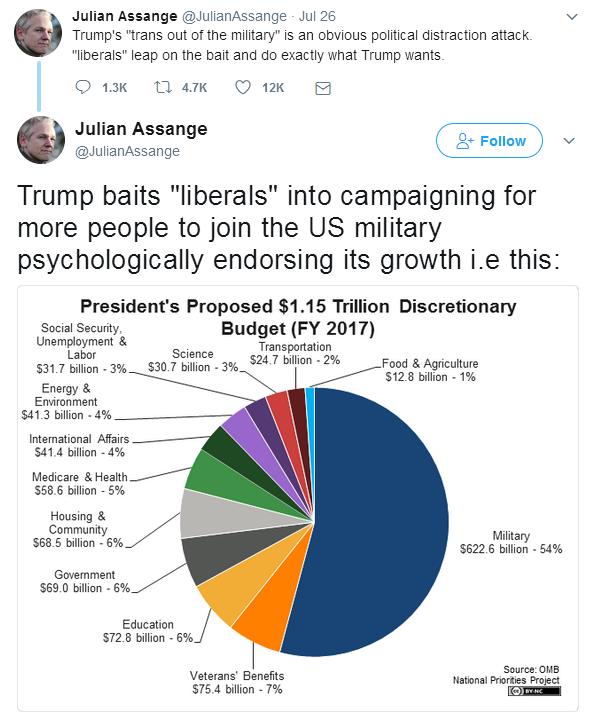 As the pie chart shows, Donald Trump proposes $622 billion dollars of direct military spending in fiscal year 2018 — an increase from 583 billion in 2017. (The pie chart is misleading, as will be explained below.)

Julian Assange believes that Donald Trump is playing a 4D chess game to sneak increased military spending into the budget while everyone is distracted about transgender rights. This is classic “wedge issue” thinking. In his mind, if only transgender people and their “liberal” supporters would lie down and lose rights, we could tackle this bloated military problem for everyone.

The problem with this notion is that most real people of minority status will not lay down and give up their rights for some urgent greater good. If there is 4D chess going on here, it is not hiding one issue with another — it is driving a wedge between constituents to induce fighting over what is more important. If anyone has fallen for Donald Trump’s 4D chess, that would be Julian Assange. But really, it is the oldest trick in the book.

DONALD TRUMP NOT AGAINST WARS

MILITARY GROWS REGARDLESS OF TRANSGENDER RIGHTS

Permitting transgenders into the military does not equal “campaigning for more people to join.” The military will run just fine with or without the small number of transgender people who choose to join. The government may tap privatized resources like those run by Donald Trump’s cohort Erik Prince or even import missionaries from other nations. One response to his tweet said that “poverty is the driving factor” for enrollment. Reduction of the military must be achieved upon its own merits and not placed on the backs of transgender people.

Julian Assange undermines his own point that there is too much military spending by using a graph which appears misleading. A number of Twitter users questioned the graph. This section explains problems with this graph then offers an alternative chart to make his point solid. (Click images to enlarge)

First, here is the graph he provided, right side. The reader may notice immediately that the title of the graph is “Discretionary Budget” — a category that does not cover the whole. Also notice that Social Security (SSA) is a tiny sliver of the graph, confounding common knowledge that SSA is one of the largest spending programs. The “$1.15 Trillion” sum comes up short, as many know the budget is well into the trillions. And where is national debt service? The pie graph does not seem right. 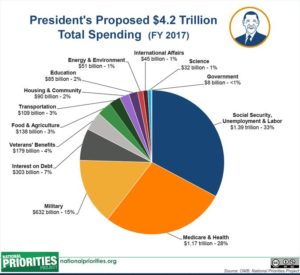 Sure enough, here is another graph from the same source, National Priorities Project, left side. This one is entitled “Total Spending” and shows “$4.2 Trillion.” Notice that direct military is only 15 percent in this graph. “Discretionary Spending” is not “Total Spending.” The discretionary spending graph above excludes nearly two thirds of all spending. 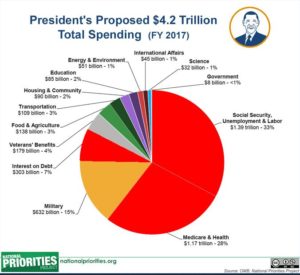 Finally, here is the same graph of “total Spending” with the missing sections colored red, right side. Now, military spending does not look so huge. In fact, it looks rather small.

To make the point that the United States spends more money than is necessary, there is a better graph at the same source, National Priorities Project. This graph leaves little room for doubt or question and shows plainly just how aggressively the United States spends on the military. This graph and the text around it cannot be discounted or ignored: 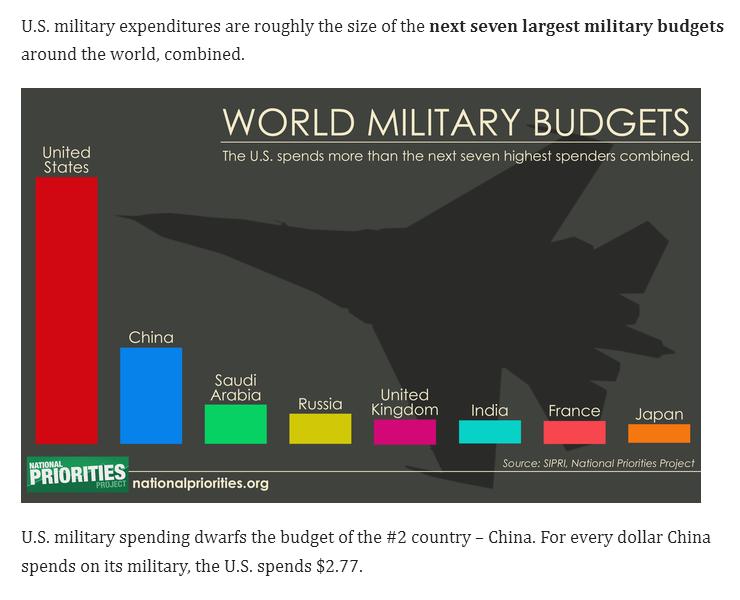