As the important New York primary becomes closer, Gallup has released a poll concerning the two main Democratic contenders in the 2016 election. Gallup finds that supporters of Hillary Clinton are more “enthusiastic” than Bernie Sanders supporters, then speculates reasons. 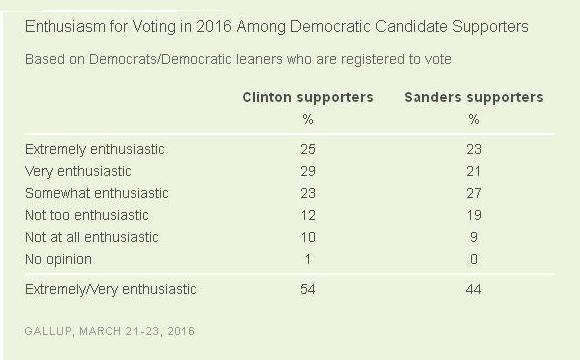 According to the Gallup article:

In both parties, people’s enthusiasm for voting in the election could reflect a combination of factors — including excitement about their preferred candidate’s presence in the race as well as confidence that the candidate will succeed in winning either the nomination or the general election. The latter could be particularly relevant on the Democratic side, where Clinton is widely seen as the likely nominee and is poised to be the first female major-party nominee. That contrasts with the Republican nomination, which remains unclear given the real likelihood that no candidate will garner the necessary number of delegates to secure the nomination before the convention.

There is a “combination” of factors to explain this poll, and Gallup promotes a few ideas to plant in our minds: Bernie Sanders supporters lack confidence. Clinton is widely seen by the press as the nominee. Hillary is a woman. (Hint: anyone who will not support this particular woman because of her views may have issues with women generally.)

The Gallup paragraph above is little more than speculation. As a polling organization, Gallup could have considered using its service to answer these questions instead of merely pointing out questions and guesses.

The poll also found that enthusiasm for Donald Trump was high but there was no paragraph of speculation about it.

Nevertheless,  press organizations keep Gallup flowing in the money and credibility, despite its below-average levels of accuracy in polling and the speculation on top of that.

BAD COUNT OF NUMBERS INSIDE GALLUP ITSELF

In 2013, according to a whistle blower complaint, “Gallup knowingly overstated its true estimated labor hours.” In other words, Gallup lied. Gallup settled the claim for over ten million dollars. The same CEO Jim Clifton is still running the company while FEMA official Timothy Cannon pleaded guilty to helping steer contracts to Gallup from inside the government. Timothy Cannon was sentenced to a fine and probation. Despite this, Gallup polls continue to receive much publicity as if the company can be trusted.

People are asking the question, “Do you know anyone who has ever been polled by Gallup?” 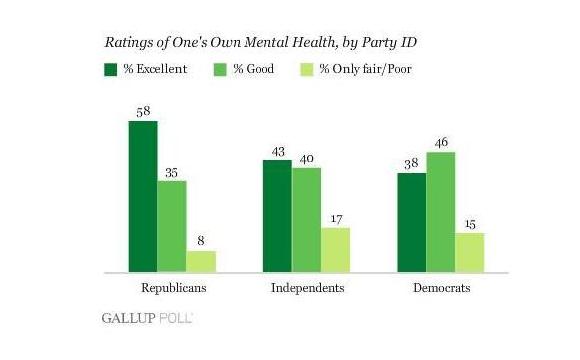 Deeper in the story, Gallup walks back the cause and effect language: “Correlation is no proof of causation, of course.” Gallup was just kidding, but most readers already put the article down.