Just as the polls are tightening in Florida for both the presidential race and the Senate race, prospective Senate Majority Leader Chuck Schumer from New York insists upon cutting funding for the Florida Senate election. Retiring Senate Minority Leader Harry Reid from Nevada wants to spend more money in the Sunshine State. 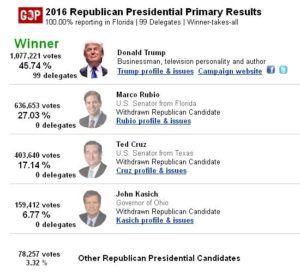 Earlier this year, Marco Rubio dropped his 2016 re-election campaign in favor of a presidential run. Throughout the Republican primaries, Marco Rubio won a single state – Minnesota. Marco Rubio could not even win his home state primary – he lost Florida to New Yorker Donald Trump 46 to 27 percent. After giving up his presidential campaign, Marco Rubio changed his mind and decided to run for Senate again.

This is not the first time that Democratic leaders have failed to back the party candidate competing against Marco Rubio. In 2010, Marco Rubio was a fairly weak “Tea Party” candidate running for an open seat. Kendrick Meeks won the Democratic primary, but rather than support its own candidate, some establishment Democrats supported the “independent” former Republican Governor Charlie Crist. Marco Rubio won the election with just under a majority of the vote against two other candidates.

The public reason that Chuck Schumer prefers to spend money on other Senate races was described by CNN.

Sen. Chuck Schumer and the Democratic Senatorial Campaign Committee are resisting calls to redirect cash into the Florida Senate race as Democrats are locked in an internal debate over how to spend limited resources into an ever-expanding map… National Democrats are privately saying they don’t have the money …

“The goal is to win back the Senate, and with limited resources and seven or eight other races that are just as close or even more likely for Democrats to win, it’s hard to find the resources for a state as big as Florida,” a source familiar with the decision-making process said.

While Schumer may have a legitimate justification, there is another way to see this.

Marco Rubio has indicated strongly that he supports the latest version of the George W. Bush war doctrine. In the primaries, he made it perfectly clear that he wants a “new American century” – precisely the words of think tanks that support the Bushes. Marco Rubio is being held in the background for another presidential run either in 2020 or 2024, with establishment Democrats helping him.

SOME DEMOCRATS ARE REPUBLICANS

War Republicans or “neocons” are rushing to distance themselves from “outsider” Republican nominee Donald Trump. Some have taken the additional step to back “third way” Democrat Hillary Clinton — most notably, Robert Kagan, one of the masterminds of the “Bush agenda.” The list is long and growing because:

That is quite a Republican resume. Colon Powell has now signed on to support her.

Chuck Schumer has quite a neocon pedigree himself. He supported the 2003 Iraq escalation. More recently, he opposed the Iran deal. Chuck Schumer was given a totally free win in his own Senate re-election campaign, as nobody put up serious competition.

On the other side, Donald Trump gained credibility by opposing wars. His primary debate attacks on Jeb Bush about Iraq are legendary. Apparently, neocons believe his anti-war rhetoric. Or do they?

Neocons may simply be reading the demographic writing on the wall – trying to save their war agenda and the Republican Party for the future by appearing to oppose what Hillary Clinton notoriously described as the “racist, sexist, homophobic, xenophobic, Islamaphobic” mindset of Donald Trump and “half” of his supporters.

Neocons have it good right now. In 2016, they are scoring points of relative moderation with women and non-white voters and building partisan credentials in the Democratic Party – while helping to save the Republican Party against a demographical time bomb.

Donald Trump claims that he opposed the 2003 Iraq war before George W. Bush went in. His record does not make this so clear. After the first presidential debate, partisan fact checkers rushed to analyze this quote:

Well, he has either got to do something or not do something, perhaps, because perhaps shouldn’t be doing it yet and perhaps we should be waiting for the United Nations, you know,” Trump said. “He’s under a lot of pressure. I think he’s doing a very good job. But, of course, if you look at the polls, a lot of people are getting a little tired. I think the Iraqi situation is a problem. And I think the economy is a much bigger problem as far as the president is concerned.

PolitiFact found this quote and others to be too vague to count as ‘against’ the invasion before it took place. Fox News broke the quote into little pieces to find a part that “backed up” Donald Trump’s claim.

While the Iraq war statement can be twisted to support partisans both ways, it is harder to play politics with this: Donald Trump promoted the Libya war emphatically.

Donald Trump said, “We should go in, we should stop this guy… Immediately go into Libya …”

UPDATE: The official video at the Trump Organization page was removed.

YET ANOTHER CONSERVATIVE POLITICAL SPECTRUM SHIFT

With these two candidates, the United States is undergoing yet another shift of the political spectrum toward the conservative side.

In 1980, the pendulum swung to conservatives when Ronald Reagan was elected president and Republicans took the Senate for the first time in 22 years. From then on, elections have been fought on the conservative side as policies by both parties became increasingly conservative. “Third way” Democrats grew out of this swing. On the Republican side, the “religious right” re-entered electoral politics to push against social rights while the well-funded libertarian movement re-branded conservative “economics.”

By 2000, with the media now consolidated more than ever before, the son of a discredited former White House occupant was able to take the White House back for a more conservative agenda – accelerating tax cuts, deregulation, and wars.

Now, it is 2016 and top Democrats are moving to fill the space that George W. Bush held while the Republican Party itself heads even further right. They call this the “alt+right,” but there is nothing “alt” about it. The alt+righters are plain old reactionary Republicans – people looking to take a trip back to the days of Joe McCarthy before all of the civil rights gains of the 1960’s and beyond. When the threats of invasion or terrorism escalate, these alt+righters will not mind the wars. Many will support or tolerate them as long as the domestic agenda goes their way.

2020 IS LOOKING GOOD FOR MARCO RUBIO

Regardless of the winner of the 2016 election, 2020 is looking good for Marco Rubio.

In a Donald Trump administration, economic policies would be profoundly more conservative with additional huge tax cuts and extended campaign funding deregulation. However, Donald Trump cannot be expected to avoid wars. Further, he could only delay the TPP – not end it.

Wars or no wars, the economic powers of elite war supporters would increase. Those powers would resume or continue pushing wars and recreate a trade deal like TPP.

There may be a backlash against Donald Trump by Republicans. Senate candidates have no problem flip-flopping to protect their own futures, and they would do so again – by blaming Donald Trump for anything that goes wrong. Then, they would run an establishment character to take the party back.

In either case, a more conservative choice is likely in 2020.

Marco Rubio could run for president again in 2020. After four years of Hillary or The Donald, Marco Rubio might look relatively good in a race against the incumbent. Political paradigm shifts further toward conservatives.

The point of this article is not to predict all of these things will happen. The point is to see this trap far in advance to spur any change of course possible over the next four years.