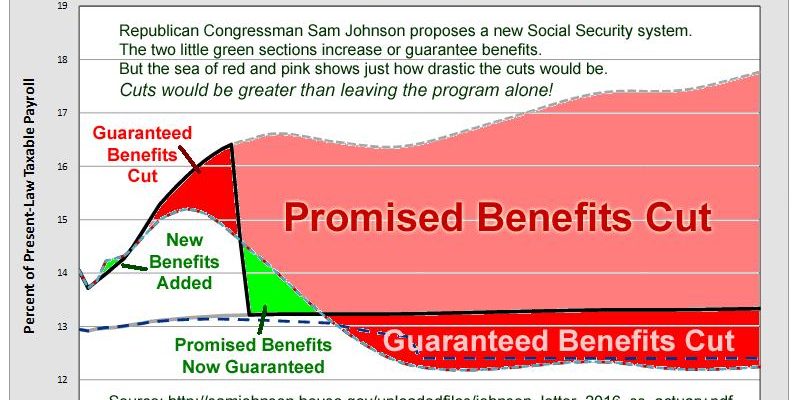 ILLUSTRATING THE CUTS IN COLOR

Social Security actuaries analyzed [PDF] the Sam Johnson proposal and created this graph. The graph illustrates the SSA benefit and funding situation as a percentage of SSA covered payroll both before and after the proposal. (This report will look at SSA as a percentage of national income below.) Web Line News has color-coded the graph to emphasize the effects of the proposed plan. 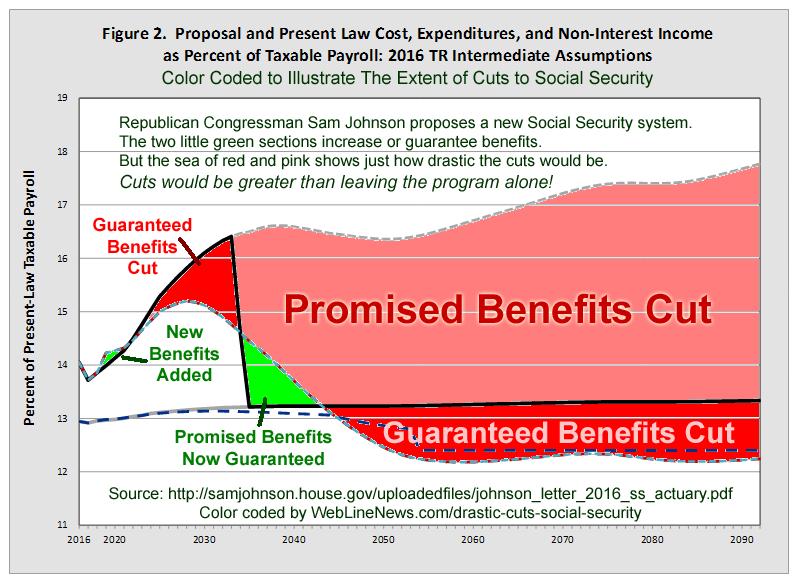 The solid black line represents guaranteed benefits under current law without changes. The line increases then drops suddenly in 2034, only to become a straight line into the future. The sudden drop is the year that SSA runs out of surplus. Then, automatic cuts occur. Under current law, benefits will be immediately reduced to about 80 percent of promised amounts and eventually to as low as 74 percent.

The tiny green triangle on the far left would increase benefits in the short-run under the plan. Some would receive more benefits in the next four years than they were ever promised. But once the 2020 election goes by, it is all down hill.

Bright red sections are cuts to guaranteed benefits. These benefits are presently guaranteed by leaving the plan alone, but would be cut by changing to the Sam Johnson plan.

The first red section, the semi-triangular shaped area to the left top of the graph, represents cuts to guaranteed benefits in the near future for current retirees and those who will retire soon.

The larger second green triangle shows where promised benefits would be guaranteed. As we can see, funding for this region comes from the red triangle preceding it.

The large pink section represents massive cuts of promised benefits for the rest of time. Nearly everything promised that was not already guaranteed would be gone. All that remains would be those front-loaded green triangles. But it gets much worse.

The second red section running under the straight line represents additional cuts beyond leaving the program alone. Not only does this plan cancel promises of Social Security benefits, it actually cuts the amount of benefits below those guaranteed.

Finally, the curvy line separating red and green sections slopes downward because the plan would phase in a new benefit formula, extending painful cuts over time like the classic “boiling frog” analogy. Eventually, it stops falling at the new lower benefit rates. 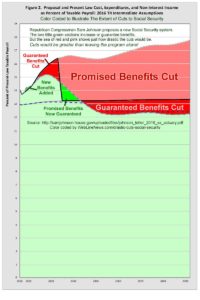 For perspective, a smaller version of the graph starting at zero is shown to cover the full picture of what would be left after these drastic cuts. The light green section shows guaranteed benefits that would remain intact after these draconian cuts.

FINAL RESULT OF THE PLAN

Under current law, benefits eventually drop to 74 percent. Under the Sam Johnson plan, benefits drop to 65 percent. In other words, the average benefit would by 91 percent of what is currently guaranteed by the end of the period once the frog has boiled.

Sam Johnson would achieve most of the additional nine percent cut of benefits through reducing taxes. The income tax upon Social Security benefits for higher income earners age is eliminated in a phase out period. Also, those who continue working full time for full pay between ages 62 and 65 may collect retirement benefits without reductions for those earnings.

Those are the very people who need the money least, but they would get tax savings while most everyone else suffers reduced benefits. As a side effect of this proposal, some older people will continue to hold jobs in the economy thereby making it harder for young people to get work.

As noted above, the average reduction to benefits by the end of the period would be 65 percent of promised benefits and nine percent of guaranteed benefits. The plan is loaded with provisions that both complicate the system and mix up the reductions so that not everyone would get the 65 percent. Cuts would not be shared equally.

An example of complication is this: there would be means-tested benefit rates for everyone. Those who earn over a certain amount of income from other sources would be subject to forfeiting cost of living allowances. SSA would now have to review income for all beneficiaries on an annual basis as long as they collect benefits.

The main example of cuts not being shared equally is this: the plan would provide a new guaranteed minimum benefit amount for some low income earners. This higher benefit would be calculated in the overall average cut of 65 percent. Mathematically, if these people get more than the 65 percent, others get less.

There would also be a hidden cost in the minimum guaranteed benefit. Low income retirees who receive more income from SSA may receive less of other benefits outside of SSA. The increase in overall income to these folks may be reduced or even entirely eliminated in many cases.

Finally, the original SSA analysis provides this graph adjusted to include national income — not just SSA taxed payroll. This looks much like the original payroll-based graph but there are a few critical differences.

See also Social Security Deficit Predictions Over Time, the Trustees Have Been Right on Target.

The red line was added to show that the total SSA deficit between promised benefits and currently guaranteed benefits at the end. By the time we get to 2090, the shortfall will be around 1.5 percent of national income. By refusing to fill that 1.5 percent shortage, all retirees and other beneficiaries will suffer. Benefits will drop to about 74 percent of what was promised.

On top of that, Republican congressman Sam Johnson from Texas would cut benefits even more.