A three judge panel of a federal appeals court declared the structure of the Consumer Financial Protection Bureau (CFPB) unconstitutional and overturned a decision [PDF] requiring PHH to pay a $103 million fine for passing mortgage reinsurance business to its subsidiary. 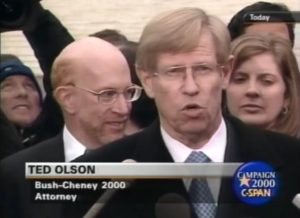 CFPB was created in the 2010 Dodd-Frank Wall Street Reform and Consumer Protection Act as a result of the 2008 “financial meltdown.” Ted Olson, a famous attorney who argued many cases including Bush v. Gore, represented PHH.

To remedy the CFPB structural issue, Ted Olson asked the court to strike down the entire Dodd-Frank act along with all its financial regulations or to at least close down the CFPB entirely.

The court fashioned a “narrow” remedy. It simply placed the director of the CFPB under control of the president, allowing the president to remove the head at any time and without cause — leaving the rest of the structure intact as Congress intended. The Constitutional issue was resolved. (Extended coverage below)

FINE AGAINST PHH BY CFPB VACATED

The court threw out the $103 million fine and sent the case back to the CFPB to work out the facts and details. The appeals court found

As the appeals court summarized:

PHH advances two alternative independent arguments on the statutory issue. First, PHH argues that the CFPB misinterpreted Section 8(c). Second, … PHH argues that the CSPB violated bedrock due process principles by retroactively applying its new interpretation of the statute against PHH. We agree with PHH on both counts. (Page 73)

The appeals court sent the case back to CFPB to determine “whether, consistent with the applicable three year statute of limitations, the relevant mortgage insurers paid more than reasonable market value to Atrium.” The fine will likely be reduced or could even be eliminated.

DETAILS AND EXCERPTS ON CONSTITUTIONAL ISSUE

The appeals court struck down the structure [PDF] of Consumer Financial Protection Bureau, an “independent agency” created after the 2008 financial collapse. The court noted that the Director of the CFPB is not answerable to anyone, not even the president. The director can only be removed for “cause.” No other agency head enjoys such sole authority:

Nobody in government other than the president has more unilateral power.

Because the [CFPB] Director alone heads the agency without Presidential supervision, and in light of the CFPB’s broad authority over the U.S. economy, the Director enjoys more unilateral power than any single member of any other independent agency… Indeed, other than the President, the Director of the CFPB is the single most powerful official in the entire United States Government, at least when measured in terms of unilateral power. That is not an overstatement… The Speaker [of the House] can pass legislation only if 218 Members agree. The [Senate Majority] Leader needs [other Senators] … The Chief Justice [of the Supreme Court] must obtain four other Justices’ votes for his or her position to prevail … (Page 25)

Therefore, the single director independent agency poses a unique “risk to individual liberty.” (Page 51) Checks on power of the CFPB are either partial or advisory. There are no real checks. (See page 28) Other single director agencies either (1) are recent developments without court precedent or (2) do not have powers to bring law enforcement actions. (See page 29)

The bottom line is that there is no settled historical practice of independent agencies headed by single Directors who possess the substantial executive authority that the Director of CFPB enjoys. (Page 34)

The court leaves the structure almost entirely intact, only placing the CFPB director under the control of the president.

As a result, the CFPB now will operate as an executive agency. The President of the United States now has the power to supervise and direct the Director of the CFPB, and may remove the Director at will at any time. (Page 69)

One of the three judges dissented from Constitutional ruling, but agreed with the court decision to vacate the fine. The violations of laws were enough to decide the case.

But my colleagues don’t stop there [at vacating the fine]. Instead, they unnecessarily reach PHH’s constitutional challenge, thereby rejecting one of the most fundamental tenets of judicial decisionmaking. With respect,… normally the Court will not decide a constitutional question if there is some other ground upon which to dispose of the case. (Citation omitted)

All three judges agreed to vacate the fine.