Frank Sinatra’s daughter and legendary performer in her own right, Nancy Sinatra has come out swinging against a CNN news story. The CNN story claims, “Nancy Sinatra is not happy Trump will use her father’s song at #inauguration.” Nancy Sinatra retorts: “That’s not true. I never said that. Why do you lie, CNN?”

CNN has since changed the headline and the story without issuing a full retraction. The new headline is, “Sinatra on Trump picking ‘My Way’: Remember the first line.” The first line of the famous song goes, “And now, the end is near.”

The article now begins with the editorial note, “This story has been updated to reflect Sinatra’s reaction.” CNN also mentioned, “Sinatra deleted her tweet regarding the song after CNN published this article.”

No actual Tweet saying “My Way’: Remember the first line” has been produced. CNN claims the Tweet was deleted. Nancy Sinatra appears to disagree.

In any case, those words do not imply that Nancy Sinatra is “not happy” about use of the song — and could just as easily imply the opposite. She could be very happy about the irony on display.

While CNN tries squirm out of its misinterpretation, Nancy Sinatra returns to opposing Donald Trump’s views. 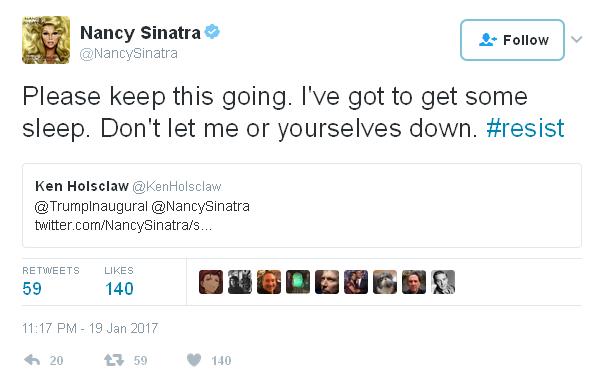