Harvard professor Thomas E. Patterson released a study of media coverage of the presidential candidates for the 2016 primary season.

The study found that coverage for each candidate was unbalanced. The study attempted to explain the imbalance, chalking nearly all of it up to the nature of the current primary system created in 1972, and the natural tendencies of journalists struggling with this system — except for one instance where he could not explain the extent of Donald Trump coverage. Ultimately, the study concluded that the media was not responsible: “Journalists cannot be faulted for the system they are required to cover.”

This review of the study will show that the media was biased in favor of Hillary Clinton and against Bernie Sanders. The numbers make a powerful case. We have since learned that bias was deliberate.

The study of the entire season from January 1 through the last primary in California was produced with data obtained by coding all of the primary coverage from “CBS, Fox, the Los Angeles Times, NBC, The New York Times, USA Today, The Wall Street Journal, and The Washington Post” over a 24-week period. Detailed data was provided for the entire period and for four periods divided up by time into four categories:

The second period, Super Tuesday, included the two-week period with both Super Tuesday and “Mini Tuesday.” This period was the most important: “No other period of the campaign had a comparable number of contests in such a short span of time.”

Primary campaign season was dominated by horse-race “winning and losing” issues, with substantive coverage at only eleven percent. Republicans received 63% of the coverage.

The report compared coverage of Donald Trump to Bernie Sanders, finding an “antithesis”:

Despite all of the data revelations, the report nevertheless refused to place any serious responsibility upon the journalists or the media entities.

Journalists cannot be faulted for the system they are required to cover. They didn’t invent America’s marathon nominating process. But the structure of the nominating process is at odds with journalists’ norms and values. This observation is not the usual complaint that the press is obsessed with the horse race. For more than a century the press has reported on who is winning and losing. What is different is that, after the nominating process was changed in the early 1970s to require states to hold a primary or caucus, the horse race was elevated to unprecedented heights.

After declaring recent changes in the primary system as the culprit, Patterson attempted to explain media bias as some sort of natural tendency.

Game-centered reporting has consequences. The media’s tendency to allocate coverage based on winning and losing affects voters’ decisions. The press’s attention to early winners, and its tendency to afford them more positive coverage than their competitors, is not designed to boost their chances, but that’s a predictable effect.

Patterson suggested that those who make decisions in the media and those who do the reporting either do not know of this “predictable effect,” or they would defy human nature to avoid pushing their biases onto others.

Marking up the above graph figure, there appears to be more than just natural journalistic tendencies and inherent biases at work. 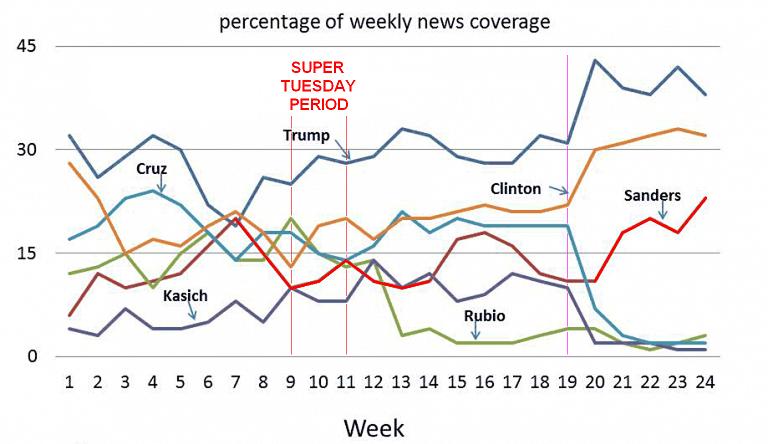 Two things become immediately clear as highlighted in red. First, Bernie Sanders coverage dropped off during the most critical primary period, and second, despite a small bump in the “Middle Period,” coverage remained low until well after Hillary Clinton took the “presumptive nomination.” Then, coverage of Bernie Sanders inexplicably increased.

We now know that this anomalous dip was no accident.

As Wikileaks founder Julian Assange explained on Going Underground regarding recent DNC email leaks, Democratic National Committee (DNC) Chairwoman “Debbie Wasserman Schultz herself personally called up the president of MSNBC to apply pressure” upon the television network to favor Hillary Clinton in coverage. As a result of this discovery, Debbie Wasserman Schultz resigned her position at the DNC. 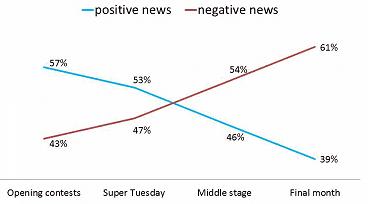 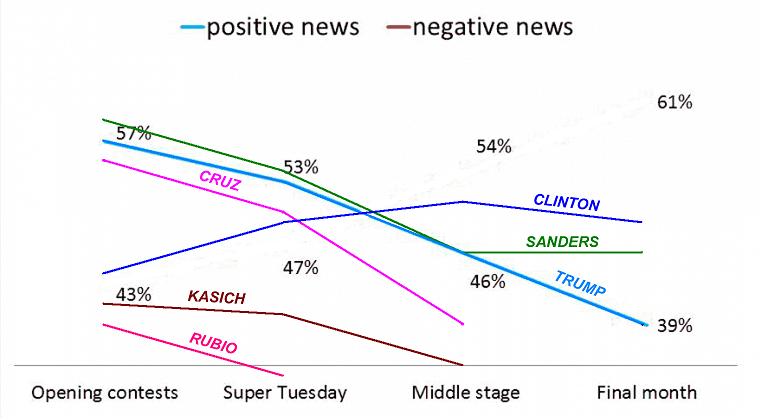 At one point, Patterson acknowledged that bias existed when he could not explain why Donald Trump received so much coverage after Trump clinched the nomination:

Although Trump no longer had active opposition, he received more news coverage in the last month than did either Clinton or Sanders, a development that has no possible explanation other than journalistic bias. Reporters are attracted to the new, the unusual, the sensational, the outrageous—the type of story material that can catch and hold an audience’s attention.

But he never noticed the favorable bias toward Hillary Clinton, and the conveniently-timed bias against Bernie Sanders. After the DNC leaks, we know it happened and we know it was deliberate. Analysis of the statistical evidence should have pointed in that direction — and it did.