Russian collusion is only the tip of the iceberg. The 2016 election situation runs much deeper. We need to look closer to home.

Steve Pieczenik has a long history of very high level “deep state” activities, as described by Darren Weeks at GovernAmerica.com:

Pieczenik is a psychiatrist who worked for the U.S. intelligence aparatus. The mere idea of that conjures up all kinds of images of MKUltra and MKNaomi -type programming. A Jerusalem Post article from 1995 says he was “deputy assistant secretary of state under Henry Kissinger (member of the globalist Council on Foreign Relations, and the globalist Trilateral Commission), Cyrus Vance (CFR board of directors member) and James Baker (CFR member). Pieczenik’s expertise is foreign policy and international crisis management”. Is his video an effort to manage the current crisis?

Such connections are supported with citations at the Darren Weeks article and at Wikipedia. Wikipedia adds, “In 2013, Pieczenik spoke on Alex Jones’s radio show denying the Sandy Hook shooting ever occurred, labeling it a ‘false flag’ operation.”

Steve Pieczenik released this ominous video on November 1, 2016, to an internet audience of more than three million viewers (text continues below):

FIRST, Steve Pieczenik declares that there is a coup attempt by Democrats:

This coup was done silently and very effectively through two methods: corruption and co-optation. The Clintons have been involved in co-opting our White House, our Judiciary, our CIA, our Federal Bureau of Investigation, our Attorney General Loretta Lynch, and our Director of the FBI James Comey for some time now. What they’ve done is make sure that they were part and parcel of a group of people who were interrelated through political cronyism.

His claims do not make a case that such a coup was underway. Having accused the Democrats of a coup attempt, the deep state operator provides his solution — a counter-coup:

However, in order to stop this coup, we in the intelligence community and others involved have informally gotten together and with their permission I am beginning to announce that we initiated a counter-coup through Julian Assange and WikiLeaks …

Steve Pieczenik implicates Julian Assange as a willing player in the 2016 coup. He goes on to say the “deep state” provided the DNC emails to WikiLeaks — the very deep state that Donald Trump supporters claim to oppose.

We decided that there was something that we had to do in order to save the republic. So we initiated a counter-coup through Julian Assange who’s been very brave and really quite formidable in his ability to come forth and provide all the necessary emails that we gave to him in order to undermine Hillary and Bill Clinton… I am just a small part of something far bigger than myself…

Finally, he admits that the operation to install Donald Trump into the White House was a “far bigger” operation — a large cabal. Steve Pieczenik needs to be investigated and deposed under oath about this stunning information. Russian collusion is the smaller part of the story.

It is no wonder that Donald Trump and his Republican cohorts backed off of every promise that fell outside of the Koch brothers agenda. 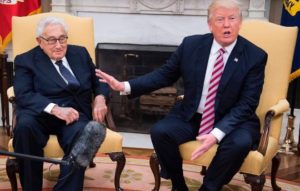 It is no wonder that establishment Republi 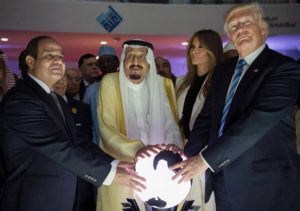 cans have been very friendly to the Donald Trump agenda — backing his every cabinet appointment — all the while grumbling for public consumption and enthusiastically stealing a Supreme Court seat. The centerpiece of Republican complicity rests squarely with establishment Republican Senate Majority Leader Mitch McConnell.

Republicans will not release Donald Trump unless and until it becomes a political necessity to do so. Devin Nunes, an establishment Republican in charge of an “independent” investigation of the Donald Trump campaign, actually visited the White House to protect Donald Trump. After recusing himself, Devin Nunes is still involved in undermining the investigation.

Donald Trump pursues the long-standing Republican agenda while dismissing his promises of a “terrific” health system in “Trumpcare,” and he does so with the assistance of the dreaded “deep state” and the discredited Republican establishment.

As becomes more clear every day, the Donald Trump campaign attempted to collude with Russians. But, first, Donald Trump colluded with deep state operatives and establishment Republicans. This is the bigger story, and one Democrats cannot afford to ignore. The gaming of elections must stop.

A Harvard study [PDF] described the Tea Party: “During President Obama’s first years in office, the Tea Party rubric has enabled conservatives to rebrand their ideology and mobilize their grassroots in new ways.” As it became evident that the Tea Party was little more than a flavor of same old Republican agenda, the group fell out of favor.

The Donald Trump administration is trying to buck the tide of demographic changes with false claims of voter fraud and a campaign of voter suppression from his election commission to possible census cheating.

Donald Trump himself is the same dirty trick as the Tea Party– a fraudulent outsider — a replay of the phony opposition of the Tea Party 2010. Fooled again.

Pictures in story come from respective CNN and New York Times articles linked in the text.