With the support of Bernie Sanders, a new organization — Our Revolution — launched officially on Facebook. The keynote speaker was Bernie Sanders. The event was hosted at 2600 video locations around the nation, and was viewed by some 200,000 people.

The new group will be supporting candidates and ballot initiatives in the 2016 election and beyond. The website lists current endorsements. Bernie Sanders selected a few to highlight during his speech:

As Americans, our goal must be to elect progressives at every level, and I want to mention just a few of the progressive candidates who Our Revolution will be supporting. And there will eventually be over 100 of them in every region of our country, candidates from the school board to the United States Senate.

Vernon Miller, a native American, is running for the school board in Nebraska. And let me tell you we need hundreds of candidates all over this country to run for school board. So I wish Vernon the best of luck.

Jane Kim is a member of the San Francisco Board of Supervisors and she is running for the state senate in California. By the way, their state senate districts are like the equivalent of the entire state of Vermont. So, it’s not a small thing. you know. I campaigned with Kim when I was in San Francisco, and she will be a great addition to the California State Senate when she is elected.

Mari Cordes, who we just heard from. our very own Mari. I think everybody knows Mari. I’ve known Mari for many years. She is a nurse. She is a trade unionist. And she is gonna win her seat in Addison County. So we are very appreciative.

Zephyr Teachout. Yeah, I think Zephyr grew up in Vermont, didn’t she? Yeah. And she is now running in a very tough race for the U.S. Congress in New York State. And she will be taking on a very very well-funded gentlemen, somebody who just received a half a million dollar check from a hedge fund manager. And we all look forward to seeing Zephyr in the United States Congress.

In 2014, Zephyr Teachout ran in the Democratic primary for the New York Governor position. She received an impressive 34 percent of the vote against the sitting governor, Andrew Cuomo. 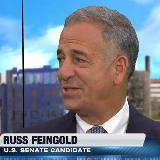 Russ Feingold lost his Senate seat in the 2010 election in Wisconsin to Ron Johnson. This year, he is running for his old seat back in a straight-up rematch. Russ Feingold is most famous for being the only Senator to vote against the USAPatriot Act in 2001.

Now, I just mentioned these five names to give you a flavor, to give you an example of what we are trying to do. In fact, there are other candidates for Congress, other candidates for state legislature, the senate and the house in various states that we are supporting. These are just five that I mentioned. But in fact at the end of the day as I understand it Our Revolution will be supporting over a hundred candidates…

Immediately upon mentioning these five candidates, and despite his specific caveat that these were just to give us a “flavor,” the press blew up with this notion that Bernie Sanders turned his back on Tim Canova, a Democrat running for the U.S. House in a primary against Hillary Clinton supporter Debbie Wasserman Schultz.

There are over 100 candidates being supported by Our Revolution. Bernie Sanders could not name them all. Rather, the list he came up with represented a diversity of positions: school board, state house, state senate, federal house, and federal senate. A dozen of the people on the Our Revolution endorsement list are running for US House of Representatives. It makes perfect sense that he would mention someone other than Tim Canova to help spread the publicity around. But the press wants to make it a scandal.

There are about 125 statewide ballot initiatives coming up in November. As I understand it, Our Revolution will be focusing on seven key initiatives which are of enormous importance to the particular states involved, but also significant for the entire country. In my view, there is nothing more important that we can as progressives than overturn the disastrous Citizens United Supreme Court decision.

Right now, right this moment as we speak, the Koch brothers, the second wealthiest family in America, extreme right wing family, are spending hundreds of millions of dollars to make certain that the U.S. Senate and the House remain in Republican hands.

In addition to that, especially given the assault on voting rights by Republican governors all over this country, we have got to move toward automatic voter registration. The simple truth should be that in America if you are over 18 years of age or older, you are registered to vote, end of discussion.

In Alaska, in this election, there will be a proposal called Measure 1 [PDF] which will bring 50,000 new people into the voter registration files in that state almost immediately. 50,000 for a small state like Alaska is a lot of people. That is the kind of effort we need to see succeed in Alaska and all across this country. We want more people participating in the political process. We want to make it easier for people to vote, not harder, so supporting this initiative in Alaska is a smart move I think.

In California which is a little bit larger than Alaska, in California there is a Proposition 61 which will address one of the major health care crises facing this country, and that is I mentioned earlier, the outrageous cost of prescription drugs. What California is proposing is that their state government not pay any more for prescription drugs than the Veteran’s Administration does. And the Veteran’s Administration pays less than almost anybody in America because they negotiate costs with the pharmaceutical industry.

If that proposal can pass in California, and by the way, the pharmaceutical industry is gearing up to the tune of tens of millions of dollars to try to defeat that because they know its significance. But I am glad to see that there is going to be a major effort to try to pass that important ballot item.

In the state of Washington, there is a proposal that will be on the ballot that has the voters there going on record against Citizens United, and that is something that I think should be supported.

After years of legal wrangling, there will also be a Citizens United inspired initiative in California, buried in a ballot with nearly 40 referendums. There may also be a campaign funding reform initiative in Miami-Dade County Florida, if the counting is completed in time.

Further, there is an important ballot initiative in Colorado which calls for a single-payer health care system. It is absurd, it is beyond belief that here in America we remain the only major country on Earth not guarantee health care to all people. If that proposal can win in Colorado, I believe that idea will spread around the country, and Our Revolution is, as I understand it, supporting that ballot item.

And obviously in the months and years to come Our Revolution will be involved in one important fight after another. We have got to stand with our brothers and sisters all over this country in the fight to reform a broken criminal justice system, and for comprehensive immigration reform, and also to end the injustices that are currently taking place against the Native American people all over this country.

Right after the meeting a dispute between founding members became public as eight members resigned. A debate was held in the morning on Democracy Now.

Organizing Director Claire Sandberg said that she and the others resigned due to two main concerns:

Claire Sandberg also suggested that the organization “would not be well-run given how we saw he ran the campaign.” It is notable that Jeff Weaver was in the driver’s seat when the Bernie Sanders campaign exceeded nearly all expectations. Claire Sandberg said that she would find other ways to support a “political revolution.”

When Amy Goodman, host of Democracy Now pressed Larry Cohen about the lack of mention of Tim Canova at the launch event, he said:

I’m certain Tim Canova is on the initial list that was put up on the website last night… Bernie has not campaigned since the convention in Philadelphia for anyone. He is actually writing a book. So I don’t think he’s running away from Tim Canova at all. I think the question is, ‘When does Bernie go back on the campaign trail?’ That is not what Our Revolution will manage.